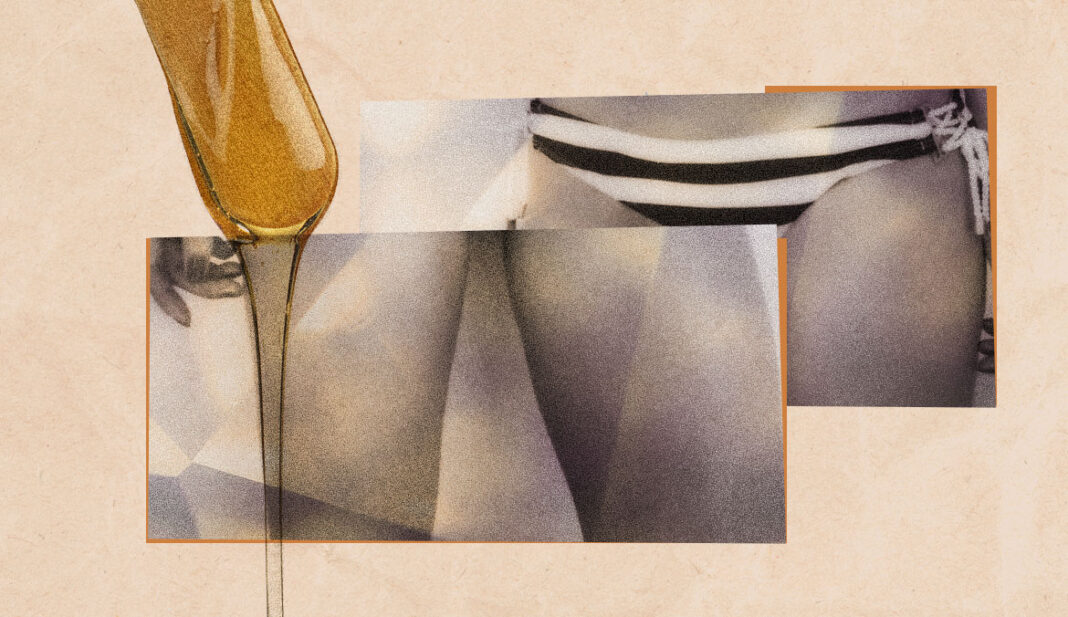 My mother used to say “beauty is pain.” She chanted the phrase as she combed knots out of my tender head while I writhed in pain between her thighs. Years later, I repeated that same mantra to myself when I laid on the table for my first Brazilian bikini wax, my vulva bared as the esthetician ripped hair from my pores until I bled.

I wound up on that table because everyone swore up and down that waxing was “the only thing that would get rid of my ingrown hairs,” and promised it would hurt less the more I did it. After my waxer ripped off the first strip, though, I was ready to bolt—It felt as if I was being stabbed by a thousand tiny needles. The pain felt like a hum of heat over my vulva and pelvis, and hurt so much I couldn’t even put my underwear back on.

For centuries, women have been conditioned to believe that beauty should come with a certain level of suffering. Throughout history, we’ve repeatedly seen them sacrifice their comfort for the sake of what society deems beautiful— drinking arsenic for the sake of clearer skin, swallowing tapeworms to lose weight, or using lead powder to cover up acne, to name a few examples. All of these practices have (understandably) fallen out of style, yet painful hair removal processes have stood the test of time.

Women have been removing their pubic hair since ancient Egyptian times, when they used everything from flint stones to sugar paste to get the job done. This set a standard that carried through to the Greek and Roman empires, where hairless bodies (which were often achieved by burning or tweezing individual follicles) were immortalized in stone, and has transcended into our modern world. A 2016 study found that 84 percent of women in the U.S. between 18 and 65 remove some or all of their pubic hair—and I can only imagine many of them repeating “beauty is pain” on the waxing table every four to six weeks, just like I did.

Yet according to dermatologists, there’s good reason to embrace “big bush energy,” despite what society may have you believe. “The hair that’s in our armpits, groin, and legs is actually evolutionarily serving its own helpful purpose,” Rachel Nazarian, MD, a board-certified dermatologist with Schweiger Dermatology, previously told Well+Good. “Hair prevents skin from irritation when it rubs against itself, protecting from chaffing in many areas of our body, especially in the underarm area. Hair also prevents different pathogens from invading our body, such as in the pubic area.”

Thankfully, in the last decade, the painful dedication to being “bare down there” has—slowly, but surely—started to change. In 2015, FUR launched a line of products specifically designed to care for pubic hair, and in the years since brands like Bushbalm and Truly have followed suit with pubic-care offerings of their own. Just this year, razor brand Billie recently published a children’s book titled A Kids Book About Body Hair (which came on the heels of its 2018 “Project Body Hair” campaign), and Venus launched its viral “Say Pubic” campaign along with a line of pubic-care products as a way to destigmatize the conversation around women’s body hair.

The queer community—which was talking about pubes long before they came trendy—has also helped push this movement forward. Body hair is central to gender expression, and LGBTQ+ celebs like Amandla Stenberg, Miley Cyrus, and Halsey have proudly showcased their body hair in public. They’ve made it clear that suffering through a bikini wax (or any other form of hair removal) is entirely up to me.

“For years, as women, we have been conditioned to make choices for our partner or what would make us more attractive to someone else,” says Angelica Sele, founder of Angelica B Beauty, a body-hair positive salon in Los Angeles. “We want to break the mold on the idea that ‘beauty is pain,’ [so that women] can make choices based on what they like. It is high time for women to stop living according to the beauty standards of others.”

What you decide to do with your body hair is your choice—but my singular experience getting waxed made me decide once and for all I will no longer subscribe to the idea that “beauty is pain.” Getting hair ripped out of my genitals for the sake of living up to a certain societal standard of beauty? No thank you. Because when it comes right down to it, beauty is who you are—and that should be painless.