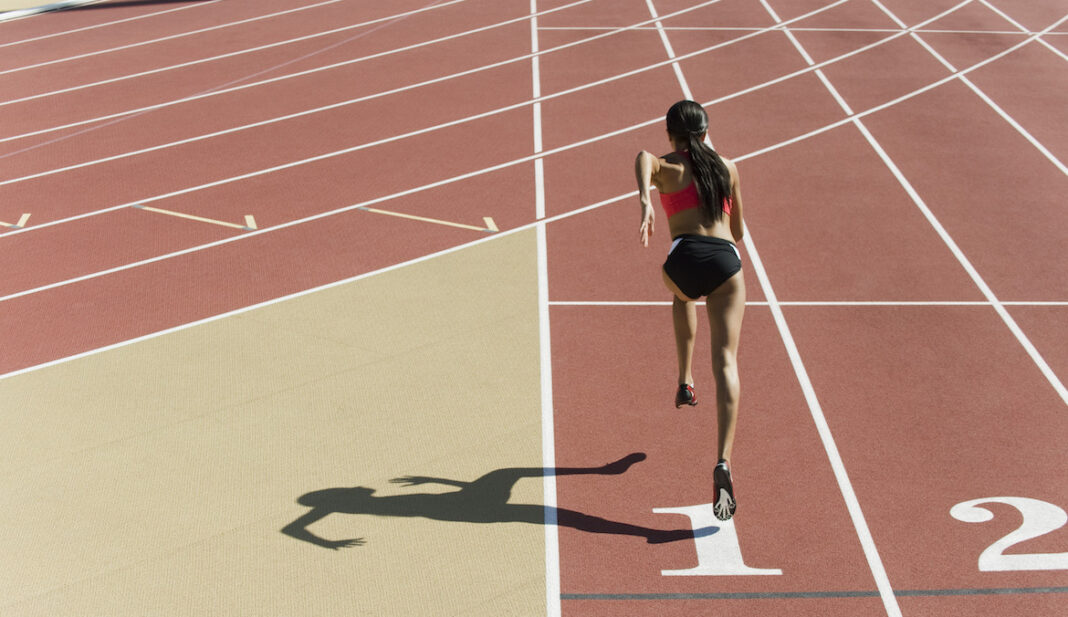 Along the Willamette River in Eugene, Oregon during the track and field world championships last month, one runner finished 2.45 miles in 31 minutes, 22 seconds, for an average pace of 12:46 per mile. When the runner crossed the finish line—a crack on the sidewalk across from her hotel—she whooped and smiled while walking it out to catch her breath. Obviously, this runner was not among the elite athletes competing close by at the University of Oregon’s Hayward Field. The runner was me.

This accomplishment felt extra fulfilling because, since coming to Eugene to attend the championships as part of a media group hosted by Nike, I’d found myself questioning: Was I really a runner? Being surrounded by some of the best sprinters in the world—as well as memorials and memorabilia dedicated to the sport of running (Eugene, aka “Track Town, USA,” also happens to be where Nike was founded) prompted somewhat of an identity crisis in me.

After all, I’d only begun running at the start of the pandemic, and I was just getting back into it after sustaining an ankle injury earlier this year. I hadn’t even worked my way back to three miles yet. All of this was on my mind during a running shoe fitting, which may explain why I opened up about where I was in my own running journey to the fit specialist.

“It doesn’t matter if you’re finishing a mile or a marathon, the feeling of accomplishment is still the same,” they said.

“I guess,” I replied as we took my new sneakers for a test run.

It’s not the first time I’ve heard this—it’s a sentiment Coach Bennet, the narrator of the Nike Run Club guided runs I typically take back home, echoes frequently. But maybe it was a reminder I needed to hear before watching sprinters and hurdlers and steeplechasers achieve breathtaking feats at the championship the next day.

My runs, I realized, were about the experience of running, not the finish line (or the time).

By far the race that stuck with me the most was the women’s 5,000 meters—the 5K. This was a distance I ran frequently, so I had some context for what they were doing. But these women ran a 5K in under 15 minutes—that means they were nearly three-times faster than me. They looked so powerful. How in the holy hell could anyone do that? It was impossible not to compare myself, even though the women running around the track optimize every part of their lives to run that fast. But then, I realized to my surprise, I wasn’t envious. No, I didn’t need to get faster. No, I didn’t need to “train.” I just needed to run.

I thought back to my run along the river the previous day. I had gone less distance in so much more time than the pro athletes crushing the 5K. But I had also watched a dog play in the river, relished the time I got to run in the shade, felt the breeze on my face, explored a new city. My runs, I realized, were about the experience of running, not the finish line (or the time). And while I did care about my pace and performance, it didn’t define whether I’d had a good run. That’s the joy of a hobby, I suppose. The enjoyment is the achievement.

What professional runners do is incredible, inspiring, the personification of everything the human body can do when pushed to its limit. Now, I know I can appreciate that, without needing to feel bad about my own sport. In fact, I feel even better. I remember during that Eugene run feeling a thrill of excitement: Hey, I’m running in the same place as the best runners in the world. How cool! I hope I can always keep that appreciation for athletes. They’ll do them, and I’ll do me.

The 20 Best True-Crime Documentaries on Hulu

Lightyear: Why Isn’t Tim Allen in the Movie?