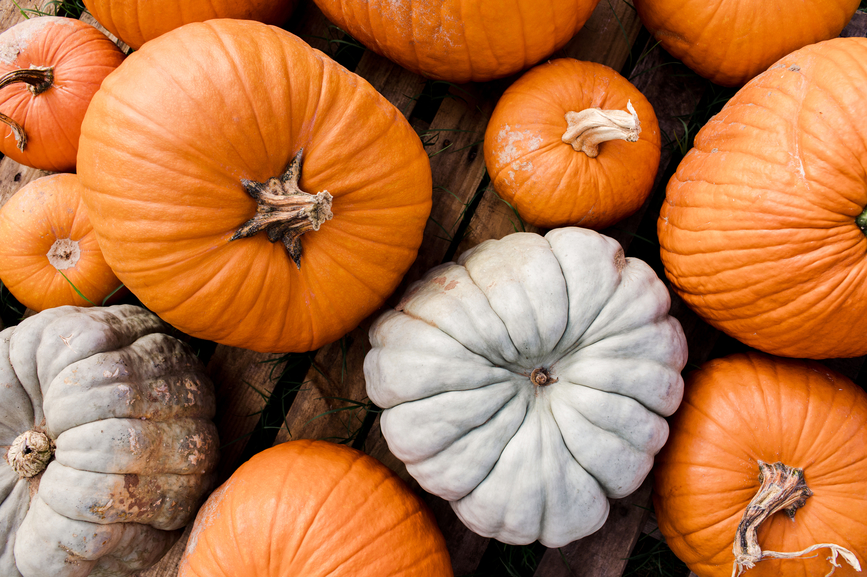 A seasonal trip to the local pumpkin patch can include fun activities, like haunted hayrides and petting zoos. But when it comes to choosing the ideal pumpkin to take home—whether for cooking or displaying—confusion and anxiety can run rampant if you don’t know what you’re looking for. Much like picking a partner—or, heck, even a watermelon or avocado—being able to choose a perfect pumpkin can get overwhelming because of all the options (Cinderellas! Jarrahdales! Warty Goblins!). But thankfully, there’s help to be had for picking the right one.

Natalie Andelin, farmer and co-founder of Andelin Family Farms, in Sparks, Nevada has guidance to offer for how to choose a pumpkin, given that the farm grows between eight and nine acres of pumpkins per year. Below, get Andelin’s top tips for how to choose any pumpkin, whether you’re cooking and carving it.

5 essential tips for how to choose a pumpkin

1. It should feel heavy for its size

“You want it to feel nice and heavy for its size,” Andelin says. So, make sure to pick up your pumpkin to assess its weight before committing to one.

2. Make sure its stem is intact

“Once pumpkins lose their stem, they start to deteriorate,” says Andelin. So, as you look to choose a pumpkin, avoid those with damaged or missing stems, and make sure to keep the stem intact on the one you ultimately select.

“Once pumpkins lose their stem, they start to deteriorate.” —Natalie Andelin, pumpkin farmer

“When the stem is pulled from the top, you see this gap,” says Andelin. “It’ll start to mold right in that circular spot where the stem was.” Although a pumpkin can stay perfectly ripe for several weeks or even months, it won’t be long before it starts to get mushy if the stem is missing.

3. Avoid options with signs of frost

Andelin says certain pumpkin varieties have thicker skin and can handle a light frost. But, she recommends looking for signs of heavy frost exposure, which can present as a wet spot on the pumpkin’s surface. Areas that freeze during a frost can get damaged and become mushy as the frozen spots thaw out.

“If we know there’s going to be a be a hard freeze, we try to cover the pumpkins with tarps and blankets,” she says, which helps keep the frost from ruining pumpkins and creating those unwanted, spoilage-prone soft spots. So, if you’ve already selected your pumpkin and are displaying it outside, keep this in mind to lengthen the squash’s healthy lifespan.

Make sure the pumpkin you’re choosing has the appropriate coloring for its variety. “If it’s meant to be green, you want it to be that nice green,” Andelin says. With that in mind, it’s helpful to know what kind of pumpkin you’re looking for beforehand and what it should look like.

Take a polar bear pumpkin for example: It’s meant to be as white as paper, yet it can easily “sunburn” or yellow if left out in the sun for too long. (This also means that after selecting one of this variety, you’ll want to keep it in a shaded area unless you don’t mind the color change.)

5. Steer clear of pumpkins with cuts (unless it’s the look you’re going for)

According to Andelin, pumpkins can scar over and naturally heal any gashes they get while growing. In fact, some growers even intentionally scar pumpkins to create unique designs on the surface. However, once it’s cut from the vine, an unhealed gash will dry out and possibly contribute to molding.

The 3 best pumpkins for cooking

“You can technically cook down any pumpkin,” Andelin says. However, certain types have thicker, darker, and richer flesh, which can be better for baking needs. According to Andelin, the best pumpkins for cooking include sugar pie pumpkins, Cinderellas, and Jarrahdales.

Sugar pie pumpkins (or sugar pumpkin or pumpkin pie), are on the smaller side, at about five to seven pounds,” Andelin says. And to pick a sugar pie pumpkin with the most flavor, you’ll want one that’s darker.

In addition to being a great option for sweet dishes, sugar pie pumpkins work great for savory eats, too. Think: soups, roasting to serve as a side dish, or even grilling them.

For a pumpkin sweeter than the sugar pie, the yellowy-orange Cinderella pumpkin is the way to go, as “its pulp is lighter and sweeter,” Andelin says. “This one’s really good for pies and soups.”

“Jarrahdales are really good ones for baking down, too,” Andelin says. “They’re a beautiful dusty sage-green on the outside, but on the inside, the flesh is orange, almost like butternut squash.” Not only are these visually stunning pumpkins delicious, but they’re also wonderful for decorating your home.

How to choose the best pumpkin for carving

Although Andelin Family Farms produces about 20 varieties of pumpkins (eight to nine of which are meant for carving), choosing the best for carving ultimately relies on personal preference. Some of the most popular options on the farm are Cinderellas, Jarrahdales, Warty Goblins, and Midnight (which are black pumpkins); however, choosing the best depends on the look that you’re going for, Andelin says. No matter what, though, you’ll want to pick an option that feels firm and doesn’t have any soft spots to ensure it’ll last as long as possible.

In addition to being firm, make sure a carving pumpkin has a sturdy bottom and can stand up on its own. The last thing you want is your delightfully spooky jack-o’-lantern spontaneously tumbling down the porch steps. You also might also opt for a pumpkin with a flatter side to make for easier carving.

The best way to store pumpkins to lengthen their lifespan

“Store pumpkins in a cool place, like a garage or basement, if you’re storing them more long-term,” Andelin says. However, if you’re looking to display your pumpkins outside, she recommends placing them in a shaded location or somewhere away from direct sunlight.

If kept in a cool, shaded area, she says that uncut pumpkins can last upwards of a few months. “Once you carve it, [however], it’s only a matter of three to five days before it starts deteriorating.”

So much pumpkin, not sure what to make? How about this gluten-free pumpkin bread: