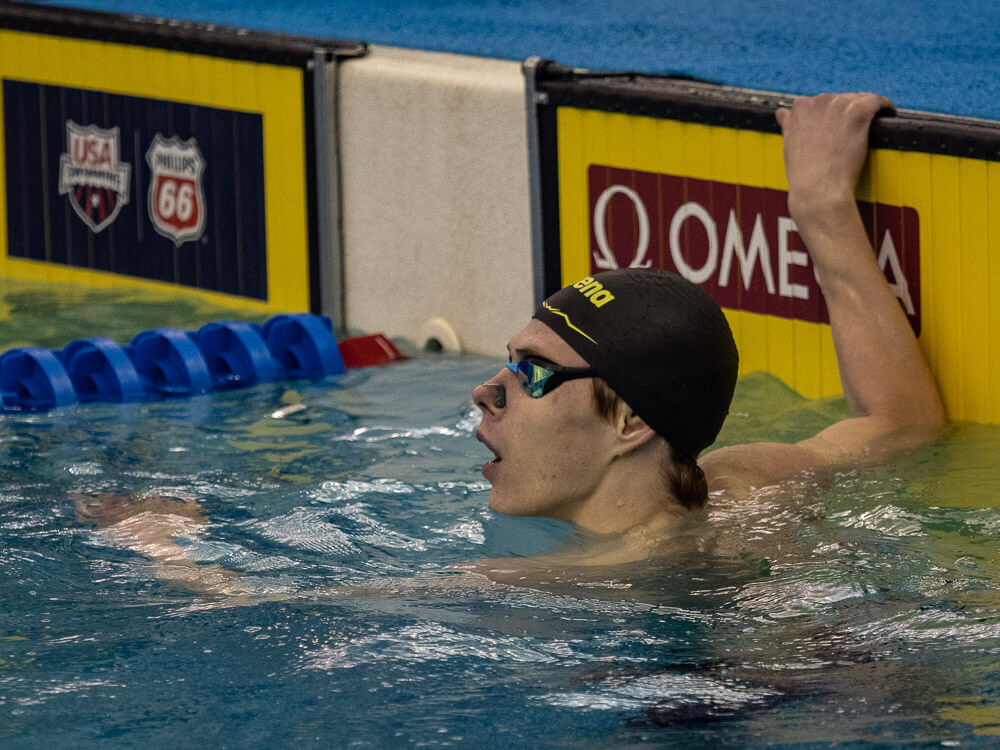 In the men’s 100 backstroke at U.S. Junior Nationals Thursday evening in Irvine, Calif., a pair of swimmers went under the meet record established by Hunter Armstrong in 2019, two years before his surprise qualification to the U.S. Olympic team in the event.

Firestone Akron’s Jonny Marshall was in first place by a half-second at the 50-meter mark, but Zionsville’s Will Modglin tracked down Marshall on the back half and pulled ahead. Eventually, Modglin got the win in 54.41, knocking off Armstrong’s mark of 54.97, while Marshall came in at 54.72, also under the record. Third went to Flood Aquatics’ Josh Zuchowski in 55.18.

An extremely tight finish in the women’s 200 freestyle went to Tide Swimming’s Kayla Wilson, who added to her earlier triumph in the 100 free. Mission Viejo’s Justina Kozan led for the entire race, but a strong finishing surge by Wilson got her to the wall in 1:58.69, just ahead of Kozan’s 1:58.80. Longhorn’s Jillian Cox, who won the 400 and 800 free, also closed hard to take third in 1:58.95.

An anticipated showdown in the women’s 100 backstroke went to Elmbrook’s Maggie Wanezek. Carmel’s Berit Berglund was out three tenths ahead of Wanezek, but Wanezek came over the top on the back half to get to the wall in 1:00.46, her best time by three tenths, while Berglund settled for second in 1:00.85. Those two swimmers will represent the U.S. in the event at the Junior Pan Pacific Championships later this month. Irvine Novaquatics’ Teagan O’Dell placed third in 1:01.40.