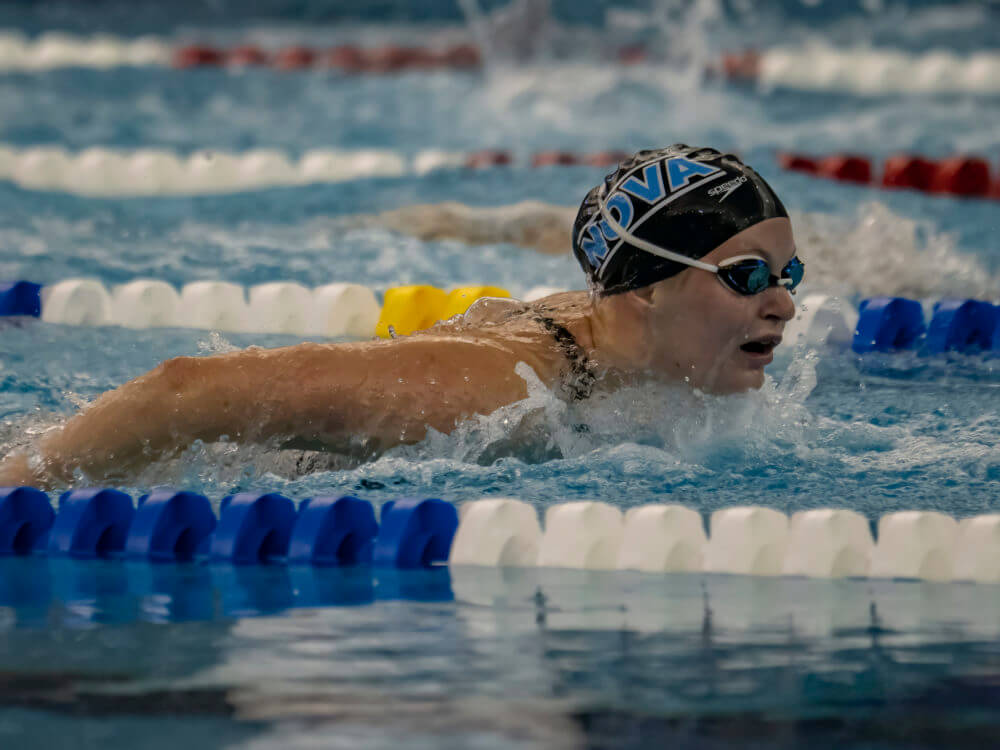 The August issue of Swimming World Magazine traditionally honors the High School Swimmers of the Year. The road to selecting the honorees is long, as high school seasons – across all states – stretch from September through May. Before we present the feature stories on this year’s winners, here is a look at our Swimmer of the Year Runners-Up.

Teagan O’Dell just finished her freshman season at Santa Margarita Catholic High School in California. Most freshmen are looking to find their spot on a team or even reach a bigger stage, but O’Dell entered high school already competing on the biggest stage in U.S. swimming.

At just 14, she competed at the U.S. Olympic Swimming Trials in Omaha, Neb.—something very few swimmers that young have ever done, especially in five events. O’Dell took that speed to her high school, where she continued to dominate swimmers her age—and older.

At the California State Championships (CIF-Southern Section Division I), she won the 100 yard backstroke in 52.27 before claiming the top spot in the 200 IM as well, touching the wall in 1:55.15. Her IM time, which broke the Division I record, was the second-fastest time nationally this past season, while her backstroke time was a hundredth of a second off the CIF-SS record time. Both of her performances were fast enough to place her second in the nation in combined power points (353.3).

O’Dell started swimming competitively at age 7 for the Chino Hills Sharks before joining Irvine Novaquatics. In August 2019 as a 12-year-old, she took down Missy Franklin’s 11-12 girls national age group record in the 200 meter IM, clocking 2:18.69 at the Western Zone Age Group Championships to erase Franklin’s 2:19.12 mark set in 2008. In USA Swimming’s 13-14 age group, she has the top all-time long-course rankings in the 100-200 backstroke and 200-400 IM. Meanwhile, she was also second in the 50, 100 and 200 freestyles, making her one of the most versatile teenagers in her sport.

“She is very aware of her training, fully understanding her pace, speed and technique, and utilizing each training set to maximize her workouts. She enjoys racing and takes full advantage of her peer group to challenge and be challenged,” Irvine Novaquatics coach Ken LaMont told Best Version Media (BVM) Sports.

As a high school swimmer, O’Dell got considerably stronger in the water, thanks to a weightlifting class that supplemented her training in the water.

“It’s a fun class,” she told the Orange County Register. “I focus on my core when I’m lifting because it’s good for swimmers to have strong core muscles. I do upper body, lower body, explosiveness (exercises) and squats for pushing off those walls.”

The added strength combined with her already record-breaking speed could have staggering effects in the years to come. Already one of the top prep stars in the country—with three more years of high school remaining—O’Dell will definitely be a swimmer worth watching.

Quintin McCarty wanted to leave a lasting legacy in his final high school swim meet. Swimming at the Colorado 4A State Championships, the senior from Discovery Canyon High School in Colorado Springs did not disappoint, breaking two state records on his way to a pair of individual titles.

McCarty, who has committed to North Carolina State, won the 50-yard freestyle in 19.48, going a hundredth of a second faster during prelims. In the 100 freestyle, he won in 43.23, while his time in prelims was again a little faster at 43.07. He also led off the 400 free relay in prelims with a 42.73 (42.63 altitude-adjusted) and led off the 200 medley relay with a backstroke split of 21.56. Both of McCarty’s sprint freestyle times earned him No. 1 national rankings this season.

“I had such a great experience,” McCarty told Gazette Preps after the state meet. “This was only my second year swimming for Discovery Canyon. I learned so much—and this sport, I owe it all to my parents and God. At the end of the day, they’ve helped me get where I am. “Being able to help my team was amazing. If I can make anyone around me better, then that’s the best.”

McCarty’s coach, Joe Fanthorp, told Gazette Preps: “(Quintin) was well-respected on the team, despite not being with us all four years. I tried to put him in a challenging position. He goes to meets and wins races by multiple body lengths. I tried to stretch him out and make the meets harder for him, and put pressure on him.”

McCarty did not swim on the high school team his sophomore and junior seasons because of COVID and his focus on the U.S. Olympic Trials.

“Having the flag on the side of your cap is one of the most amazing feelings,” McCarty said. “The experience (at Trials) was amazing, but right after, I started to look at high school swimming again.”

What to Eat Before a Workout or Yoga Practice