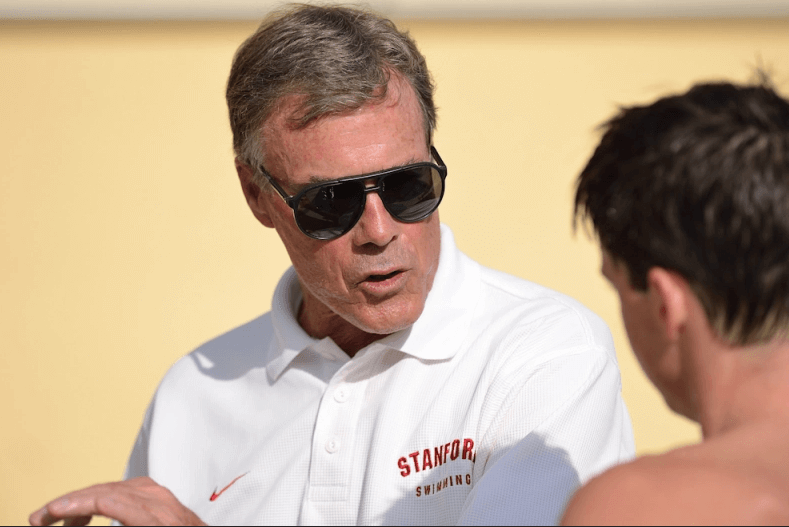 According to sources, Kenney died on Sunday night at age 79 after a short time in hospice care.

Kenney was one of the most successful college coaches of all time. He was also the head Olympic coach in 1996 in Atlanta and was an assistant coach on the 1988 and 1984 teams, coaching 18 Olympic swimmers who totaled 16 Olympic medals during his career.

At Stanford, he led the Cardinal to seven NCAA championships and was inducted into the International Swimming Hall of Fame (ISHOF) in 2004, then in 2005, the American Swim Coaches Hall of Fame. He is also a member of the Fresno Athletics and Stanford Athletics Halls of Fame.

Born Feb. 24, 1943, Skip Kenney grew up in Fresno, California attending Fresno High School, playing baseball and doing a little diving. Upon graduation, he joined the U.S. Marines, went through boot camp and served in Vietnam in the mid-1960s.

Kenney’s first swim coaching position was as Don Gambril’s assistant from 1968-1971 at Phillips 66 Long Beach. He also coached at Long Beach State during that time. When Gambril moved to Harvard University so did Kenney, and he stayed there for one season before taking his first head coaching position at the Houston Dad’s Club in Texas. After a few years, he moved to Charlie Keating’s Cincinnati Marlins where he coached Renee Magee and Charles Keating, Jr. to the 1976 Montreal Olympics and Glenn Mills, Bill Barret and Kim Carlisle to the 1980 Olympic Team that was never able to compete due to the boycott.

In 1979, Kenney became the head coach of the Stanford University men’s team, a position held for 33 years before he retired in 2012. He led the Cardinal to a record 23 PAC-10 Conference titles. He is a 15-time PAC-10 Coach of the Year, coached 93 All Americans to 785 All-America honors and developed over 63 NCAA champions.

In 1992, Stanford scored a record 632 points, routing Texas by 276 points for its fourth title in eight years. At the meet alone, Cardinal swimmers set seven American records as it marked the first time a program had swept all five relays. A repeat was on in 1993, as the Cardinal came to the Championships following its 12th-straight Pac-10 title. The Cardinal came away with three individual titles and three relay titles. In 1994, Stanford racked up 566.5 points to beat Texas, winning five individual titles and three more relays.

In 1994, Stanford again ran away from the rest of the field, finishing with 599 points in 1998, the second-most in school-history. The Cardinal had a finalist in each of the 18 finals, winning eight of them.

“Coach Kenney is one of the iconic figures in college swimming and he has had a profound impact in shaping the lives of hundreds of young men,” said Stanford Director of Athletics Bob Bowlsby in 2012. “Skip has always been a coach that put the team first and in doing so, he has taught lifetime lessons about how to weave the fabric of a high achieving organization.  The Stanford Men’s Swimming Program under Coach Kenney’s guidance has established many standards that will never be equaled in the PAC 12 or nationally”

“Skip will leave a long-lasting legacy of leadership and excellence from his incredible career here at Stanford,” senior associate athletics director and swim administrator Earl Koberlein said upon Skip Kenney’s retirement. “He not only won championships, but he produced great men.  To paraphrase many of his former student-athletes, “He made us better men, husbands and fathers”.”

Foods for Scalp Health from a Dietitian and a Trichologist

Is Your Body the Legal Property of Big Pharma?