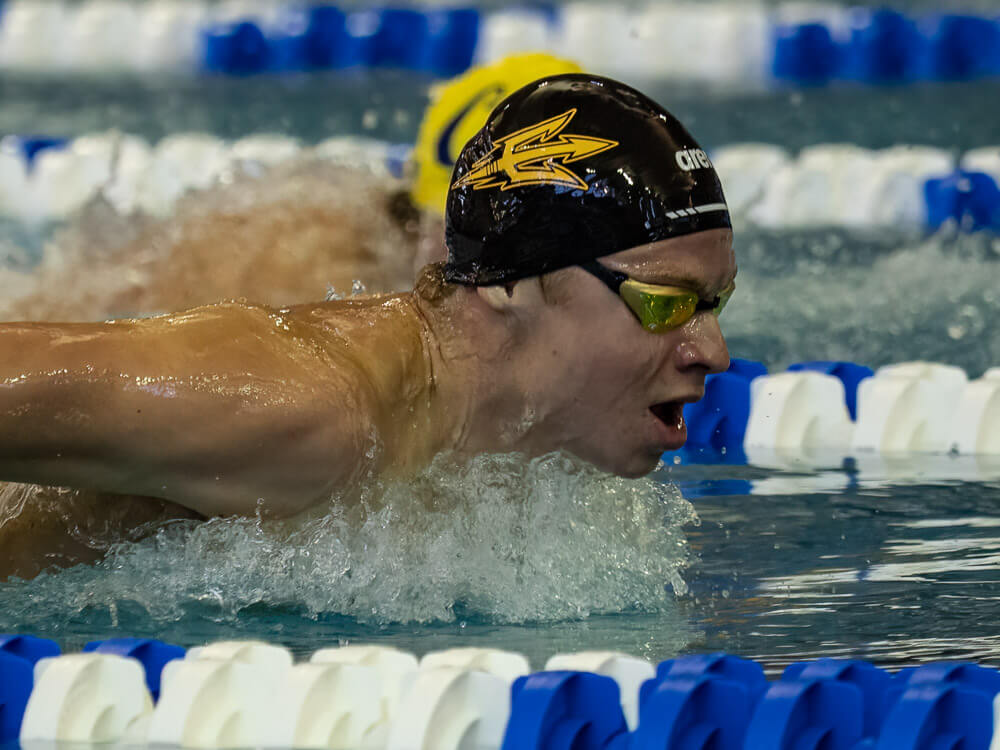 When Leon Marchand arrived in Tempe, Ariz., last fall, he had already entered the elite ranks in the 400 IM with a sub-4:10 performance at France’s Olympic Trials (a national record by more than five seconds) and an appearance in the Olympic final in Tokyo. Arizona State head coach Bob Bowman had plenty of reason to be excited about Marchand’s potential, but who could have envisioned the brilliance that Marchand would produce over the last 12 months?

The performances have been chronicled here at length, most notably Marchand’s efforts at the World Championships in Budapest where he nearly took down Michael Phelps’ 14-year-old world record in the 400 IM, claimed a second world title in the 200 IM and established himself as the best-of-the-rest in the 200 butterfly behind Kristof Milak’s world-record-breaking swim. And surely you did not forget Marchand’s swims during the college season, a run that culminated with a pair of NCAA titles as he swam the fastest time ever in the 200-yard IM and became the second-fastest man ever in the 200-yard breaststroke.

To recap: In the fall of 2021, Marchand represented intrigue but uncertainty. Now, he’s a bona fide candidate for top swimmer in the world. The only knock on this 20-year-old originally from Toulouse, France, is that he has yet to break an individual world record. But rest assured, Marchand will join the world record club before long. That’s an easy call to make, especially when the man has dropped more than 10 seconds in the 400 IM over the last year. The improvement track will undoubtedly taper off, but he’s less than a half-second off the GOAT’s 400 IM pace.

Bigger picture, his success over the last year has placed Marchand in the spotlight as a potential face of the 2024 Olympics in Paris for the home nation.

But enough about Paris for now. We will have plenty of time to examine every last detail of the buildup to those all-important Games. The present is the new college season, and Marchand occupies a very different standing in the NCAA landscape than last season. As he maneuvers through intrasquad meets, dual meets and invitationals, all eyes will be on the clock for his results. There is a new normal for the seemingly inconsequential moments of the season. Such is the price of success, which Americans Caeleb Dressel, Ryan Murphy and Bobby Finke all experienced in recent years in their post-international-breakthrough returns to college swimming.

First up was an Arizona State “pentathlon” that involved swimming 100 yards of fly, back, breast, free and IM within less than 90 minutes, and Marchand finished with the fastest combined time by two seconds, while Grant House was the only other swimmer within seven seconds. Chase Kalisz, the 2021 Olympic champion in the 400 IM and now a training partner of Marchand’s in Tempe, was almost 14 seconds off the pace.

Marchand is hardly known as a sprinter, although he does fill relay roles for both the Sun Devils and the French national team. But it’s September, and he’s already swimming within a second of the marks needed to score in 100-yard events at the NCAA Championships.

Perhaps Marchand will feel the pressure over the course of the next six months or perhaps not. For swimming fans, however, following Marchand’s results throughout the season will be a privilege, akin to the “What Can Caeleb Do?” season following Dressel’s seven-gold-medal performance at the 2017 World Championships. Dressel ended up swimming the fastest time ever in five different events that year.

So what can Marchand do? His 400 IM swims will be building up to another showdown with Texas junior Carson Foster at the NCAA Championships in Minneapolis in March. Marchand will enter as the strong favorite, and he will be targeting the NCAA and U.S. Open records of 3:32.88 that Hugo Gonzalez set last year. Can he dip even lower into the 1:37s in the 200 IM? Will Licon’s top 200 breast mark of 1:47.91 is surely on borrowed time, and after Marchand’s long course success in the 200 fly, he would surely be the NCAA-title favorite in that event as well (if he were to opt for that race instead of the 200 breast).

The long haul of the college season will take Marchand and his Sun Devil teammates east next week to Athens, Ga., to face Georgia and Missouri. Maybe Marchand finds his way into a 200 fly showdown with fellow World Championships finalist Luca Urlando of the Bulldogs? If he wants to try his hand at the 500 free, this meet would be a very good chance with 2021 NCAA champion and 2022 runnerup Jake Magahey in the pool. Marchand’s first mini-focus meet of the season will come in mid-November with another trip east for the NC State Invitational in Greensboro, N.C.

Of course, Marchand’s legacy in swimming will be judged off his long course success in international water, and most outside of the United States place little value on the short course yards competition in college racing. Marchand actually had never raced in short course yards until September of 2021, but he is already on track to produce one of the most compelling college careers by an international swimmer in recent memory.