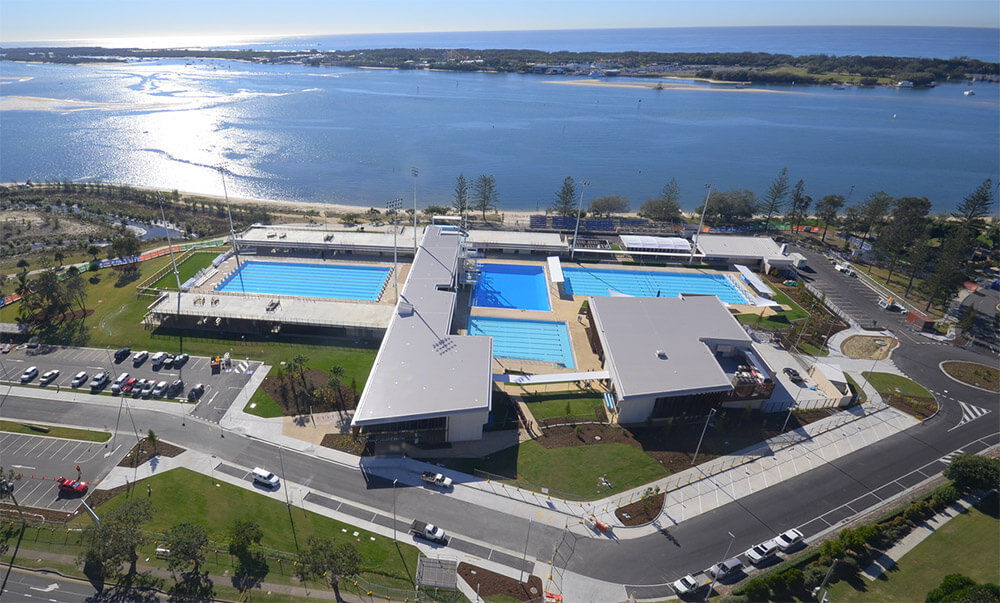 The cream of Australia’s Olympic and Paralympic swimmers will converge onto the Gold Coast Aquatic Centre next April for the 2023 Australian Open and Age Swimming Championships.

Swimming Australia will bring the stars of Tokyo and Birmingham to the Coast’s premier venue for 14 days of swimming action between April 7 and 20.

It is the latest event to be hosted in the South East Queensland precinct which is gearing up to become the epicentre of big time sport in the run up to the 2032 Olympics.The largest annual event on the Swimming Australia calendar, the Australian Championships will attract thousands of athletes and spectators to one of the country’s premier swimming venues.

The 14-day meet will bring together some of Australia’s most elite Olympic and Paralympic athletes, alongside the next generation of stars, in a completely integrated program for multi-class and able bodied swimmers.

The Gold Coast Aquatic Centre is already the training venue for Olympic gold medallists Emma McKeon, Kaylee McKeown and Mack Horton who are all entrenched in the high profile Michael Bohl training group at the Swimming Australia hub. Queensland has become the centre of swimming excellence and remains one of the world’s most successful swimming regions in the world, with the Gold Coast, Brisbane and the Sunshine Coast producing and attracting Australia’s finest swimmers.

Just two weeks ago over 400 delegates converged onto the Gold Coast for the annual Swim Coaches And Teachers Australia Conference which will return to The Star Gold Coast from September 16-18, 2023.

The Gold Coast Aquatic Centre has played host to the 2014 Pan Pacs, the 2018 Commonwealth Games and the 2021 Australian Age and Open Championships.

Swimming Australia is also due to announce details of next year’s Trials for the 2023 Fina World Championships set for Fukuoka between July 14 and 30 with an announcement set in the coming weeks.

In announcing the 2023 event, Swimming Australia CEO, Eugénie Buckley, said it was exciting to have the event amalgamated once again.

“The Australian Championships are a wonderful celebration of our sport at all levels and it’s fantastic to see it delivered as a fully integrated event once again following the challenges of these past few years,” Buckley said. “To see our leading Olympic and Paralympic stars alongside that next wave of talent is not only an illustration of the incredible depth in Australian swimming, but also the enduring passion for our sport across the country.”

“We are very fortunate to host an event of this scale at a world leading high performance hub like the Gold Coast Aquatic Centre, which will provide a fitting stage for what will undoubtedly be an outstanding fortnight of performances.”

The event has the full backing and support of the Queensland State Government and Gold Coast City Council.

“I’m excited about securing the biggest annual event on Australian swimming’s calendar for the Gold Coast in 2023,” Mr Hinchliffe said.

“More high-performance sport is looking to Queensland to maximise the opportunities of our green and gold runway to the 2032 Games and beyond.

“The Queensland Government is committed to attracting more elite events like the 2023 Australian Championships to deliver an early 2032 Games legacy.

“Swimming’s 2023 Age and Open Championships will bring more than 5,000 competitors and spectators to the Gold Coast and invest $5.26 million in the visitor economy.

“Upgraded for the 2018 Commonwealth Games, the Gold Coast Aquatic Centre is a terrific example of infrastructure legacy supporting jobs, the visitor economy and Queensland’s great lifestyle.”

The event will also be delivered in conjunction with Major Events Gold Coast, continuing the fantastic relationship between Swimming Australia and the City of Gold Coast.

“It’s a huge coup to have another national championship at Gold Coast Aquatic Centre as it underscores the legacy benefits of hosting the games almost five years ago,’’ said Gold Coast Mayor Tom Tate.

“I’m thrilled to see the 2023 program will integrate able-bodied and para-athletes. In 2018, we set the benchmark for this format through our GC2018 Commonwealth Games program, and the tradition continues.’’

Australia will also play host to the 2022 Fina World Short Course Championships from December 13-18, when the best swimmers in the world arrive into the Melbourne Sports And Aquatic Centre – its first World Championships since the 2007 World Long Course, also held in Melbourne.