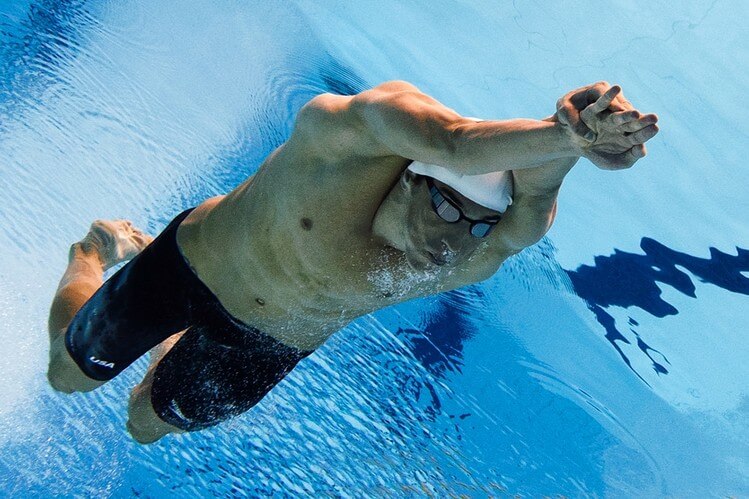 The Fifth Stroke: Dolphin Kick Drills That Can Improve Performance

In recent years, we have consistently watched the sport of swimming develop and grow as we discover ways to become faster. One of the biggest discoveries is the importance of dolphin kick, an aspect of swimming that was explored in a documentary by the Olympic Channel.

Almost every successful swimmer can look at their use of dolphin kick as a reason behind their speed. Swimmers like Caeleb Dressel and Michael Phelps are known for staying under the water as long as they can off of each turn. Backstrokers try their hardest to dolphin kick as close to the 15-meter mark as they can without getting disqualified.

In the video below, you can see a swimmer prove that dolphin-kicks are among the fastest way of getting through the water; he beats his opponents by a sizeable distance (while getting disqualified for it along the way).

When discussing the importance of dolphin kick, the swimming community tends to focus on a swimmer’s underwater kicks in backstroke, freestyle, and butterfly races. Coaches are constantly screaming at their swimmers to stay underwater off each wall and strengthen their underwater kicking to get a leg up on the competition.

What many people do not realize is that dolphin kicks can be used to improve even more than just your efficiency underwater. The power that the dolphin kick releases can be utilized in a lot more areas of swimming, whether in use of drills or in race strategy. Here are a few drills and strategies to capitalize on speed for your next race.

When thinking about breaststroke, it is rare that the first thing that comes to mind is dolphin kick, seeing as you are only allowed one off of each turn. However, the powerful motion of the undulation in dolphin kick is essential to having a strong breaststroke. Because of this, it can be very useful to practice breaststroke drills that include dolphin kick while in practice.

This drill is simple in theory. What a swimmer does in this drill is breaststroke arms with a dolphin kick, focusing on the shooting motion of their arms to the front. The point of this drill is to use the dolphin kick to bring your arms to the front faster, shooting oneself forward like a cobra. Once the swimmer converts back to normal breaststroke, their turnover should be quicker and more powerful. To get a better understanding, below is a YouTube video of the cobra drill in action, published by The Race Club (a swim club run by Gary Hall Sr., former Olympian).

Click on the video example below to see the Karla Drill in action:

Dolphin kicks can also be useful in parts of races that people don’t normally think to use them. A few coaches and high level swimmers have discovered new areas of a swim where they can utilize their strength in dolphin kicking even more to improve their speed in a race.

When racing sprint freestyle, swimmers always want to maintain a fast turnover; however, this can be hard at the end of a race. Even in races as short as a 50, swimmers will often slow down their turnover without even realizing it. To prevent slowing this turnover and increasing their speed, swimmers have taken to incorporating dolphin-kick freestyle at the end of their race. Using freestyle arms and dolphin kick can force a swimmer throw their arms around much quicker than when they do freestyle kick. The reason swimmers do not choose to do this all the time is that it can be very tough to maintain. Part of the reason it is hard to keep this technique sound is that a swimmer cannot breathe while doing it, or the rhythm will be broken. Phelps has been known to use this technique in the last 10 meters of his 100 freestyle. In another Race Club video by Gary Hall Sr., he explains in greater detail the technique and the improvements it can make to one’s race.

In today’s generation of swimming, it is essential that one perfects and strengthens their dolphin kick. Experts are going so far as to even call the underwater dolphin kick the “fifth stroke”. While dolphin kicks are very important when pushing off each wall, the undulating motion of dolphin kicks is so powerful that it should be utilized in other areas of swimming, both in drill work and other areas of racing strategy. Swimmers should definitely think about using these methods the next time they hop in the pool.

Use Menopause Cooling Spray To Get Quick Hot Flash Relief