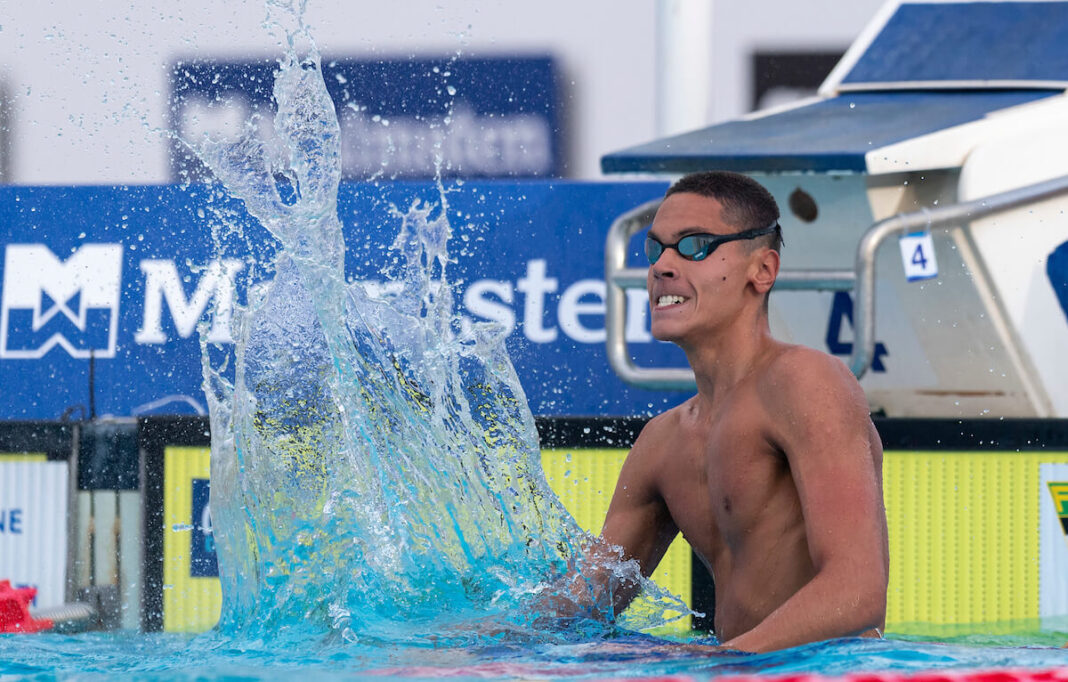 Another evening. Another title. Another sub-48 performance for David Popovici in the 100-meter freestyle.

As the European Junior Championships came to a close on Sunday in Bucharest, the 17-year-old Romanian repeated as the gold medalist in the 100 freestyle. The reigning world champ in the event, from last month in Budapest, Popovici had no trouble securing a second straight Euro Juniors crown, this title delivered in 47.69. Great Britain’s Jacob Whittle was nearly a second back for the silver medal, going 48.69 and the bronze medal went to Cyprus’ Nikolas Antoniou (49.67).

By winning the 100 free, Popovici capped a week in which he also claimed individual gold medals in the 50 freestyle and 200 freestyle, and repeatedly impressed. He produced multiple sub-48 markers in the 100 freestyle, including a best of 47.34 on the leadoff leg of Romania’s mixed 400 free relay. At the World Champs, he turned in a best of 47.13.

Popovici is scheduled to race the European Championships next month in Rome, where he could take aim at the continental record in the 100 free. That standard is held by Russia’s Kliment Kolesnikov at 47.11. Certainly, Popovici has embraced a busy summer schedule, and each of his outings has become an opportunity for the youngster to display his vast talent and status as a headliner in the sport.

Another stellar performance was turned in by Poland’s Ksawery Masiuk, who won the 100 backstroke and completed a sweep of the backstroke events. Masiuk covered his two laps in 52.91, which was more than a second faster than the 54.26 of Ukrainian Oleksandr Zheltyakov. Masiuk was a finalist in the 100 backstroke at the World Champs.

The highlight of the women’s competition was the 1:06.50 registered by Estonia’s Eneli Jefimova in the 100 breaststroke. Jefimova surged to a lead of more than a second on the opening lap and cruised to a victory over France’s Justine Delmas (1:08.80). Meanwhile, in the women’s 100 backstroke, a tight battle was won by Hungary’s Dora Molnar over Belgium’s Roos Vanotterdijk. Molnar touched the wall in 1:00.88, with the Belgian following in 1:00.90. The Bronze was won by France’s Mary-Ambre Moluh (1:01.36).

Turkey’s Merve Tuncel followed up her triumph in the 800 freestyle with a first-place finish in the 400 freestyle. Tuncel was timed in 4:07.30, which was comfortably faster than the 4:11.77 of Italian Giulia Vetrano. The men’s title in the event went to Italian Lorenzo Galossi, who touched in 3:48.14 to beat Poland’s Krzysztof Chmielewski and Romania’s Vlad-Stefan Stancu, who tied for silver in 3:50.61.

Vanotterdijk added a silver medal in the 50 butterfly, as her 26.63 was behind only the 26.49 of Bosnia’s Lana Pudar. On the men’s side, gold went to Denmark’s Casper Puggaard in 23.67. Great Britain’s Leah Schlosshan clocked 2:13.49 to win the women’s 200 individual medley and Ukraine’s Volodymyr Lisovets was the gold medalist in the men’s 100 breaststroke in 1:00.96.

Back and Shoulders 💪 #shorts #workouts