Coaches Weigh In On Non-Traditional Training 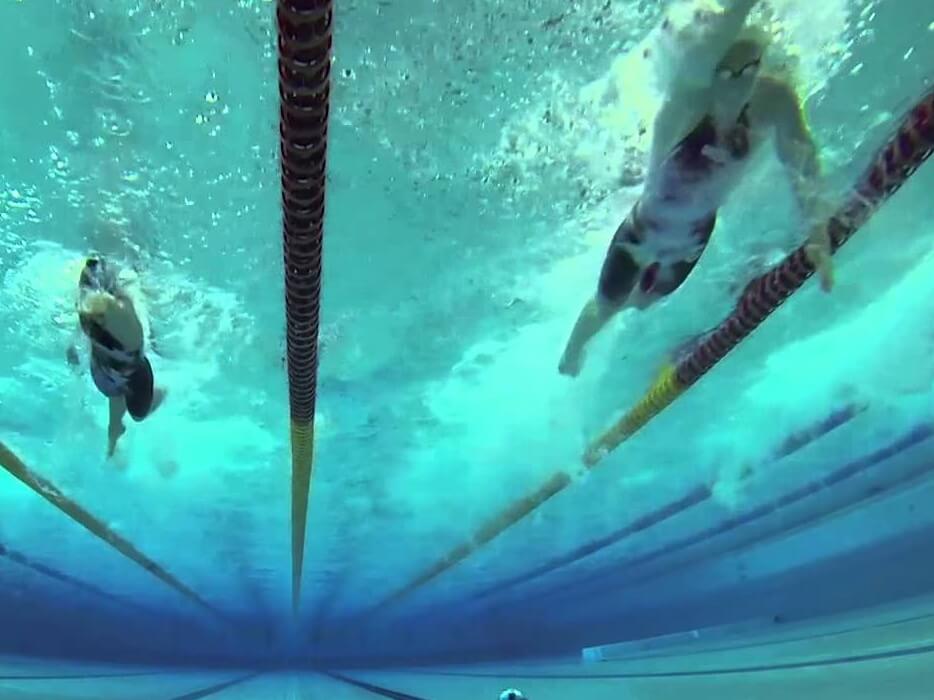 Previously, Swimming World examined reverse periodization from an intellectual perspective. Here, some of America’s most recognized club and college coaches share their views on training with this untraditional model.

As communicated in Part I on Reverse Periodization, any discussion of the subject, reverse and otherwise, requires definition: Classic (or traditional) periodization in swimming is accepted as initial, long distance training at relatively low (below anaerobic threshold) levels followed by an increase in volume and intensity leading to a max race-pace effort while experiencing a reduction in volume.

By any definition, the goal is preparation for peak performance at a desired moment. In the simplest terms, reverse periodization (RP) is a reversal of that traditional training model.

For starters, many coaches confess confusion as to what constitutes RP (reverse periodization). Most understand the process conceptually, but to the extent they implement it (if at all) remains a disorganized exercise.

In truth, very few apply it in its purest form—i.e., as a precise reversal of classic periodization training. Why? As the GAIN Network’s director Chris Webb says: “I don’t think people actually understand what RP is. That’s common with most anything we do—i.e., USRPT.

“Unless you have read Dr. (Brent) Rushall’s papers, you aren’t doing his specific methodology because what coaches do is take pieces of something and say they are doing it, and that’s not the case. So a lot of people think RP is USRPT. RP also gets misused and misunderstood because it is oddly used in the triathlon world—because of winter training constraints in northern climes,” says Webb.

In doing research for this article, one source linked NOVA Irvine coach Dave Salo to RP. A subsequent conversation with the former USC and Olympic coach elicited this response:

“To be honest, I don’t know that I have ever heard of the phrase, ‘reverse periodization.’ My simple philosophy is that “Work Works,” as is evidenced by hundreds of years of observation. The best WORK is, in my mind, the rate of work performed. We continue to see improvements in swimming performance because, in large part, the rate of work is higher and the mechanical efficiencies are so much better than in the past.

“Periodization—or what I would term, dosing—works, but it may be more related to the psychology of palatability of dosing rather than some truly biological/physiological paradigm. I am inclined to be ‘race-pace’-associated versus periodization-associated.

“But scheduling doses of work in a scheduled manner (which, basically, is periodization) can be more palatable and predictable for an athlete rather than randomness. I am probably more random, but have become more predictable.

“This approach is predictable and palatable to the athlete. Most of this training requires intense bouts of exercise that include race-specific work as well as specific power development with the use of resistance work (cordz, parachutes, etc.),” he says.

“Answers to any questions regarding reverse periodization are probably many-pronged and mostly depend on the definition and execution. There are some different interpretations that may appear similar on the surface, but are actually pretty different in effect.

“I don’t consider what we do reverse periodization, but it has elements of what people have described as reverse periodization. We believe that establishing excellent technique is of primary importance in the beginning of a season. Coordination is critical to technical development, and we want people to be able to create great technique at all speeds. So, we do prioritize speed at the beginning of the season as an expression of technique, but not at the expense of coordination.

“The two types of work we emphasize in the beginning are:

• Aerobic (sub-threshold) conditioning as a way to repeat excellent technique
• Top speed (but not speed endurance) as a way to keep the fast-twitch muscles and overall coordination engaged.

“This type of training, as Jan Olbrecht describes them, builds the qualities of anaerobic capacity and aerobic capacity. That is what we’re attempting to create in the front half of the season. The back half of the season is for the development of power—aerobic and anaerobic—and that type of training in my experience requires a firm foundation of those capacities in order to be able to recover and adapt.”

“I’ve never called what we do reverse periodization or thought of my season planning as trying to front-load the speed work before preparation. I think the speed work we do is part of that preparation. I’ve also never associated what we do with USRPT. We have used elements of USRPT, but never followed that regimen to any extent that would say it was the dominant ideology behind the training.

“We like to do speed work both anaerobic and HVO at the beginnings of our seasons. We do that because it takes the longest time to develop. I basically have one micro cycle I use for the whole year, and I adjust the intensity of the various energy systems based off the phases. From that perspective, we still follow the traditional phases of general prep, specific prep and race prep.

“I always struggle with the pure science-based approach because we don’t coach in a laboratory. We coach in the real world where kids get sick and dragged on vacation and what not. I can see why with a mature athlete you would space out the energy systems more and allow for more capacity work early in the season, but for developing athletes, there are just some potential missed gains.

“I do believe swimming fast at the beginning of the season is beneficial for club and high school-age athletes for several reasons. The first is teaching. In my experience, kids swim differently when at race-pace speed, and that is where the skills we are trying to develop exist.

“It is difficult to do that if we spend the first phases of the season swimming only sub-aerobic and threshold-type speed. I mostly work with year-round athletes, but I would imagine that would be compounded for kids that only were swimming three to six months per year.

“Secondly, developing athletes improve at different rates. Allowing them to develop all their energy systems early in the season gives kids a chance to go fast early and mid-season and might make the difference qualifying for a state or conference meet. I believe that what makes swimmers go really fast at the end of the season versus the beginning is the periodization of the strength and conditioning, combined with the rest in the pool.”

“I don’t know that I truly plan our season with reverse periodization in mind, but there are many things that GAIN Network’s Chris Webb espouses that I believe in. These days I coach elite 15-18-year-olds with a good amount of background, so my thoughts are strictly from that perspective. I don’t think we would have the same discussion for 14-and-under athletes.

“The biggest thing that drives this for me is that I don’t believe you can endure a quality you don’t already possess. Train strength before strength endurance, power before power endurance and, most importantly, speed before speed endurance.”

“By definition, RP is the process of completing high-intensity phases without much buildup of other systems. Isolated, concentrated sprint training cycles have resulted in time drops—especially in swims up to 100 meters. I am not convinced of its effectiveness at longer distances due to the neglect of other physiological metrics—i.e., aerobic capacity and aerobic power.

“At Denison, we have experimented with it primarily because COVID and limited pool time/access was a factor. However, we are always interested in exploring effective training methods.

“I’m not convinced the training helped us in the long run. From a macro perspective, my experience with RP has mirrored/paralleled USRPT training methods. And while RP is usually associated with sprint programs, the principles can be applied to almost any training group—distance or middle distance.

“Regarding its downsides, I am always concerned about injury and maladaptation due to the overstress associated with high-intensity training. It goes without saying that swimmers must enter the protocol in good shape. Coming into the protocol in good shape almost always means—or implies—there’s been an integration with other training (aerobic) cycles. Isolating the RP effect—good or bad—isn’t always clear.

“It’s also a matter of how you define ‘high intensity’ and how it applies to each training group. I am not an advocate of the method for long-term success. My experience has shown that every swimmer needs a balance of aerobic capacity, aerobic power and anaerobic power to be successful. Those balances may be different for different events, but an athlete’s development will be stunted if any one of those metrics is ignored and/or underdeveloped.

“In the late aughts at an early season invitational, I talked to Dave Durden and Greg Meehan about reverse periodization. Their Cal swimmers had started the season swimming fast. The danger, as I understood it—and I struggled with the idea at Pacific—was that you had to have fit athletes year-round in order to really engage in RP. The reason was that to ask an athlete to go superfast required a lot of muscle coordination and a lot of stabilization to work at that stroke rate and speed in September and October, and I didn’t have it.

“We had athletes who took the summer off or were coming off a lazy time, which is very natural in a college environment. And they were in no shape to hit a stroke rate they would hit in March. And if they did, they would be putting themselves in a tough spot. And we certainly couldn’t do the dryland training that needed to go along with that.”

“I have used some version of reverse periodization, as the principles are like some of those embodied in race-pace training—something I have done my whole career working with my club and college programs. In short course yards training, you want to establish the swimming skill early in the year so you can perform at the end of the year. Learning skills is one thing. Learning them at high speeds is another. And learning them under duress is yet another.

“My athletes train to be able to perform at the level for which they are shooting. We train at the edge of it, sometimes just over, and early in the season there may be a form of reverse periodization. If swimmers came off the summer in good shape, we could really hit the speed and maybe even use suits early in the year.

“I had really good sprinters at Auburn. Coming off a summer of the Olympics or nationals, we’d review what the sprinters did well and see if we could get them to go faster—and then return to a traditional training cycle. It’s all a balance, and it still is.”

In short, reverse periodization is another form of training, one to be explored and applied under the right circumstances given athlete goals, coach philosophy, season schedule and all the other variables that influence the development of maturing athletes.

Michael J. Stott is an ASCA Level 5 coach, golf and swimming writer. His critically acclaimed coming-of-age golf novel, “Too Much Loft,” is in its second printing, and is available from store.Bookbaby.com, Amazon, B&N and book distributors worldwide.

3 Keys To Improving Balance, According to a Trainer