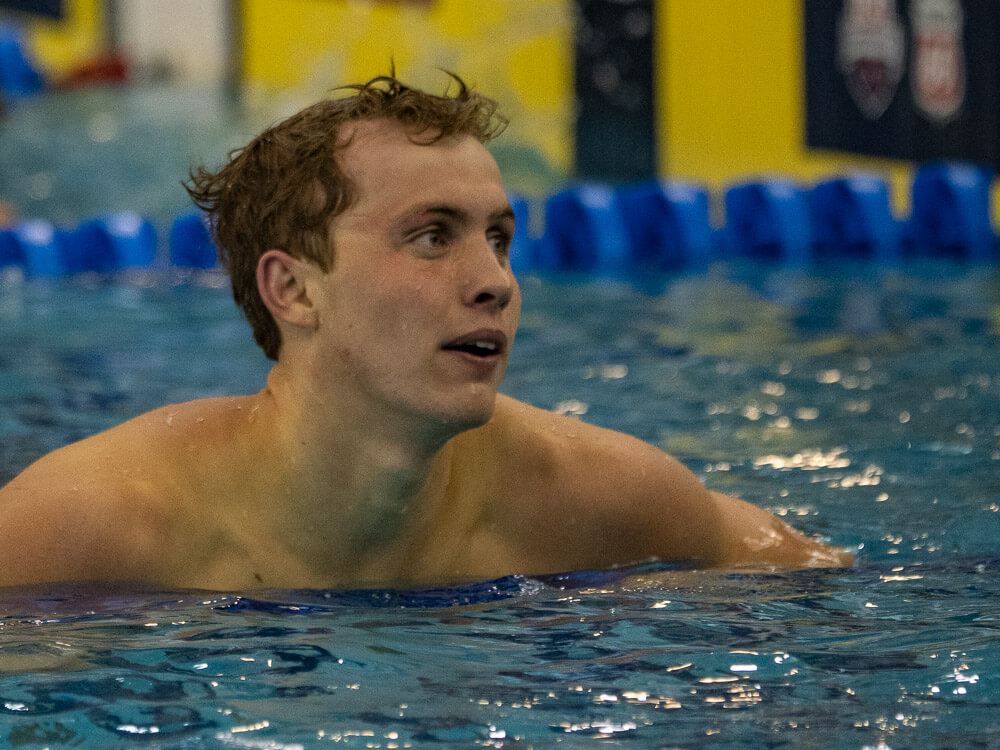 The final major college swimming invitational began Wednesday evening in Minneapolis as elite programs Texas and California joined Wisconsin, Arizona, Harvard, Pitt, UNLV and the hosting Golden Gophers. The Longhorn and Golden Bear men kicked off the meet with one relay win each while the Texas women swept their two events Wednesday.

The Longhorns were well short of the American, NCAA and U.S. Open record of 6:03.89 that they swam at last season’s NCAA Championships, but they are still the top team in the country in this event, even with individual 200 free NCAA champion Drew Kibler having graduated. Of course, it helps having two swimmers on the squad who helped the U.S. men win gold in the 800-meter free relay at this summer’s World Championships (Foster in the final and Carrozza in prelims) plus a third who captured the win in the 200-meter free at U.S. Nationals in July (Hobson).

Cal’s team of Patrick Callan, Gabriel Jett, Robin Hanson and Destin Lasco placed second in 6:10.35, good for No. 3 in the national rankings, while Lasco nearly matched Foster with a scintillating 1:30.79 anchor split. For some comparison, only seven swimmers split 1:30 or better at last year’s NCAAs, including no Cal swimmers. Meanwhile, Minnesota’s team of Chris Morris, Bar Soloveychik, Kaiser Neverman and Alberto Hernanrcia placed third in 6:16.25.

Texas placed second in this event at the NCAA Championships last year, but this was a completely new foursome from last year. The only member of the group from March 2022 still competing for the Longhorns is breaststroke specialist Caspar Corbeau, but he is missing the Minnesota meet as he is scheduled to race at the Short Course World Championships beginning in less than two weeks. Texas has already recorded a time of 1:23.83 this season at a dual meet against Virginia with Corbeau swimming butterfly alongside Foster, Chan and Krueger.

On the women’s side, the Longhorns’ team of Olivia Bray (23.79), Anna Elendt (26.49), Emma Sticklen (22.70) and Grace Cooper (21.48) clocked 1:34.46 for a one-second win. That time ranks third nationally, just a tenth behind marks posted by Virginia and NC State two weeks ago, and it exactly matched Texas’ fifth-place mark in the event from last year’s NCAA Championships (with Bray, Elendt and Sticklen all returning, although with Bray and Sticklen racing different strokes).