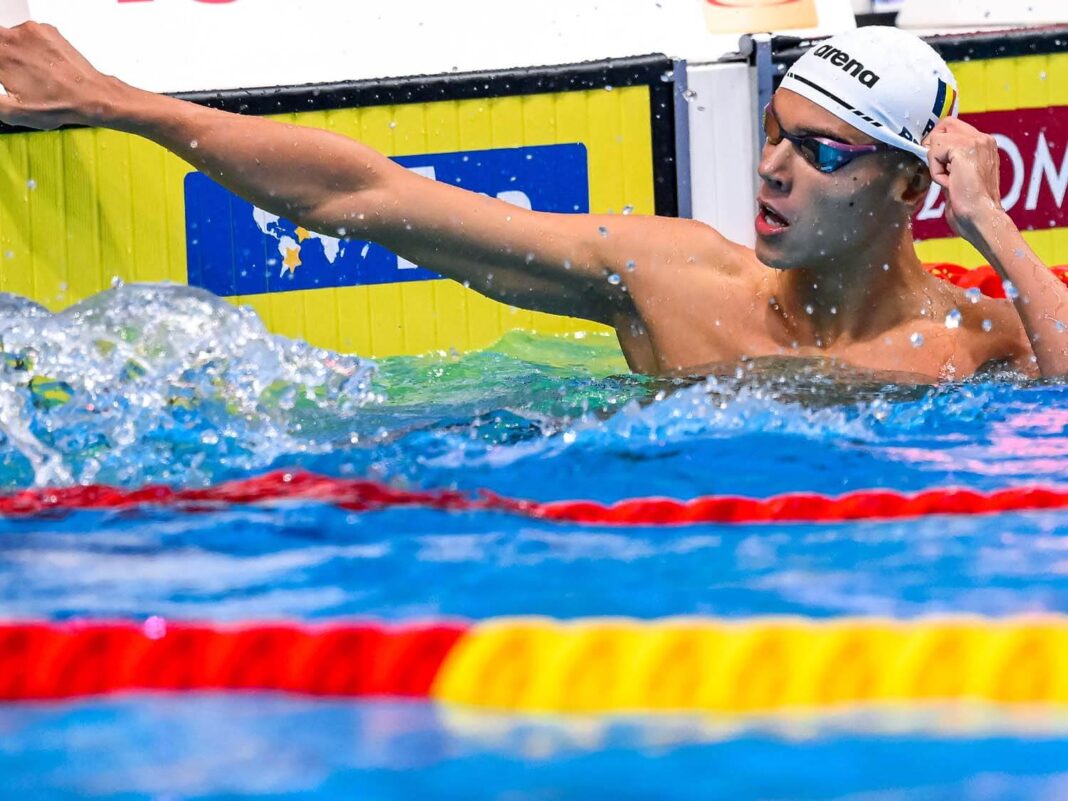 Can David Popovici Join Territory Only Known By the Likes of Biondi and Hoogie?

In 1904, Charlie Daniels pulled off the feat. Matt Biondi was successful in 1988. In 2000, Pieter van den Hoogenband got the job done. All legends, and all able to complete an Olympic Games trifecta that, thanks to enhanced specialization, is now rarely pursued – let alone achieved.

So, what is the challenge?

In the more than 100-year history of the Olympics, only three athletes – those mentioned above – have stood on the podium at the same Games in the 50, 100 and 200 freestyles. Obviously, earning any Olympic medal is a daunting task. This specific challenge is more formidable given the range of distances and event specialists required to navigate.

The topic is raised due to the emergence of Romanian teenager David Popovici, whose freestyle skill set and veteran demeanor has wowed the sport over the past year. Primarily beginning at the 2021 edition of the European Junior Championships, where he set a world junior record in the 100 freestyle, the 17-year-old’s potential has picked up momentum through each successive major competition.

While Popovici most recently swept the 50, 100 and 200 freestyles at this summer’s European Juniors in his homeland, his efforts at last month’s FINA World Championships defined his upside as a generational talent. Despite racing against some of the biggest names in the sport, and athletes with greater experience and physical maturity, Popovici captured a pair of gold medals at Duna Arena in Budapest.

Popovici’s first title arrived in the 200 freestyle, where a clocking of 1:43.21 made the teenager the No. 4 performer in history and the second-fastest in a textile suit, trailing only the 1:43.14 that Frenchman Yannick Agnel produced on the way to gold at the 2012 Olympics in London. Meanwhile, the Romanian also won the 100 freestyle, with his semifinal swim of 47.13 just shy of the European record of 47.11, held by Russia’s Kliment Kolesnikov, and within sniffing distance of the world record of 46.91, established by Brazil’s Cesar Cielo at the height of the supersuit era in 2009.

The 50 freestyle was not part of Popovici’s program at the World Championships, and the event lags well behind where he operates in the 100 and 200 freestyles. Still, he clocked 22.16 for the one-lap title at the European Junior Champs, a quality number for a kid who is lean and has plenty of room for the addition of muscle mass in the coming years.

So, yes, this article has been crafted to raise the possibility of Popovici of claiming Olympic medals across the three-shortest freestyle distances. If the feat proves too difficult to manage, the fact we are even considering the potential – in Paris 2024 or Los Angeles 2028 – is a nod to Popovici as the complete package.

Before we further assess Popovici’s hopes of attaining The Trifecta, let’s look at the individuals who have already gained entry into this elite club. Daniels was the first athlete to complete the triple, doing so at the 1904 Olympics in St. Louis. In addition to winning the 220-yard freestyle, the 19-year-old earned silver in the 100 free and bronze in the 50 free. Daniels, considered the first American superstar in the sport, actually medaled in a quartet of individual events, as he also prevailed in the 440-yard freestyle. It took 84 years for someone to match Daniels, with Biondi emerging as the successor at the 1988 Games in Seoul. Frequently compared to Mark Spitz, primarily because of his seven-event schedule and medal opportunities in each, Biondi fulfilled expectations. The 6-7 Californian mined gold in the 50 freestyle and 100 freestyle and was the bronze medalist in the 200 freestyle, an event shockingly won by Australian Duncan Armstrong. For good measure, Biondi added a silver medal in the 100 butterfly and was a member of three triumphant American relays. At the 2000 Olympics in Sydney, hometown hero Ian Thorpe was the most-hyped athlete ahead of the Games. And while the Aussie excelled, van den Hoogenband was arguably superior. Not only did the Dutchman beat Thorpe and set a world record in their head-to-head duel in the 200 freestyle, he also established a global standard and took gold in the 100 freestyle. His third medal of the competition was a bronze in the 50 freestyle, where he finished behind American co-champions Gary Hall Jr. and Anthony Ervin.

Now, is Popovici capable of joining the aforementioned Hall of Famers?

Only two years out from the 2024 Olympics in Paris, Popovici has established himself as the early favorite for gold in the 200 freestyle. By clocking 1:43-low at Worlds, Popovici has created a sizable gap between himself and the likes of Great Britain’s Tom Dean and Duncan Scott, the reigning Olympic gold and silver medalists, respectively.

As for the 100 freestyle, Popovici occupies elite territory, alongside American Caeleb Dressel and Australian Kyle Chalmers, the past two Olympic titlists. Already, Popovici boasts 10 sub-48 performances. Having clocked 47-low at just 17 years old, a visit to the 46-second realm seems like the next logical step, and going sub-47 also means threatening the world record.

At least at the moment, and in the scheme of pursuing an Olympic Trifecta, the 50 freestyle is the longshot event of Popovici’s program. Moreso than the 100 free and 200 free, the one-lapper is home to a greater number of specialists. Sure, Dressel spans the 50 and 100 distances, but stars such as Ervin, Florent Manaudou and Bruno Fratus – in recent years – have centered their attention on the 50 free.

The owner of a flawless stroke and poise that cannot be taught, Popovici is going to continue to flourish for years to come. But for the 50 free to become a legitimate medal possibility, time is necessary. Time, specifically, to enhance his muscle mass and power. Paris is probably too soon to think medal contention, which means Los Angeles is a better fit. And who knows, maybe the event is just too short.

Simply, David Popovici possesses a gift in the water, and his talent allows the mind to be entertained and the history book to be opened. Could he one day pull off the Olympic Trifecta? Maybe. Then again, maybe not.

If nothing else, the thought – and chase – is intriguing.

Moments When Famous Hollywood Celebrities Prank Each Other