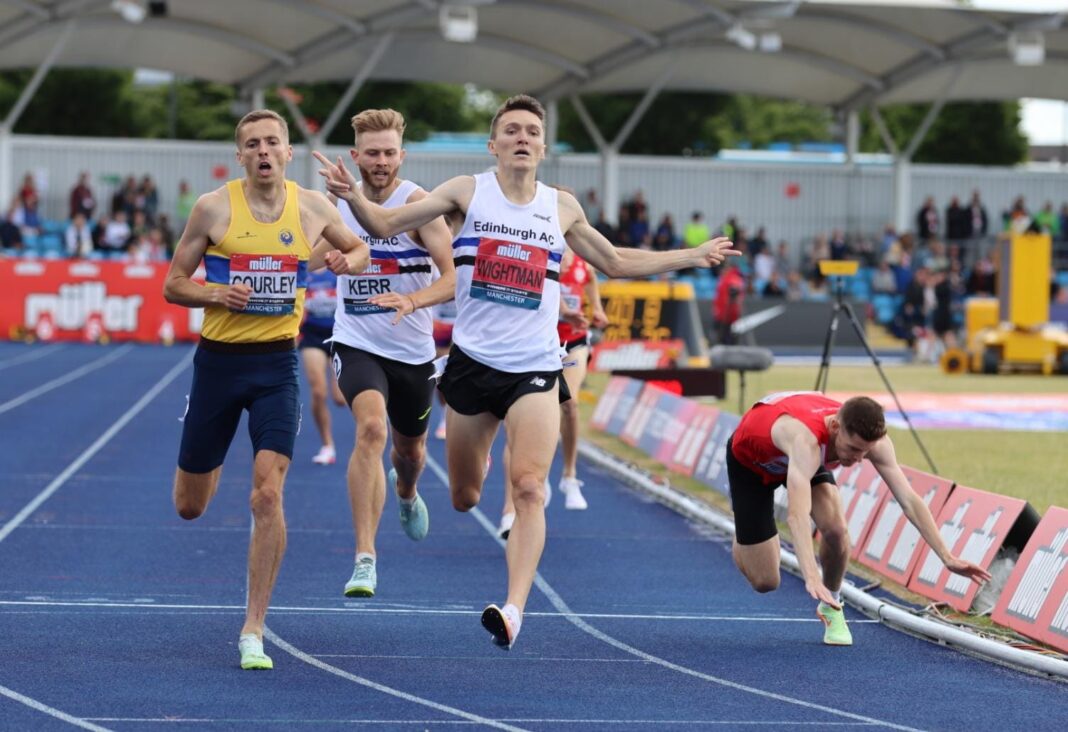 Windy conditions put paid to fast times, but the racing was no less exciting at the UK Athletics Championships in Manchester.

After finishing second in 2021, Amy-Eloise Markovc finally took her first outdoor title, adding 5000m gold to her European indoor 3,000m champion crown – running 15:37.23 for the win. Markovc already has had the qualifying time for Eugene, which means that Jess Judd. who was runner-up in 15:38.39, will also go out to Oregon. Sarah Inglis took the bronze medal in  15:39.55.

After being a little unsure of herself lately, Laura Muir was back and looking at ease. After dropping a 2:03 800m in the middle of her heat, she ratcheted up the pace in the last 500m of the women’s 1500m, taking the title of British Champion in 4:12.91. Melissa Courtney went home with silver in 4:17.72 and Sabrina Sinha earned her first senior medal in 4:19.76. Max Burgin’s winning 1:44.54 over 800m was an astonishing run and a world lead, though he has shown plenty of promise in the past. He goes to the worlds alongside Daniel Rowden who was runner up in 1:45:58. Bronze went to Kyle Langford in 1:46.34. Albon approaches the finish of the 42km. Credit: Tom Craggs

There were no other Brits on the podium across the other races at the Marathon du Mont Blanc but in the vertical km race Hannah Russell of Helm Hill finished an impressive 4th in 49:29 and Nick Swinburn finished 8th in 44:06. In the 10km race Charlie Sandison and Alison McDonald both finished 6th in 39:58 and 49:17 respectively. Charlie Sandison in action in the 10km. Credit: Tom Craggs

Tracks Around the Country

There are plenty of leagues and regional champs doing the rounds over the summer and this week had plenty of them. The Essex League 5 Mile Championships was won by Dean Williamson in 24:21, with Joshua Entwistle four seconds behind and Peter Coates third in 25:50. Madeline Barker topped the women’s podium in 30:32, with Samantha Bilbie (30:52) and Tracy English (30:58) filling the remaining places.

James Johnson ducked under 33 at the EHH Summer League Coniston 10K, clocking 32:59 for the win with Steve Bateson (33:13) in second and Ben Sadowyj third (34:48). Venika Moverley was way ahead of her competitors with her winning time of 39:25 over 3 minutes clear.

Part of the York and District Summer League, the Yorkshire Wolds 10k was won by Jordan Howe of York Postal Harriers in 32:59. Dan Tate followed him over the line, running 33:54 and James Eaton was shortly after in 34:12. 10th overall, in a storming time of 36:44 was Becky Penty of York Knavesmire Harriers, two places behind on the overall list and second female was Charlotte Mason (City of York) in 37:08. Making it a Knavesmire 1-3 sandwich, Helen Cross was third woman in 37:54.

A windy Prestwold 10k was the latest race in the Leicester Road Running League and there were standout winners in both fields -Gemma Steel was over four minutes clear, running 34:05 and Mohammed Hussein of Roadhogs was 50 seconds clear, running 32:03.

Ross Broomfield took top honours at the Leamington Spa Half Marathon, clocking 70:40 and Olivia Harris was first female in 85:29. The obviously tricky Hitchin Hard Half saw Sasha Birkin triumph for the women in 1:32:20 and James Fox for the men in 76:26.

Back up the Mountains

268 miles of ‘fun’ face those taking part in the Summer Spine Race. Anna Troup was in fine form as she defended her title and set a new course record, reaching Kirk Yetholm in 78:56:49 and was second overall for the second year running. Overall winner Tiaan Erwee obliterated the men’s course record by seven hours, making it home in 70:46:50.