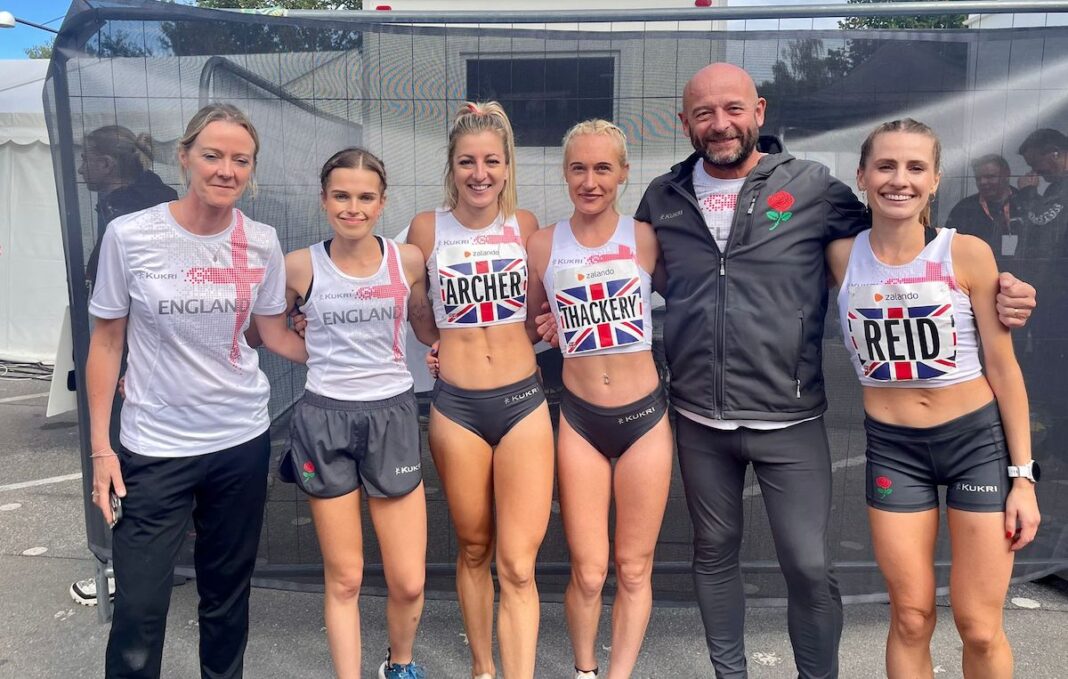 You can tell the autumn road season is in full swing when there are hundreds of races to go through (or, at least that is how it feels)! Even with many not publishing provisional results at the time of writing, there remains plenty to bring you, with a smattering of late season track events also. Let’s get straight into it!

Calli Thackery moved to 11th on the UK all time list with a stunning 69:02 at Copenhagen Half Marathon finishing 12th and first European in an incredibly strong field. Thackery was a member of the England team whose combined efforts saw them take home the Nations team title against teams from Denmark, Iceland, Sweden, Norway and Finland. The next member of the England team over the line was Lucy Reid setting a big new personal best of 70:29. Having spent a period of the team out with injury the Tonbridge athlete came storming back to take 46 seconds off her previous best. Lauren McNeil ran 71:01, taking well over two minutes of her PB, and moving her to 2nd all time on the UK U/23 half marathon rankings behind Liz McColgan. In only her second half marathon 2021 European indoor 1500m silver medallist Holly Archer also ran a big PB with 72:47. Olivia Tsim (73:38) and Verity Hopkins (74:10) also ran fine PBs to break the 75 minute barrier.

Medals for England under 20 team

The European Under 20 Road race was held at the Trofeo Opitergium in Odzerzo, Italy. England Athletics selected four women competing over 5km and four men over 10km with both teams collecting bronze medals against 13 other nations.

In the men’s race There Matt Ramsden took in individual silver and a new PB of 29:57, three seconds back from race winner French athlete Joad Martinho. The men’s team was completed by Rowan Miell-Ingram 12th in 31:13, Sam Hodgson 13th in 31:19 and Daniel Maydrew 30th in 32.57. The Yeovilton 5km Series is a popular race in the South West on the flat, fast roads around Yeovilton airbase. The latest race was won by Kate Drew in an impressive 16:28 with Taunton club mate Emma Kiernan second in 18:19 and Bethan Francis third in 18:43. Ronnie Richmond was the first man as he builds to the European 50km Championships clocking 14:55 ahead of Flynn Jennings (15:25) and Michael Parrott (15:26).

Not done this week in the results after his mid week 5km win at Yeovilton Ronnie Richmond was back at the weekend to win the South West Half Marathon Championships at Chippenham Half Marathon clocking 67:20 to win comfortably from Tom Merson (68:49) and Jacob Landers (69:19). Alice Murray-Gourlay took the women’s title in 79:14 from Annabel Granger (80:53) and Rosie Mew (80:58).

With so much happening, it is hard to know where to start, but it feels apt to begin in Wales. The Admiral Swansea Bay 10k saw an emphatic victory for Natasha Cockram (33:09), crossing the line over two minutes ahead of Megan Carter-Davies (35:17) and Lauren Cooper (35:21), with the first five women all finishing in under 36 minutes. It was a closer race amongst the men, with Kadar Omar (29:11) finishing clear of Dewi Griffiths (29:36) and Dylan Evans (29:51).

Two more athletes building to the European 50km Champs are Nigel Martin and Ali Lavender. The pair recently represented England at the Antrim Coast Half Marathon and were back racing over 13.1 miles at the Lake Vyrnwy Half Marathon. Martin took the men’s win in 65:54 from a Callum Rowlinson continues his fine form post injury clocking 66:00 with another GB&Ni representative at the 50km champs, Andrew Davies, third in 67:44. Ali Lavender took the women’s title in 78:07 from Vicky Bryant (82:41) and Lucie Tait-harris (84:08).

How do you know the London Marathon is just a fortnight away? The number of half marathons taking place both this week and in recent weeks. As runners start to taper, there are fewer to bring you, especially with a handful not publicising results on the day of their race. That said, there were some encouraging performances at the Run Reigate Half Marathon with top spots going to Alex Pointin (69:26) and Hannah Hawken (85:51). Their race may have covered less than half the distance, but their performances no less impressive as Lucy Denece (42:18) and Oscar Curry (36:17) won the associated 10k.

Across in Guernsey and to the Butterfield Half Marathon, where Jenny James (84:53) and Stephen Dawes (70:19) were quickest in the field.

The number of track-based events may be falling as each week goes by and athletes look to the roads and cross country, but a there still remains a couple of races to bring you. The Vets AC 10,000m Championships took place on Wednesday and saw Andy Bond (33:00) and Gina Galbraith (38:26) go quickest over 25 laps, whilst Juliet Potter (5:21.1) and Joseph Monk (4:41.7) recorded the fastest times at the Night of the Mile PBs in Bingham also on Tuesday.

RunThrough’s continual stream of races continue at pace, with events across the country over the past seven days. Over at the Draycote Water Running Festival, there was a winning performance by Fast Running’s own Gill Bland (84:00) over the half marathon, with Trevor Osborne (72:01) taking the title amongst the men racing. Marlon Trump (34:42) and Sarah Saxton (42:02) were first home in the 10k, with Kimberley Killeen (24:12) and George Fear (17:42) doing the same in the 5k.

A little further to the south and amongst the rollercoaster riding thrill seekers, Mike Alwin (32:03) and Georgia Holden (38:12) ran well at the Run Thorpe Park 10k, with the associated Run Thorpe Park 5k going to Adreen Hart-Rule (22:51) and Adrian Whitwam (16:18).

Rounding Up the Round Up

Ending with the Longest

It would be remis to not end the round-up with the longest race of the weekend and the Self-Transcendence 24 Hour Track Race in London. A simple challenge – how many laps can you run in 24 hours; simple but definitely not easy (or, for me, in any way appealing!). It clearly was a worthy challenge for James Williams and Sue Harrison, though, with the pair covering a distance of 240.589km and 197.724km respectively. That is a dizzying 601 and 494 laps of the track each.

Grow Your Business With Effective Email Marketing to Doctors