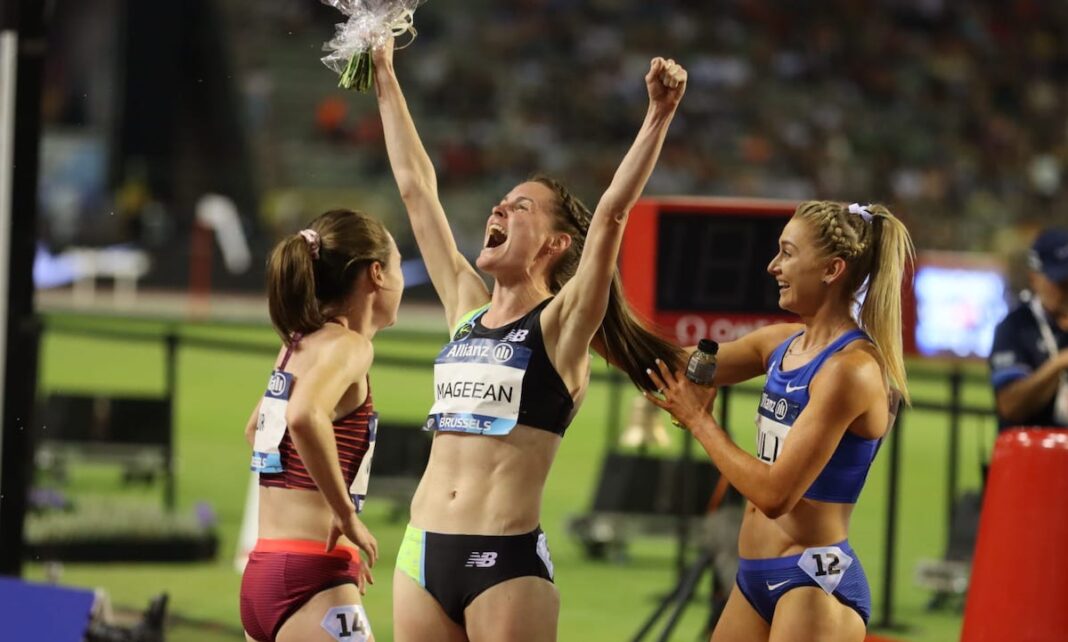 Victory and a new Irish record for Ciara Mageean when winning the 1500m at the Brussels Diamond League on Friday evening (September 2) was unquestionably the Irish running performace of an exceptionally busy week.

On a track renowned for fast times, Mageean ran the perfect race, remaining in the pack when the pacers set off at furious speed and kicking away from the field only after the bell. She took the lead on the bend and went on to win in 3 mins 56.63.

It was Mageean’s first time to break four minutes for the distance, taking 3.52 secs off the time of 4:00.15 she set three years ago in the 1500m final at the World Championships in Doha, Qatar.

It has been a dream season for Mageean, now aged 30, with silver medals at both the Commonwealth and European Championships. In both these races, she lost out to Scotland’s Laura Muir, who finished second behind her in Brussels.

A course more akin to a hard trail run ensured a record local entry for the 21st World Masters Mountain Running Championship in Co Tipperary on Saturday (September 3) – the first time any world championships race had been held in Ireland.

First home on the long course for age groups from over 35 to over 50, was Thomas Roach of Great Britain; he was also first M40. Roach was suspended for six months after an anti-doping rule violation for a positive test for cannabis in the 2021 championships.

Over a minute behind in second place and first M35 was another British athlete, Andrew Douglas. Third overall and second M40 was John Kinsella of Ireland, while fourth and second M35 was former Irish marathon champion Sean Hehir. It was enough to see Ireland win both M35 and M40 team categories.

Making it an Irish clean sweep in W35 was the trio of Kate Purcell, Laura McDonnell and Kealy Tideswell, who took the team trophy ahead of Romania and Germany. First woman overall was Britain’s Victoria Wilkinson who was first W40.

On the shorter course for athletes aged over 55 and older, Stephen Hoey in second overall and second M55 was best of the Irish, followed by Thomas Blackburn third overall and third M55, with Nat Glenn 12th (thanks for the heads-up on the correction Nat). This was enough to secure a silver team medal for the Ireland Masters M55 team.

Martin McDonald, a previous winner at world masters level, took the M65 title, while in the W65 class came yet another clean sweep for the home team, with Pauline Moran the winner, followed by Majella Diskin and Carmel Mac Domhnaill. Ireland took both team titles. Winning the M75 title was the ageless Jim Patterson of Northern Ireland, a previous M70 champion, who led GB to team victory.

In a thrilling finish to the Laganside 10km in Belfast on Sunday (September 4), Brhane Gebrebrhane of Annadale Striders outsprinted Conall McClean from St Malachy’s AC to take a narrow victory.

Gebrebrhane was given a time of 31: 32 with McClean one second behind. The pair, along with Conor Gallagher of St Malachy’s AC, had gone through 5km together. Gallagher fell off the pace in the second half of the race but held on to finish third in 31:47.

In Derry, Gideon Kimosop of 1Zero1 Enniskillen was a comfortable winner of the Waterside Half Marathon also on Sunday.

Kimosop’s time of 67:19 gave him a three minute margin over the rest of the field. Finishing second in 70:42 was Declan Reed of City of Derry Spartans who was also first M45. Third in 70:57 was Scott Rankin of Foyle Valley AC.

Catherine Whoriskey of City of Derry Spartans was first woman in 80:05, followed by her clubmate Ciara Toner in 80:19 and Leanna Gibson of Victoria and Connswater AC in 84:36.

Ciobanu’s winning time of 1:48.31 put him over four minutes clear of the chasers led by Shane O’Donnell of Rosses AC, who finished second in 1:52.51. A close third in 1:53.00 was Brendan Conway of Westport AC.

Eighth overall and first woman was Barbara Cleary of Donore Harriers in 2:05.00. Aoibhín Flatley of Swinford AC was second in 2:12.14 and Tara Malone of 1Zero1 Enniskillen third in 2:18.44.

In Ferns, Co Wexford, Peter Somba of Dunboyne AC was pushed hard at the Mick Murphy Memorial 4-Mile. After a frantic dash for the line, Somba and Evan Fitzgerald were both given a time of 19 mins 38 secs, with Somba judged the winner. In a quality race, Jamie Gahan of Kilkenny City Harriers was third in 19:50.

A day later, Somba had a easier outing when winning the Lucan 5-Mile in 24 mins 49 secs. Tomás Fitzpatrick of Tallaght AC was second in 26:22 and Pauric Ennis of Tullamore Harriers third in 27:18.

Even more on the roads

At the Ardee and District Seamie Weldon 5km, in Co Meath, Noel Williams and Karen Costello, both Dunleer AC, were the winners in times of 17:12 and 18:19 respectively.

First home at the West Waterford Greenway Half Marathon from Kilmacthomas to Ballinroad, in Co Waterford was Patrick Hennessy of host club West Waterford AC in 69:04. Paul Doran of United Striders was second in 70:9. First woman in 80:00 was Niamh Staunton of St Abban’s AC. West Waterford took both men and women’s team prizes.

In Co Kerry, Enda Cloake of Slaney Olympic was the winner of the Dingle Marathon in 2 hrs 35 mins 20 secs. A close second in 2:35.23 was Vivian Foley of Eagle AC. Both men are in the M50 age group. First woman was Lindsay Bruinsma in 3:18.27, with Lean Ni Chiobhan of Chiltern Harriers second in 3:24.45.

Leading home 1,210 finishers in the half marathon with a time of 79:20 was Gary Walsh of Bweeng Trail Blazers. First woman was Caroline McLoughlin of Westport Leisure in 87:42.

Finally, winning the East Galway 5km in Skehana was Conor Byrne of Galway City Harriers in 16:35. First woman in 17:47 was Edel Gaffney of Trim AC, while at the Run Fintona Run 5km in Co Tyrone, the winners were Paul Barbour in 17:41 and Joanne Campbell of Finn Valley AC in 20:50.

Here’s some we made earlier…

John Black of North Belfast Harriers won the GRC Coastal 5km, in Carnlough on Friday (September 2) with a time of 15:31. Gemma McDonald of Ballycastle Runners was first woman in 18:19.

Eoin Keating in 17 mins 32 secs, and Raheny Shamrock veteran Annette Kealy in 19:28, were the winners of the Portmarnock Beach 5km on Thursday (September 1) .

On Wednesday (August 31), the winners of the Stryker BHAA 4-Mile in Cork were Denis Hegarty of Hegarty Engineering in 20:25 and Hannah Steeds of Eli Lilly in 23.18. Host business Stryker won the Grade A team prize, with the Dept of Education best of the grade A women’s teams. Zak Hanna of Newcastle AC finished a brilliant second in the WMRA World Cup Vertical Nasego race in Brescia, Italy in a time of 34 mins 21secs.

In the U17 race, Caitlin Hughes finished tenth girl while Ryan McCarthy was 15th boy. Both were running for the Republic of Ireland. England took both U17 team titles as well as the U20 girls title. Scotland won the U20 boys title.

Keith Lane and Ellen Vitting were the winners of the Kerry Way Ultra 200km which started on Friday (September 2).
Lane, third in last year’s race, finished in a new record time of 21:18.31 with Vitting, fresh from the UTMB in the French Alps, clocking a time of 27:07.56. Second overall in 23:36.41 was Stephen Mangan.

Winners of the Ultra Nite from Waterville to Killarney were Patrick Mullane in 11 hrs 48 mins 50 secs and Megan Jungmann in 13:29.54. In the Ultra Lite 50km from Sneem to Killarney on Saturday, Martin Crowley in 5 hrs 36 mins 17 secs and Mags Dempsey in 6 hrs 23 mins 6 secs were the winners.

After taking an early lead, Sommers, a race “regular”, built up a lead of more than two minutes over the gruelling 15km course finishing in 57 mins 10 secs for a first ever victory in the race. In an event dominated by local athletes, Aidan McMoreland was second in 59:36 and Martin Brennan third in 59:55.

Olympic marathon runner Breege Connolly was eighth overall and first woman in 63 mins 59 secs, followed by previous winner Heather Foley in 66:53 and Caroline McLoughlin in 68:15. It was a third win for Connolly who ran her best time of 63:06 in 2014.

Winnera at the Larne Half marathon open race on Sunday (August 28) were Andrew Annett of Mourne Runners and Courtney Maguire of Clonmel AC.

Annett’s time of 67 mins 40 secs put him comfortably clear of Graham Gilsinan, who finished second in 69:16, and Rob Scott of Richmond and Zetland AC third in 69:40.

Maguire’s time of 73:54 was a massive PB. Mary Mulhare of Portlaoise AC was second in 77:38 and Sorcha Loughnane of Donore Harriers third and first W45 in 78:57.

Why a Derm and a Dietician Recommend Kimchi for Eczema