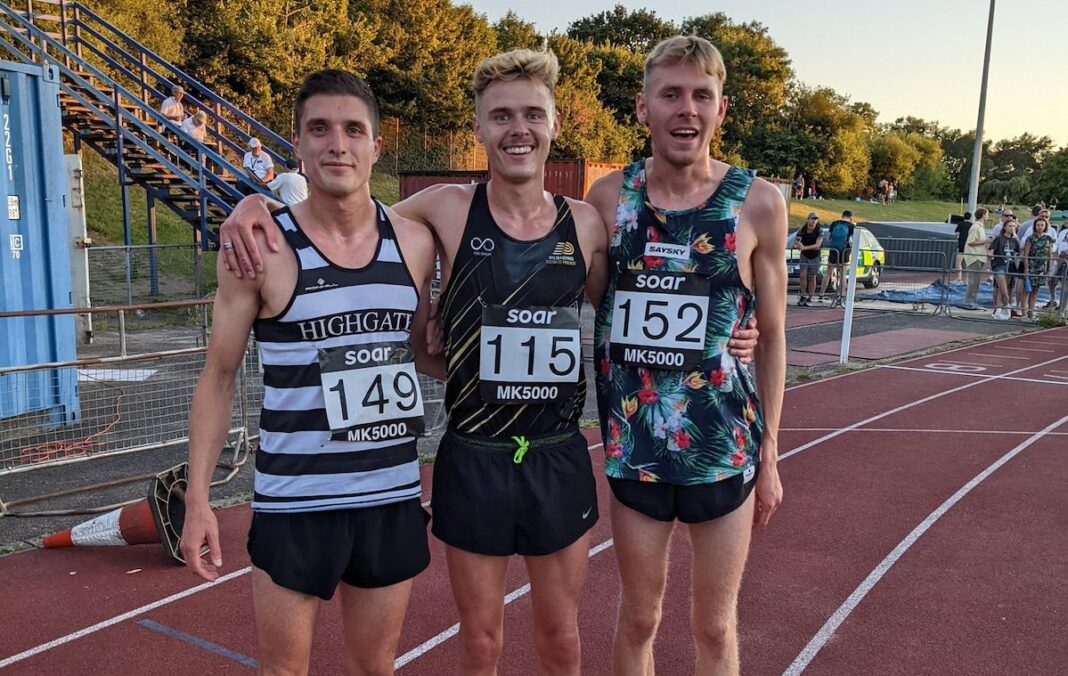 A quiet week, perhaps the calm before the World Athletics Championships storm, but there were still high quality times over 5 and 10k despite some toasty conditions towards the end of the week, as well as plenty of action in the  local leagues and open meetings

It was either cool enough by the time the A races happened at Saturday’s  SOAR MK5000 PB Special  or the athletes were metaphorically on fire themselves as nine men ran under 14 minutes. MK’s own Charlie Wheeler ran a blistering 13:38.67 for the win, a stadium record and a PB of 13:38. Cameron Allan also PB’d, running 13:42.23. Jacob Alleb rounded out a fast podium, crossing the line with 13:46.17 on the clock. Herne Hill’s Gerogue Gregc took the women’s victory in a new best of 15:51.54. After running 15.46 on the “road” at the Podium 5k last week in cold and rainy conditions, Elle Twentyman mixed it up by taking on the heat and clocking 15:58.39 on the track for second place. Jennifer Walsh was third in 15:59.70.

The Wilmslow 10k was a little slower than we are used to seeing on the results list,no doubt affected by the temperatures on Sunday. Lily Partridge is becoming a regular at the top of the podium on shorter UK races at the moment, earning this week’s top spot in 33:48 ahead of 34:30 from Eleanor Bolton and 35:13 from Kirstey Longley. Nigel Martin was first over the line overall, running 30:27 and well clear of Tommy Power who followed him home in 31:00. Nicholas Barry was third in 31:09. On the track away and at home

On Monday, George Mills was in action at the Meeting International de Sotteville where he ran 3:42.03 for 10th place over 1500m. The youngsters were in action out in Jerusalem at the European Athletics U18 Championships this week, where Annie Mann won her 1500m final in 4:23.41 and Jess Bailey was second in the 3000m in 9:32.74.

Midweek racing in Birmingham at the BMC Gold Standard Races hosted a small but perfectly formed field of four for the 5000m race. Not deterred, three ran sub-15 and three of set new bests.Ben Brown who won in 14:29.54, Lloyd Sheppard Brown took silver in 14:31.85(PB) and James Straw third in 15:54.61. An honouroable mention goes to Andrew Thomson in fourth with a new best of 15:10.45.

Local lad took the honours at Bridges of the Tyne 5. Sam Hancox won for Morpeth Harriers in 23:46, confidently holding off a race for runner up by Gateshead’s Conrad Franks (25:30) and Sunderland’s Stephen Jackson (25:31). Elwick Harriers’ Imogen Bungay won the women’s race in 30:17 ahead of Kathryn Stevenson (30:32) and Tracy Millmore (30:45). In the latest editions of the Holme Pierrepont 5 mile at Nottingham University Dan Nugent won in 27:20 and Caitlin Bradbury in 33:59.

Back to more traditional distances – Wavertree Mystery 5K had 16:20 on the clock when Jake Sache broke the tape for the win, but Anna Bracegirdle was hot on his tail, taking her victory in 16.20. Liam Brown completed the podium in 16:34. Second female was Jade Morgan in 18:02 and third, Andrea Bond in 19:35. Third male went to Joshia Makin in 16:40.

The Power of Now: Book Review and Cliff Notes