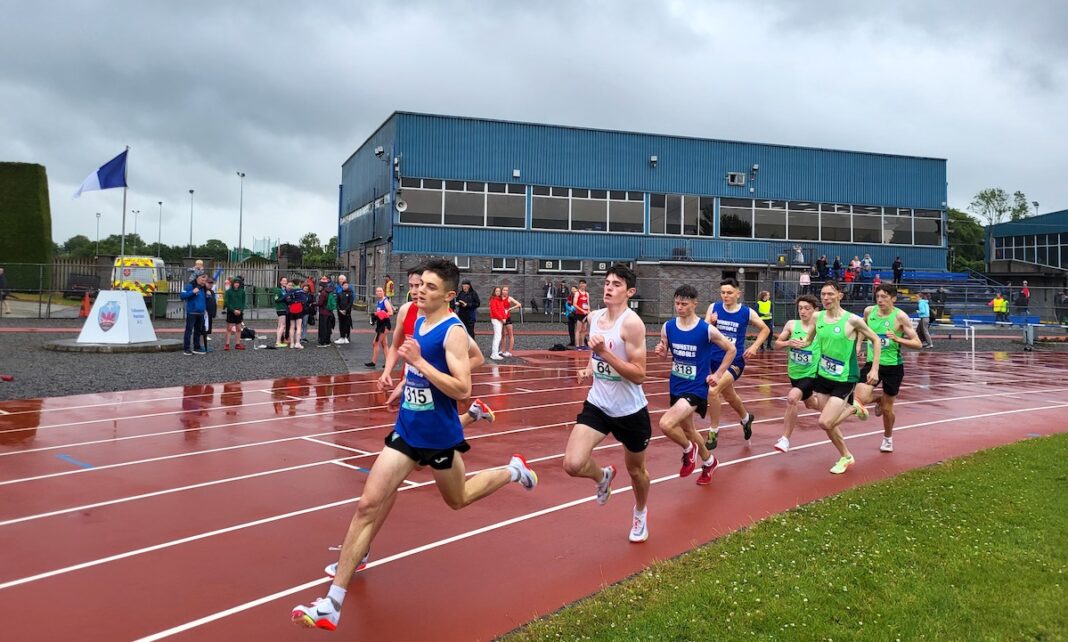 The Irish round-up is a little bit later than usual as our editor Robbie Britton was chasing, and failing to catch, aeroplane connections. Lindie Naughton reports on the action from this weekend.

An eventful men’s 1500m closed out the National Track and Field Championships at Santry on Sunday (June 26) bringing the crowd to its feet.

For the first two laps, Paul Robinson and Kevin Kelly of St Coca’s AC along with Louis O’Loughlin of Donore Harriers headed the pack, which was still intact at 800m, passing through in a pedestrian time of 2 mins 21 secs.

A final burn-up over 200m between the big names was looking inevitable — until Mitchell Byrne of Rathfarnham WSAF AC decided enough was enough, sprinting to the front and quickly building up a lead of about ten metres.

Sadly, there was to be no reward for his brave move and with 200m to go, Byrne was caught by Cathal Doyle of Clonliffe Harriers who then pulled away for a first national senior title in a time of 3:59.36.

Behind Doyle, pre-race favourite Luke McCann of UCD AC found himself passed first by Shane Bracken of Swinford AC and then by Robinson. Finishing fifth was junior sensation Nick Griggs of Mid-Ulster AC.

In an equally tactical women’s 1500m, Carla Sweeney of Rathfarnham WSAF AC took over in front at the bell and went on to win in 4:37.96, with Maisey O’Sullivan of St Abban’s AC catching Niamh Markham of Ennis TC in the battle for second place.

Louise Shanahan has been having quite the 2022! Photo: James Rhodes

Earlier, in the 800m finals, Leevale’s Louise Shanahan proved the class of a women’s race, showing her experience when she went to the front and slowed the pace before injecting her signature burst of speed in the chase for the line to win in 2:10.90.

In the men’s 800m race, Mark English of Finn Valley AC continued his decade long dominance of this distance, pulling away from the defending champion John Fitzsimons of Kildare AC for an eighth national title in 1:48.46. Mark Milner of UCD AC was third and the 2020 champion Harry Purcell of Trim AC fourth.

For a second time, victory in the men’s 5000m went to Darragh McElhinney of UCD AC, who took his first title at this distancer in 2020; he finished in 13:53.84. Defending champion Hiko Tonosa of Dundrum South Dublin AC was second and Efrem Gidey of Clonliffe Harriers, who had led at the bell, third.

A day earlier, Fionnuala McCormack of Kilcoole AC took the women’s 5000m title in a time of 16:07.75, beating the Nic Dhomhnaill sisters, Sorcha and Ide, from Donore Harriers.

In a thrilling finish to the men’s steeplechase, Jayme Rossiter of Clonliffe Harriers regained the title he had won in 2019 when he out-sprinted Sligo AC’s Finley Daly to win in 9:26.43. Just two women lined out for the women’s steeplechase on Sunday, where Leevale’s Michelle Finn nailed down her eighth national title in an untroubled time of 9:57.71.

On The Roads – Quarter Win For Ciobanu

Sergiu Ciobanu of Clonliffe Harriers continued his result streak of good runs when he won the quarter marathon event at the Viking Marathon, Half Marathon and Quarter Marathon in Waterford on Sunday (June 26). Ciobanu completed the 10.5 km distance in 34 mins 37 secs.

A clear winner of the half marathon in 70:11 was Peter Somba of Dunboyne AC. Pauline O’Callaghan was first woman in 88:39.

Clonliffe’s Tudor Moldovan was the winner of the marathon in 2:30.04, followed by Waterford AC’s Noel Murphy in 2:34.13. Martina McGrath of Kilkenny City Harriers finished third overall and first woman in 2:35.44 .Former Irish marathon champion Mary Jennings of Waterford AC was first W65 in 4:04.08. A total of 1,382 were in action between the three races.

In Co Louth, also on Saturday, Maurice McMahon of North East Runners was the winner of the Paddy Cheshire Memorial 5km in Dundalk.

Wins for Guiden and Mulhare Ian Guiden and Mary Mulhare were the winners of the annual St Coca’s 5km, held in Kilcock on Friday evening (June 24).

Guiden, of Clonliffe Harriers AC, who has notched up a series of fine runs on the roads over the past few weeks, proved the class of the men’s field finishing in 14 mins 12 secs.

For second place, Brian Conroy of Clane AC was caught with just metres to go by junior athlete Cathal O’Reilly of Kilkenny City Harriers. The pair were timed at 14:47 and 14:49. In fourth place was Alex Cunningham of Brothers Pearse AC, another promising junior athlete, who finished in 14:52.

First M40 in sixth place overall was Robert Murphy of Donore Harriers in 15:06.

In the women’s race, Mary Mulhare of Portlaoise AC was collecting her first win in a while, clocking a time of 16:37. Kate Purcell of Raheny Shamrock AC was ten seconds behind for second place, followed closely by Sheila O’Byrne of Sli Cualann AC in 16:49 and Maria McCambridge of Dundrum South Dublin AC who was first W40 in 16:56

The Offaly road running league continued with Paul Buckley of Ferbane AC first home in the Clara 5km. In a close-run race, his time of 16:28 saw him just head off the challenge of Jonathan Dunne from Tullamore Harriers who was three seconds behind in 16:31, with Michael O’Brien, also Tullamore Harriers, third in 16:35.

First woman in 17:54 was Denise Egan of Ferbane AC. Catherine Donnellan of Edenderry AC was second in 18:23, with junior athlete Heather Murphy of St Michael’s AC third in 19:17.

In the team competition, Tullamore Harriers won both men women’s titles, with Ferbane AC second, also in both categories.

Still on Friday, Sean Doyle of North Cork AC was the winner of the Shandrum 4-Mile in Newtownshandum, Co Cork, setting a new course record time of 19 mins 31 secs.

Over a minute behind for second place in 20:49 was Nick O’Donoghue of East Cork AC, while third in 21:25 was Leevale AC’s Donal Coffey.

Nadine Forde, also of Leevale AC, was first woman in 24:39, followed by Annette O’Reilly of Kilfinane AC in 25:03 and Eileen O’Keeffe of Doneraile AC in 27:21

Also in Co Cork, Fionn Harrington was the winner of the Courtmacsharry 10km in 32:14, with Hannah Steeds the first woman in 36:37.

A thrilling finish to the Docklands 5km in Dublin on Thursday (June 23) saw Rathfarnham WSAF veteran Kevin Donagher just edging it from Willowfield Harriers junior Noah Watt with only two seconds in it.

First woman and first W40 in 17:22 was Ciara Toner of City of Derry Spartans, followed by Megan Roberts of Piranha Tri Club in 18:36 and Aisling O’Connor of Rathfarnham WSAF AC in 18:38.

Raheny Shamrock took the men’s team title with Sportsworld, led by Ciara Brady, best of the women’s teams. Over a thousand finished the race, which included a corporate team category. On the same evening in Co Meath, Peter Somba of Dunboyne AC proved the class of the field in the Clonee 10km, winning in 31 mins 23 secs. Second in 34:29 was Marc Augustin of Le Cheile AC and third in 35:27 Pauric Ennis of Tullamore Harriers.

Dunboyne AC dominated the women’s race with Laura Buckley the winner in 38:16, followed by Mairead Hogan second and first W40 in 40:04 and Bonnie McFeat third in 42:06.

In Co Cork, John Meade of St Finbarr’s AC was the winner of the Cooolagown 10km in 33:14 and was also first M40. Leevale’s Donal Coakley was second in 33:18 and Kieran McKeown of Grange Fermoy AC third and second M40 in 34:40.
Eirene Eighan of St Finbarr’s AC was first woman in 40:51, followed by Linda O’Connor of Cork Tri Club who was also first W45, and Lily Murray of Bride Rovers.

Conor Gallagher of St Malachy’s AC led home over seven hundred finishers at the Lisburn Half Marathon on Wednesday (June 22). Gallagher had over two minutes to spare when winning in 69 mins 12 secs. Second in 71:34 was Christopher Madden of City of Lisburn AC while third in 72:51 was James Hamilton of Ballymena Runners.

First woman in 84:14 was Karen Alexander of Christian Runners UK. Leanne Gibson of Victoria Park and Connswater AC was second in 85:40 and Fiona McFall of Road Runners Club third in 89:44. All three women were also over 40.

In the associated 10km, Gareth Lyons of North Belfast was the winner and first M45 in 33:18; Tom Baird of City of Lisburn AC was second in 33:11 and Stephen Wylie of Annadale Striders third in 34:21.

Gemma McDonald of Ballycastle Runners was first woman in 39:08, followed closely by Martsje Hell of North Belfast Harriers in 39:13 with Elisoa [Elisoa] Crawford of Seapark AC third and first W50 in 39:27. Over nine hundred completed the race.

For the first time, the Tailteann Games for schools athletes under17 was held in Tullamore, not its usual home at Santry, and on a Friday (June 24), not the usual Saturday.

Places on the Irish schools team for the annual British and Irish International were at stake and competition was hot. In the girls’ 3000m, Annabele Morridon of Enniskillen Royal just made it to the line ahead of Claire Crowley from Kinsale CS; times were 10:05.58 and 10:06.02. Darragh Mulrooney of J &M Enniscrone had a more comfortable time of it in the boys’ race winning in 8:545.12.

No records were broken – although Sean Aigboboh of the High School Rathgar came close in the boys’ 100m, with a time of 10.71 secs. Teams from both the Republic of Ireland and Northern Ireland competed at the International U18 Mountain Running Cup, Saluzzo, Italy, where the best result came from Luke Duffy of the Republic’s team.

Best for Northern Ireland was Joshua Muckian in 40th place. The Republic’s team finished 12th with Northern Ireland 13th. Winners were Italy, with the Italian B team second and France third.

In the women’s race, Eimear McCarroll of Finn Valley AC finished 28th for Northern Ireland in 21:09. In a thrilling finish to the race, the USA’a Alyssa Sauaroa just beat Rebecca Falherty of England to take gold in 18:03. With three finishers in the top seven, England won the team title from France and Italy.