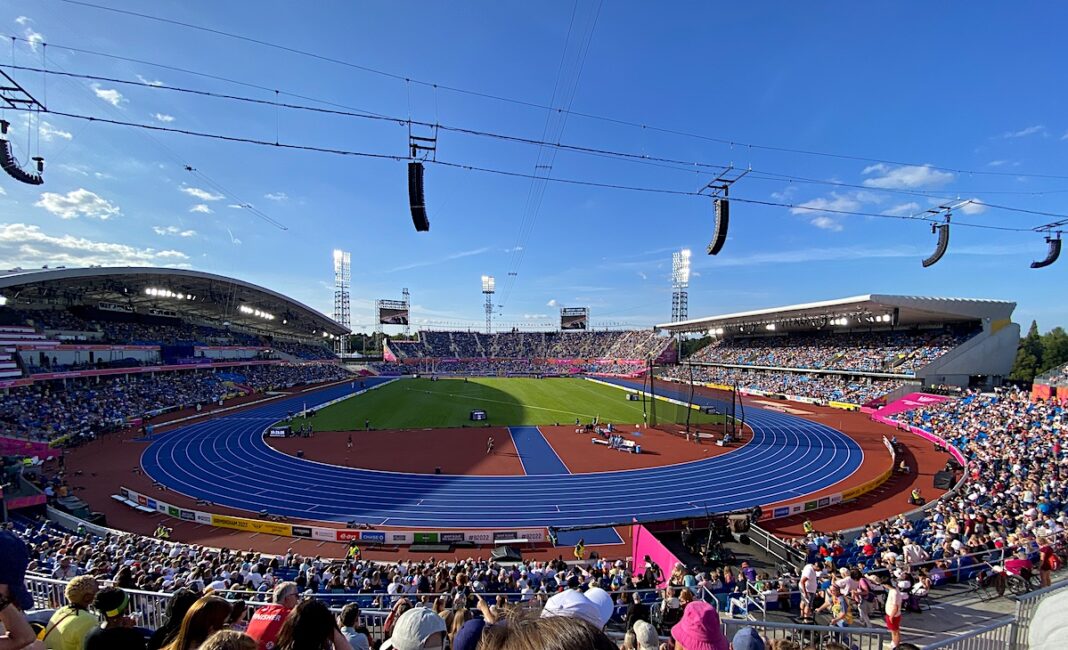 We are approaching the final couple of hours of track action at the Commonwealth Games as I write this from the Alexander Stadium, and it is fair to say that Birmingham has certainly delivered, in more ways than one. Not only has it played host to some fantastic races, but the Alexander Stadium has been blessed with fantastic crowds, an atmosphere that I feel athletics experiences only in the UK, volunteers enthusiastic without fail and, thankfully, some rather fortunate weather.

One of the highlights came early in the week with Eilish McColgan replicating the achievement of her mum Liz to win the 10,000m with a new Games Record of 30:48.60. In an astounding race McColgan put in the sprint of her life to take victory from Irine Cheptai who fought for every metre to make it one of the most exciting races in the history of the games. There were fantastic performances from Jess Judd 5th in 31:18.47, Sam Harrison setting a new PB finishing 6th in 31:21.57 and Sarah Inglis 9th in 32:04.74. Hannah Irwin suffered an injury and needed with pull off the track, the whole Fast Running team were incredibly loud to see her racing in the Games and know she will come back supercharged.

Another stand out race was the men’s 1500m which, speaking personally, was one of the most exciting races I have seen in person. Perhaps for the lack of Jakob Ingebrigtsen, it could be mistaken for a world-level final. In a thrilling home straight sprint it was Australian Ollie Hoare who took the win, just, in 3:30.12, bettering the Commonwealth Games Record set by Filbert Bayi back in 1974. In fact, the top six athletes all bettered that mark including Kenyan Timothy Cheruiyot (3:30.21) and Jake Wightman (3:30.53) who completed the podium. Jake Heyward bettered his own Welsh Record in fifth (3:31.08) with lifetime bests for Matt Stonier (3:32.50), Neil Gourley (3:32.93) and Elliot Giles (3:33.56) in seventh, eighth and ninth.

A fine silver medal was the reward for Lizzie Bird in a well-paced 3000m steeplechase that saw a blistering pace from eventual winner Jackline Chepkoech of Kenya and Olympic Champion Peruth Chemutai; the latter unfortunately fall at a barrier and Lizzie was able to overhaul her in the last laps with a PB of 9:17.79. The domestic battle between her and Aimee Pratt has allowed a real of the discipline over the past 18 months.

Mary Moraa put on a show that threw out the rulebook of race tactics in winning the 800m ahead of England’s Keely Hodgkinson and Scot Laura Muir. Elsewhere, there was a distance double for Jacob Kiplimo in the 5000m and 10000m, both with excellent last laps, whilst Abraham Kibiwott won the men’s steeplechase ahead of Indian Avinash Sable in a new National Record (8:11.20). Plenty of Other Track Too

Whilst eyes have been centred in Birmingham, there has been plenty of other domestic track action across the country. The ever-popular Hercules Wimbledon Night of 5000m Racesmade a welcome return on Wednesday night, with six graded races that saw Georgie Grgec (16:07.30) and Ned Potter (14:10.22) the speediest over twelve and a half laps. A high quality invitational 1500m was also held as part of the evening’s action and saw Tom Keen revise his PB to 3:38.92, finishing ahead of Kane Elliot (3:40.27) and Callum Elson (3:40.32 PB).

With the Commonwealth Games in full swing there was limited British representation at the  Diamond League on Saturday however, Adelle Tracey set a new 1500m PB (4:02.36) whilst Kyle Langford finished seventh in the 800m (1:46.65).

It feels a relatively quiet week for road racing, although a fair number of Sunday races have yet to publish their finalised results. The Yateley 10k attracted some top quality athletes who produced commanding wins, in the form of Steph Twell(34:45) and Joshua Grace (30:46), the latter finishing almost 90 seconds clear of the rest of the field and Twell over five minutes ahead of the second placed woman.

Stepping up in distance and there were wins for Rachel Hodgkinson (78:29) and Scott Nutter (73:06) at the Windmill Half Marathon, with the honours at the Islay Half Marathon going to Colin Whitby (74:19) and Holly Smith (1:41:48).