Winning Strategy: Aaron Donald Will Never Settle for Being Just The Best 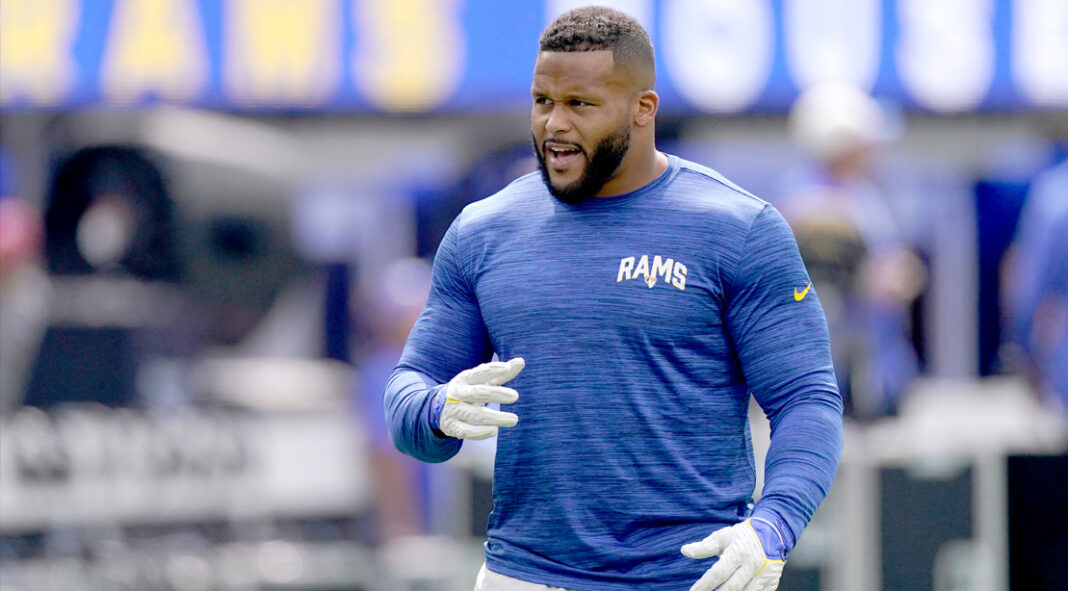 Aaron Donald entered the NFL in 2014 at age 23 and quickly established himself as a defensive juggernaut. He spent two years playing in St. Louis before heading to Los Angeles, where he’d continue to find success and collect three Defensive Player of the Year awards (2017, 2018, 2020), seven All-Pro selections, eight Pro Bowls, and a Super Bowl ring (2020).

At age 31, with eight years in the league behind him, you might wonder how much is left in Donald’s tank. Will he lose a step? Can he find ways to stay motivated?

The answers are an emphatic no and yes.

This season, Aaron Donald recorded his 100th career sack, becoming the second defensive tackle in NFL history to reach that milestone (Alan Page was the first). The only chance of the 6’1’’, 280, defensive tackle slowing down is perhaps the onslaught of double and even triple teams he gets from offenses. These challenges present new obstacles to overcome. And when you pile on the previous ones he’s logged and continues to learn from, it’s a never-ending source of inspiration to press forward.

For example, before the Rams won the Lombardi Trophy a 23-20 victory over the Bengals last year, there was a 13-3 loss to the New England Patriots in Super Bowl LII back in 2017. The sting of making it to the big dance and coming up short wasn’t lost on Donald. It just meant he had to work harder.

“Adversity can do two things to you: It can pull you down or it can pull you up,” Donald says. “Falling short in our first Super Bowl was one of the best things that happened to me—it made you appreciate getting there that much more. You expect to win, but when you fall short, you still expect to get back there easily. It took me three years to get back, and now I appreciate it more and realize that, this journey to get back to the Super Bowl, you can’t take none of this for granted.”

And if his training regimen is any indicator, the 2014 first-round pick out of Pittsburgh will be breaking those double teams with ease. He crediting his on-field success with a grueling offseason training regimen. In Donald’s world, there really are no days off. He just now works smarter, including a new appreciation toward recovery, which helped him form partnership with Dr Teal’s. He says it’s helped him stay offseason strong all season long. (“Having an opportunity to partner with something that I actually use and love have been great,” he says. “It plays a huge role in my success for recovery standpoint so I can be able to perform on Sundays.)

Super Bowl success and being out of the NFL can come down to maintaining an uncompromising regimen, as Aaron Donald says in this Winning Strategy. He also shares advice on how best to use advice from industry veterans to improve your game and how to pay it back to the next generation. This strategy, Donald hopes, will lead him and the Rams for a third Super Bowl appearance.

“Honestly, winning the Super Bowl or an accomplishment like that is the biggest motivation you can get,” he says. “I want to relive that all over again. I thought I was hungry to get a Super Bowl when that what I didn’t get one (in 2018). But when you accomplish that and get to live that moment out with your family, your friends, your teammates, I want to do everything in my power to relive that all over again. That’s what I’m chasing.”

I will never take it easy. I’m a guy who trains all year round. I tell people this all the time: When you make a name for yourself, it gets 20 times harder because now everyone’s game-planning to try and stop you. So if I would ever throttle back and relax, I can never be the player that I want and need to be to help my team win—and winning in this game is a lot more fun when you’re making plays and being a productive football player. I want to continue to be that type of player.

I know what it takes, and I’m kind of addicted to the work. I don’t want to stop—I want to keep working, putting in the extra sets, the extra running, conditioning, things like that help me feel good and look good. At the same time, it’s something mentally that I feel like I have to do. So I’m a guy who’s all year round. I don’t give myself two or three weeks off. If anything, I’ll take three days off [after the season], then I’m right back in the weightroom.

To be honest, last season was probably the best I felt my whole career. I was probably the strongest I’ve ever been from start of camp to the end of the Super Bowl. The week before the Super Bowl I was benching 455 for sets of threes—typically that’s not normal. Your body is used to being sore and achy, things like that. But I stayed strong and fresh through the whole season. So it was a great year.

But a lot of things had to be done. I trained with [Rams vice president, sports medicine and performance] Reggie Scott—he made sure I was doing everything I needed to do. I also worked with strength coach Justin Lovett, who’s a heck of a coach as far as letting me work but at the same time making sure I was working smart. I also added certain things to my regimen, like Dr Teals Epsom Salt Soaks, massage regimens, compression boots and things like that to be able to get through the season.

Winners never stop working I’ve been in this league for nine years and I’ve seen a bunch of players who didn’t have the work ethic to stay here. Honestly, you see a lot of guys who come in here with a lot of potential—you’ll see glimpses here and there of it—but they don’t work at it. They don’t put in any extra work in the film room or the weightroom.

You have to understand, and I know it’s cliché, but everyone in the NFL is good. Everyone’s there for a reason. Everybody’s big, athletic, and has good speed. So you have to do the things that make sure you’re ahead of everybody else. So you see so much potential and talent from so many different players that come into this league, but if you don’t work or put in the extra time or extra film study during the day or just take care of your body, you’ll be out of the league fast. Being in the NFL is a blessing and something you never take for granted because you can be in the league one day and out the next.

Soak in the Veteran Advice

I had some great guys tell me a lot of good things when I first got in the league. We had players like Robert Quinn, Chris Long, William Hayes, and Eugene Sims. One thing they always told me was just work. I mentioned before about coming in and seeing potential from a lot of guys. I was that guy who came in and these guys saw the potential for me. Obviously, I was blessed to have the work ethic—I got it at a young age. But one thing they told me was never be satisfied. These guys were telling me that I had a special talent—they were saying it before I even knew what it was going to be like in the league. So having veteran guys see the potential in me at a young age and also hearing it can sometimes help you escalate that much more, even if you already have the work ethic. Hearing from guys who’ve been in the league for a few years that you have the potential makes you want to work harder so you don’t let them down.

Outwork the others—but don’t outsmart yourself

I say just keep working. If you get to a certain point in the NFL—whether you get drafted or make it as a free agent—you made it there for a reason. You did what you needed to do to get to the level you’re at. And if you continue working to make the team, then you’re gonna do it.

I also tell young guys all the time: Continue doing what you got you here. Just play the game exactly the way that got you to where you are right now. I’ve seen guys make it to the NFL, and just get overwhelmed, because maybe they may see a guy who they may have been a fan with, or just getting to the NFL may mentally mess with some to the point in which you feel it’s too big. But football is football—nothing’s changed. The stage may be bigger because of the cameras and crowds, but football is football. Do what you need to do today—keep your head down and just work. You’ll be in good shape.

5 Golf Tips for Beginners To Improve Your Form