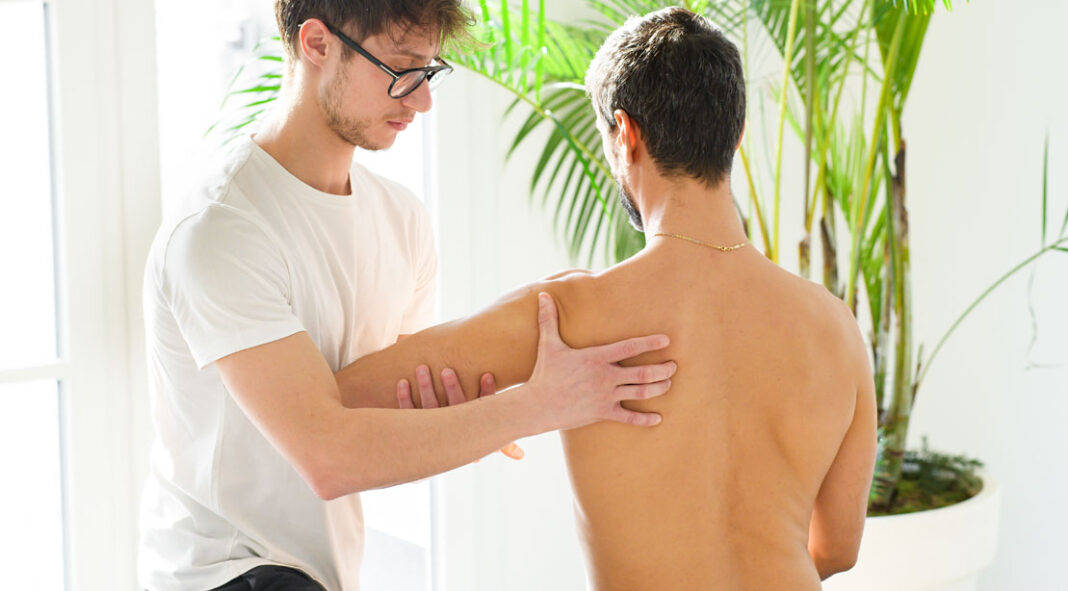 A strong and healthy back reaches beyond how much weight you can lat pull. It encompasses a solid range of motion, proper posture, identifying weaknesses or imbalances, and correcting them. Considering the back has 40 muscles both large and small starting at the top of the neck and all the way down to the tailbone; when something gets out of whack it can be hard sometimes to pinpoint the culprit. But not in the instance of suffering from a winged scapula.

A winged scapula, (although it should be treated in order to prevent further pain or even injury), is easy to identify. And with a little help from a qualified physical therapist, a protruding scapula and the affected surrounding muscles can be corrected and strengthened.

Shockingly to most, the scapula by nature is very unstable. “In fact, its only attachment to the posterior trunk is via muscular attachment, and the only joint attachment to the axial skeleton is through the clavicle,” says Cord DeMoss, physical therapist and co-owner of Vitality Therapy and Performance in Tulsa, OK.

This is an important note because the scapula is the attachment site to 17 different muscles, many of which are highly involved in dynamic stability.

“So, what we have is a relatively unstable bone that is the base of stability for a lot of movement.” Says DeMoss. It’s no wonder winged scapula is so prevalent today.

What is Winged Scapula and How to Identify It

According to DeMoss, “Winged scapula, traditionally speaking, is when the medial border of the shoulder blade sticks out, essentially coming off of the rib cage.”

Rather than lying flat, the scapula protrudes forward from your back. “In the orthopedic rehab world, this is typically classified as Scapular Dyskinesis which is a fancy way of saying that the movement of the scapula is inadequate compared to how it is designed,” DeMoss explains.

So, when one has a winged scapula, it is because the supporting musculature isn’t doing an adequate job of stabilizing the scapula. “This typically occurs when there is some sort of load on the arm such as in a push-up, overhead press, etc.,” says DeMoss. Ideally, the entire shoulder blade would sit closely to the rib cage as it moves forward and backward. “However, we get a winged scapula when the muscles, most notably the serratus anterior (also known as the Boxers’ muscle), does a poor job of holding it down,” he further explains.

This makes identifying a winged scapula fairly easy as you will notice your shoulder blade protruding forward versus lying flat on your back. Seeking out the professional opinion of a physical therapist is a great way to be one hundred percent sure your scapula is winging.

Symptoms of a Winged Scapula

It’s important to note that having a winged scapula doesn’t automatically mean you will have pain. In fact, if you walk around your gym you will start to notice just how many people have it.

“The increased prevalence is typically correlated to postural defects that pull the shoulders forward,” says DeMoss. Tightness in the anterior chain (think, chest muscles) paired with weakness in the posterior chain contributes to everything shifting forward which can result in:

Why It’s Important to Treat a Winged Scapula

Since the scapula is a relatively unstable bone that is the base of stability for a lot of movement, it’s important to develop the musculature that stabilizes our scapula. This adds more strength and stability to a not-so-stable area.

DeMoss often likens the scapula to a surfboard. “I tell my patients that unless we develop scapular stability, it is like trying to do heavy squats on a surfboard in a pool,” he says.

However, if you can develop the musculature that stabilizes our scapula, it is more similar to doing squats on the same surfboard, but with the surfboard sitting on the concrete path next to the pool. “It is going to be much easier to perform our squats, and we are going to be much more powerful when the surfboard is on the concrete,” says DeMoss. It’s a somewhat elementary metaphor, but it gets the job done.

In DeMoss’ experience as a performance therapist, even though a winged scapula doesn’t always equal shoulder pain, shoulder pain on someone who has significant winging of the scapula indicates an imbalance and even a decreased ability to fire the correct muscles.

“When this happens, the amount of free space in the glenohumeral joint (aka the shoulder joint) decreases, and this is when we get pinching pain, overuse irritation, and even the beginning stages of tearing,” DeMoss says.

He adds: “As a performance PT, my job is not necessarily to fix their winged scapula, especially winging at rest, but it is to optimize the movements they are performing on a daily basis.”

An example of this would be – In an overhead press, rather than the scapula upwardly rotating and protracting, it will stay in a downwardly rotated and internally rotated position. This causes a

decreased amount of space that the upper arm has to travel before it effectively runs into other structures causing irritation.

Case in point, the scapula area as a whole, serves best being strengthened and mobile.

How to Treat a Winged Scapula (Don’t ‘Wing it’ Yourself)

When looking to treat winged scapula, working one-on-one with a physical therapist is your best bet. Winging it yourself might cause more harm than good.

With all of that being said, the main exercises/moves DeMoss focuses on at least early on in the rehab is serratus activation using:

“These are best begun under the supervision of a PT because most athletes cannot tell if they’re firing in the right areas, but with some feedback, they can learn what it should feel like and then perform those exercises on their own.” DeMoss says.

So, although it would be nice to be able to treat a winged scapula on our own, professional guidance is the best route to healing and becoming stronger in that area until you know how to properly perform the moves and know what you’re looking for.

5 Sources of Revenue Event Organizers Can Tap Into