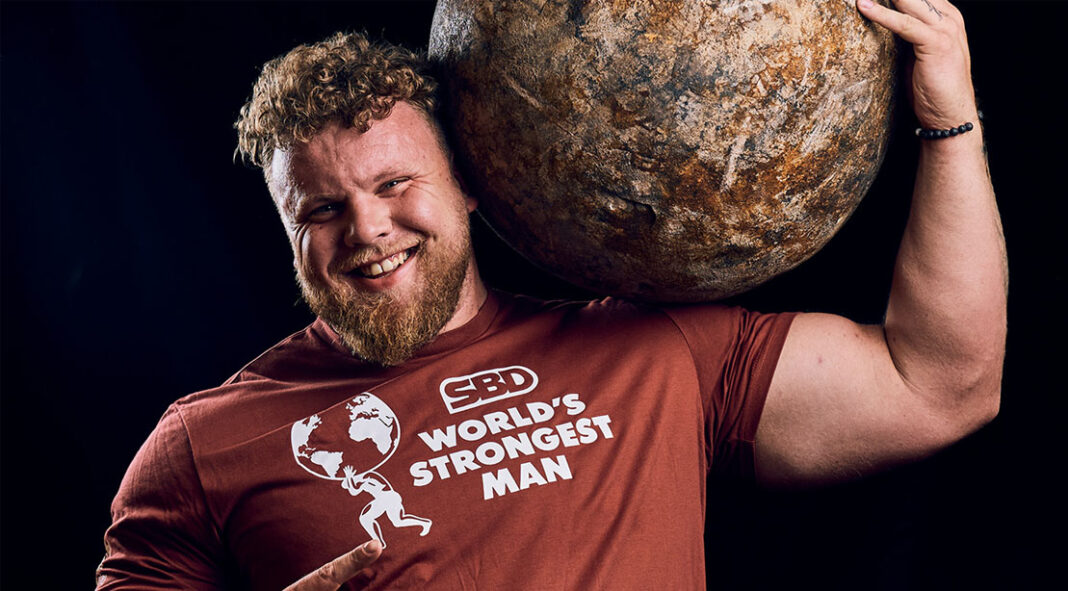 Scotland’s Tom Stoltman repeated last year’s success to be crowned World’s Strongest Man for the second year running, but while this giant certainly has the world at his feet, many will be surprised to learn that the 6-feet-8-inch, 385-pound warrior has faced mental challenges in addition to the obvious physical ones. In an exclusive interview with M&F, Stoltman bravely shares his origins in the sport, family bonds, his experiences of autism, coping strategies, and offers valuable advice for anyone that needs to hear it.

For Tom Stoltman, a keen soccer player and avid Rangers F.C. fan, the journey to strongman was a path first trailblazed by his big brother. “My first strongman memories were of Luke, and going to Scotland’s Strongest Man,” recalls Stoltman. “Seeing him win, it was like ‘wow my bother is Scotland’s Strongest Man’ so it’s pretty cool to have a brother that’s strong, you know?” As Tom began to harbor dreams of taking up the sport for himself, Luke made time for his little bro. “Back then, when I was 17, he was 27 so he was still new to the sport, but I think him taking me under his wing and helping me progress as much as I did really helped him as well, because it pushed me and it pushed him. In the first year or two in the gym, I was nearly catching up with him and I think that made him more-hungry as well. But it was good to start biting at his ankles at an early age, you know?”

Family is everything for Tom and so his competitive rivalry with Luke is a friendly one that brings out the best in the siblings that are often referred to as “the strongest brothers in the world.”

The Stoltmans give each other strength

“We’re competitive, but we want each other to do well,” shares Stoltman. “I think everyone see’s that when we are on World’s Strongest Man on TV, Giants Live, or whatever competition we do, we’re always together, always cheering each other on. Just as long as myself or Luke wins the competition, we don’t care which one of us it is. We get to travel the world together and not many brothers have experienced what we have in the last 10 years.”

Stoltman’s progression in World’s Strongest Man has been nothing short of epic. Having first qualified in 2017, he took fifth place in 2019. By 2020, Stoltman was runner-up, and if it wasn’t for a low scoring round on the Hercules Hold, he could have clinched first place. “Looking back to [2020] when I came second place, in my head, when I went away from that competition, I told myself that I was the strongest man in the world,” he says. “I only lost because of one mistake from myself, so that was kind of when the journey started. I went back to my coach and I [hired] a nutritionist.”

Stoltman also works on the mental side of competition with the appointment of a clinical psychologist. “Because that was my weakness,” says Stoltman. “Having the psychologist, for me feels like cheating, you know? I think that my mindset is most unbreakable. No one can break it.” It’s a mindset that Stoltman has evolved through understanding his childhood diagnosis of autism and figuring out how he can harness his inner dialogue to dominate the physical world.

When a school teacher told Stoltman that he would never amount to anything, it was a crushing blow that could have completely derailed the future champion, but fortunately, there was light at the end of the tunnel. Years later and far removed from the opinions of a former teacher; Stoltman says that he knew he’d become the 2021 World’s Strongest Man before he even stepped on the stage. The man-mountain has learned that autism has it’s significant challenges, but it also lends itself to many of his successes in terms of training and smashing goals.

Every night before the 2022 WSM, Tom Stoltman would write ‘World’s Strongest Man’ on a whiteboard ten times. “To win a World’s Strongest Man is about being consistent,” says Stoltman. “You have to keep going, and not give up, right to the end, because World’s Strongest Man is such a brutal event that one mistake can change the whole course of things.” The big Scot likes to follow set routines, and it causes him great emotional distress when plans are broken or schedules are changed, but autism also helps with his drive and focus when it comes to being present in every training session. “For me, I like to stay in a routine 365 days of the year,” shares Stoltman. “For me, with autism, routine is the most important thing and not having routine is really, really hard.” Following his victory at WSM 2022, Stoltman says that he is more stressed than he was during the competition, because he’s in more demand from the media than ever before, and he’s travellng to make public appearances to boot. “The advantage for myself is that I am OCD with routine, so a lot of strongmen will be like ‘ah, Ill train at 10am on Monday, and then next Monday I’ll train at 12pm’, or they will miss a meal but for me, I train at the same time every single day. I never miss a meal, and to be a professional athlete, to be the best in the world at sports [requires that].”

Stoltman is passionate about making others with autism aware that their potential should not be determined by anyone but themselves. “People with autism are scared because they might think that their friends will laugh at them [if they come out of their comfort zone]” says Stoltman. “I used to always think like that, but I got myself a few friends that I could trust, and I had my family and once I had that right circle around me that’s when I opened up about autism. If people have autism, and they are reading this, then get yourself a support system from a young age in school, trust them and open up early, then people will understand your life a bit more. If you keep it hidden, then people will always ask you questions like ‘why are you doing this? and ‘why are you doing that?’, ‘why do you put your head down?’ These questions, when you are being asked, just keep on going through your head, whereas if they understand it, they might say ‘let’s help him’. So, autism is nothing to be ashamed of, you live with it for the rest of your life, so I am trying to get autism out there as much as I can.”

At 28-years-young, many observers feel that there are many more strongman accolades to come for this hero. “I enjoyed it more this year, and the training for it,” he says. “Because I was able to involve my wife (who couldn’t be there to see him win in 2021). Sometimes you can over think things, or get a bit stressed, so to be able to have Sinead there was so much easier than in 2021. She was my chef, my PA, my stress relief, everything, you know?” laughs

the big man. Having been married to Sinead for 10 years, Stoltman’s main priority now is to take his wife on vacation. “I’ll be at World’s Strongest Man in 2023, but in between that I want to chill out and enjoy my life as much as I can. I would love to go on a cruise over the Mediterranean, something like that. Chilling out, not thinking about the world, and having a few drinks on the beach under the sun.”

World’s Strongest Man 2022 premieres on CBS on July 16. You can watch full coverage of the competition throughout the summer on CBS and CBS Sports Network.

Our Waikiki Recap (+ what to do and where to stay) –