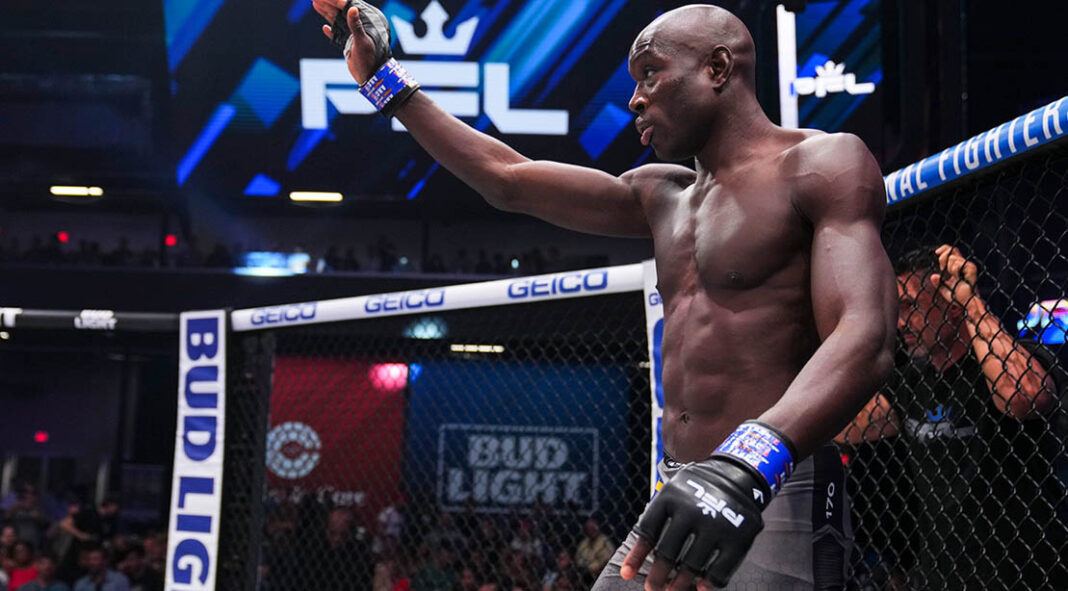 At age 35 Sadibou Sy is completely chill in Cardiff, Wales, a few days prior to fight night. This Saturday, however, all of his training, explosive power, and will-to-win shall be put to the test as he hopes to become one step closer to claiming the Professional Fighters League Welterweight Championship, and a cool $1 million as the 2022 PFL Playoffs continue this weekend from across the Atlantic.

The path to Cardiff was secured July 1 at PFL 6 when Sy defeated MMA superstar Rory MacDonald by unanimous decision. With the dust now settled on that huge win, Sy reflects that the experience has given him a lot of confidence.

“I was so happy when I got the call that [Macdonald] was going to be my second opponent because I’m not here to waste any time” says Sy, who’s nicknamed “The Swedish Denzel Washington.” “Being a legend of the sport … to be able to get the receipt on where I am, and where I am heading, was actually amazing and I feel, to be honest, that if and when I’ll fight him again, I will make it look pretty easy. Because, I’ve now felt him, and I now have a little more air under my wings in the sense that I know what I can bring, and I believe in it on a different level. I know that a fight is a fight, so you can never ever underestimate anyone, and that’s not what I am trying to say. I’m a big fan of Rory, but I just feel that I’m not a good matchup for him.”

Sadibou Sy Has a Love Affair With MMA

Sy’s love of MMA developed from his participation in kickboxing and Muay Thai. While competed for the Swedish national team he had the urge to try MMA, and began his career while staying active in those other disciplines. “But what happened was, I fell in love with it,” he says. “This was 2012 or 2013. I fell in love with it and haven’t looked back since.” With perhaps the biggest night of his MMA career now looming, Sadibou Sy understands that a well-rounded approach is necessary in order to be the very best. He appreciates the advice that he gets from his strength and conditioning coaches, such as the team at Baker Woodson Training and is laser focussed on using the right techniques at the appropriate time. “For different opponents, we’ll have different things that we are trying to aim for, and different exercises that we are putting more emphasis on,” says Sy. “A lot of it is building strength, building base, building balance, building the knowhow to transfer power, and stuff like that.”

Sadibou Sy says that an ability to adapt is the “key” to winning On his brilliant Instagram account ( https://www.instagram.com/sadibousy/ ) Sy shares many of the exercises that he undertakes in training including mobility work, CrossFit style workouts, and hardcore heavy lifting. The fierce competitor, who’s current MMA record stands at 11-6-2, has been utilizing moves such as the landmine press to continue his progression. Sy says that grueling workouts are a great way to test his ability to take punishment, and this serves him well when he finds himself under pressure during a fight. Being able to adapt for changing opponents and moments that require split second decisions is something that Sy says is “key” to any fight. “Knowing what to do and when to do it is everything because you can have all the weapons, but if you don’t know when to use them, it’s not gonna matter,” says Sy ahead of his playoff clash with Carlos Leal on Saturday. “I believe that this fight can be a very hard fight, and I believe that it can be a very easy fight. Easy in the sense that if I use the right weapons at the right time, I believe I’m gonna be able to make it not as competitive. But if I don’t (use the right weapons) then I believe he’s gonna grow, and he’s going to try and put his game plans together, and stuff like that.”

Sadibou Sy is a Self-Professed ‘Geek’ When Studying Opponents

Sy is undoubtedly a keen student of the game. Along with his team, “The Swedish Denzel Washington” breaks down every aspect of an opponent’s arsenal in order to perfect his tools for the job at hand. “I’m a geek when it comes to the technique and doing the right thing at the right time,” he enthuses. “Some fighters [take the approach of] just do more, or just do harder. I don’t believe in that concept. I believe that you have to be in great shape. I believe that you need to have the commitment, the year-long stay, and focus and everything. But I also believe that there’s the right time for the right things. It comes from having the knowledge around you but also, of course, the experiences.” Sy says that honesty is a must when reviewing his previous fights, and he’s not afraid to critique himself and figure out what can be improved before each bout. Still, one of his biggest weapons that surely gives many opponents sleepless nights is his lightning striking power. In 2019, Sy demolished David Michaud in just 17 seconds with a scintillating kick, followed by a series of brutal punches.

Coming down from middleweight, Sadibou Sy (8-4-1) crumples David Michaud in 17 seconds! The 6’3″ Swede’s six finishes are all by knockout, five in round one. #PFL1 #PFLMMApic.twitter.com/SNrE7du5je

Training To Be a Lean MMA Fighting Machine

Heading into a fight, Sy’s bodyfat percentage hovers between 7 to 12 percent, depending on how far into the camp he is. This level reaches its lowest point for the weigh-ins. “I have to be mindful about not going too low, too early, when it comes to dropping the fat,” he says. “I believe you need a little bit of fat to absorb the punches and protect the muscles.” With the UK currently experiencing a heatwave, Cardiff will be unusually warm come Saturday, but this doesn’t worry Sy, since he’s been based in Las Vegas since January and it has been so hot there that they’ve needed to have hydration packs on standby. “You need to be able to rehydrate between your practices otherwise, after one or two days you will be burned out,” says Sy. And, as bell-time draws ever closer to the PFL Playoffs, thoughts now turn to how a cool $1 million in prize money could be spent. “I want to invest,” says the smart Swede. That sounds like a sensible plan, but a huge cheesecake and sharing in the moment with his family has him just as excited.

For info on how to watch Saturday’s PFL Playoff wherever you are, click here!