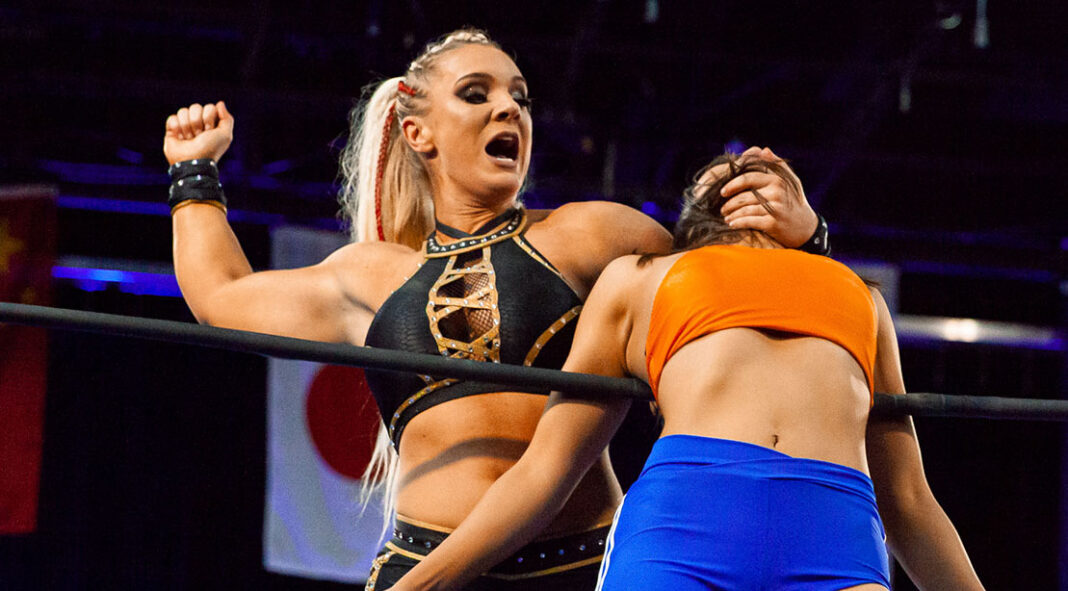 Long-time pro wrestling fans who yearn for some old school “wrasslin’” have helped the National Wrestling Alliance to re-emerge over the last few years as a fully-fledged promotion, now broadcasting weekly shows and special pay-per-view-events that are available to stream via FITE.

There’s no doubt that while WWE and AEW offer cutting-edge graphics, pyrotechnics, and lighting on their grapple-based shows, the NWA has found its niche by keeping an old-school look and feel that harks to a magical era, bringing back fond memories of Ric Flair, Dusty Rhodes, and the Von Erich’s lofty heyday.

And, if you are looking for a legitimate athlete that looks like she could kick your a**, you’ll be pleased to know that the current NWA Women’s Champion, Kamille, fits the bill perfectly. Formerly known by the longer ring name; Kamille “Brickhouse” (because she is built like one!), M&F sat down with the 28-year-old (whose real name is Kailey Farmer) to catch up on her pro wrestling career, her start in the Lingerie Football League, and her eventual dominance in the field of bodybuilding.

“I grew up playing sports”, says the 5’10” athlete from Durham, NC. “I played everything. I played soccer, and volleyball, swimming — everything. My favorite sport was actually volleyball, but I wasn’t tall enough to go to a Division 1 college for volleyball, so I ended up getting a full-ride mixed with academics, for softball. So that’s why I chose softball to play at college.”

Kamille Is Married to Her Art

There’s little distinction between home and the “office” for Kamille, since her partner is fellow professional wrestler, Thomas Latimer. The two were married earlier this month in Durham and spent a fabulous honeymoon in the Dominican Republic, but with downtime now a distant memory, the NWA Women’s Champion is focussed on defending her title against KiLynn King at NWA’s “Alwayz Ready” on June 11. “I’m a very ‘enjoy the moment’ type of person,” says Kamille. “At the wedding I ate, and then on the honeymoon I ate and drank there, so now it’s like, ok, I have a week to get sorted for the pay-per-view!”

Her love of pro wrestling began in the late ’90s when she would watch the likes of Lita, Edge and Brock Lesnar during WWE’s “Attitude Era” with her dad, but she drifted away from it in high school, and until after she’d earned her degree. Shortly after leaving college, Kamille went to a small independent wrestling show with her dad once again, and she figured that wrestling could be in her future. “The next morning, I kind of woke up and had this epiphany,” she says. “I grew up playing sports and I did a little acting when I was younger too, so [wrestling] is a mix of both. I can totally do this!”

Kamille enrolled in the Team 3D Wrestling Academy in Kissimmee, FL, a school run by former WWE Tag-team Champions, The Dudley Boyz. “You weren’t allowed to get in the ring until you proved yourself fitness wise outside of the ring,” she recalls. Dan Carr, the creator of the hit TV show “American Gladiators” also worked at the school and would put Kamille through grueling warmup drills, serving as a great mentor for her burgeoning wrestling career.

As dreams of becoming a wrestler began to come together, Kamille felt that playing the character of a smash-mouth football player who also broke bones in the ring would be a great concept, so when she heard about the Lingerie Football League, Kamille aced a tryout and began making a 12-hour round trip from Florida in order to play as a linebacker for the Atlanta Steam. The girls may have been scantily clad, but the Lingerie Football League was certainly no pillow fight.

“We wear kind of like these pads, but they were really just for show, like kids pads, and then the helmet is like a visor and nothing to protect your face really at all. So, I remember like the first play of the first game a girl from Pittsburgh came in and just hit me in my jaw and I thought I broke my jaw,” recalls Kamille. While the LFL offered little in the way of pay, the future champ was able to get her season as a football player and had certainly proved that she could be a force to be reckoned with in the ring.

During her time in Florida, Kamille had also started to think seriously about taking to the stage as a bodybuilding competitor, but had made a couple of false-starts with her prep, as life took over and derailed her progress. Still, in the years that followed, Kamille never gave up the desire to compete. “It was my third time trying, during the Covid pandemic, we weren’t wrestling… and I was like, I need something or I’m just going to become a fat couch potato,” laughs Kamille. “I need a goal. I was like, this is the time, no excuses, life can’t get in the way now because you are not doing anything. Everything just fell into place, it was perfect.” Kailey “Kamille” Farmer came first in the NPC Daytona Beach Classic bodybuilding contest on Sept. 26, 2020. “I won overall on my first ever show,” she beams.

As a long-time athlete, Kamille had to learn the differences between exercising for function, and hitting the gym to build her body. “I call it lifting for aesthetics,” she laughs. “In college, you lift functionally because no one cares how you look as long as you can hit a home run.” Kamille also dabbled in strongman, once again winning in her first competition held at a local gym. “We did stuff life throwing kegs behind our heads and lifting ATV’s, it was so much fun.”

There’s no doubt that when NWA owner Billy Corgan (yes, he of Smashing Pumpkins fame) signed Kamille as the first female wrestler on his roster in 2021, he scored one of wrestling’s next big things. She won the women’s championship that same year, and fans are already booking their own fantasy dream matches for her. “I think about it not so much as who I want to wrestle, but what would sell out an arena,” she says. “One would be Rhea Ripley in WWE just because we have a similar body build. She is a rough and tough kind of girl, and I think that people would want to see that match, and then the second one is Jade Cargill in AEW, same thing, she has a great look and I think a lot of people would pay money to see that match”

But for now, Kamille is loving her place in the ever-growing NWA locker room and is intent on having a dominating title reign for some time to come as she prepares for Alwayz Ready. “At NWA, there really is a family feel,” she shares. “Billy Corgan, the super rockstar is my boss, yet I can sit there and talk to him and have a conversation with him which is really nice.” However, when the bell rings on June 11, the smiles will disappear and those niceties will be replaced with total distain for her challenger. “I’m a one-time champion, I’m not losing that thing.”

Is Event Planner Certification Worth the Investment?

A Beginners Guide to Home Composting