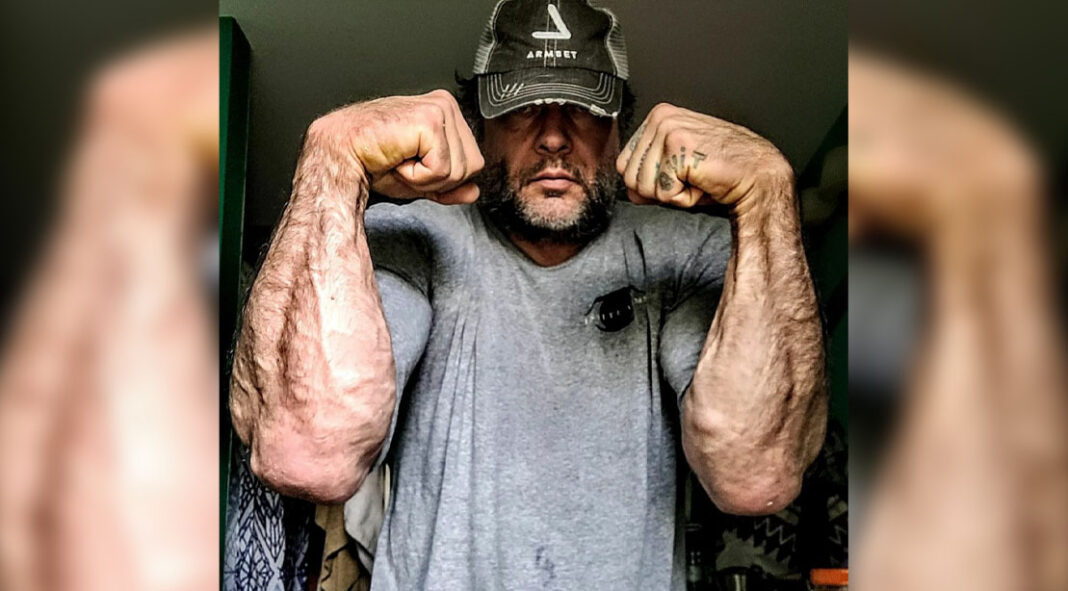 Devon Larratt is considered the most famous arm wrestler in the world. The 6’5” 283-pound Canadian is a multiple-time WAL (World Arm Wrestling League) heavyweight champion using both his right and left hand and holds an impressive reputation of beating men bigger than himself at the table such as World’s Strongest Man Hafþór Júlíus Björnsson “the Mountain” amongt others.

Larratt’s love for arm wrestling began at the young age of 5, thanks to his grandmother, who got him started in a sport that would forever be a part of his life.

“I’ve been involved in multiple arm wrestling clubs, toured all around the world, and have pulled in basically every single league that there is.” Says Larratt. “I’ve been a student and a fan of the sport as much as I am a competitor.”

When Devon Larratt was around 18 years old, he met a professional who introduced him to the real arm wrestling scene, and he was hooked. “I fell in love with it and I never really have turned back,” says Larratt. “I’ve never taken my eye off it since then, and I’m 47 now so it’s been a good solid 30 years of competitive level arm wrestling.”

There Are No Limits

Larratt’s astounding stamina, strength, and no limits mindset have proven a recipe for success in his arm wrestling career helping him defeat Michael “the monster” Todd at King of the Table 1 to pulling the greatest of all time John Brzenk in King of the Table 2.

But he won’t stop there. Larrett is now slated to take on seven-time World Arm Wrestling champion, six time European champion, and the World Cup 2017 winner Levan Saginashvili. At 415-pounds, the “Georgian Hulk” is considered a force to be reckoned with in the art of pulling — Saginashvili’s freakishly intense strength speaks for itself.

So on June 25 the two strongest arm wrestlers of this generation go hand-to-hand as the main event of King of the Table 4, live on Core Sports. It’s already considered the most anticipated arm wrestling match of all time. And while Larrett is somewhat considered the underdog, for this match, he’s coming in stronger than ever.

One look at Larratt’s physique and you’ll probably wonder how much he can curl. Although his arms are massive, training for a one rep max and pushing to failure, for the arm grappler is a thing of the past.

“I rarely ever test my one rep max because I do not believe in failure.” Says Larratt. “I think that it’s a really bad idea to fail in training and very counterproductive,” he says. Rarely going anywhere near his maximum, Devon Larratt finds he benefits much more from consistency and good volume. Not to mention, trying to remain injury-free.

“When you are doing maximum lifts and maximum attempts, it’s just a matter of time before you get injured,” he says. “You can’t really train like that and not eventually get hurt.” Max efforts, he says, are saved for the competition.

And after suffering arm wrestling injuries that resulted in three surgeries, (one surgery yielded one cup of bone spurs and calcification that was scoped out of his right elbow), it’s safe to say Larratt now trains smarter when it comes to working on specific strength.

So, what does Larratt’s training look like? Lots of arm wrestling, focusing on the movements that are important for the arm wrestling table, and performing arm wrestling movements with weights or elastic bands. “If you train the motions you will get stronger at them for sure,” he says.

“There’s a lot of connective tissue strain in the sport of arm wrestling; it’s very hard on your tendons and ligaments, and the volume and the work that I do has kind of a healing effect on those connective structures,” he adds.

“I don’t think I’ve ever been this strong in my entire life for right-handed arm wrestling,” says No Limits. Music to the ears of his legions of fans. And although he knows he’s not favored to win, he always believes he can.

“Even when I know that the odds are against me, I always believe that there’s a chance that I can do it, and I think I do see myself winning,” he says.

The one thing that Devon Larratt seems to have over his peers in arm wrestling is stamina and Larratt agrees. “Whether it’s stamina just in a physical sense, or stamina from a more technical and efficiency standpoint, I tend to outlast my opponents — it’s a huge part of why I win and It’s a huge part of my strategy,” he explains.

So, when it comes to battling the Georgian hulk, Larratt is looking to his stamina to help outlast him.

Larratt continues, “My opponent is unquestionably recognized as the number one arm wrestler on the planet and potentially the strongest arm wrestler that’s ever lived so, if I can somehow find ways to stop him and slow him down and extend the match and make it about stamina, that’s, that’s my path to victory.”

Fitness FYI: Check Out 3 New Lifting Records That You May Have Missed