Connection at Meetings and Events a Focus of Skift Global Forum 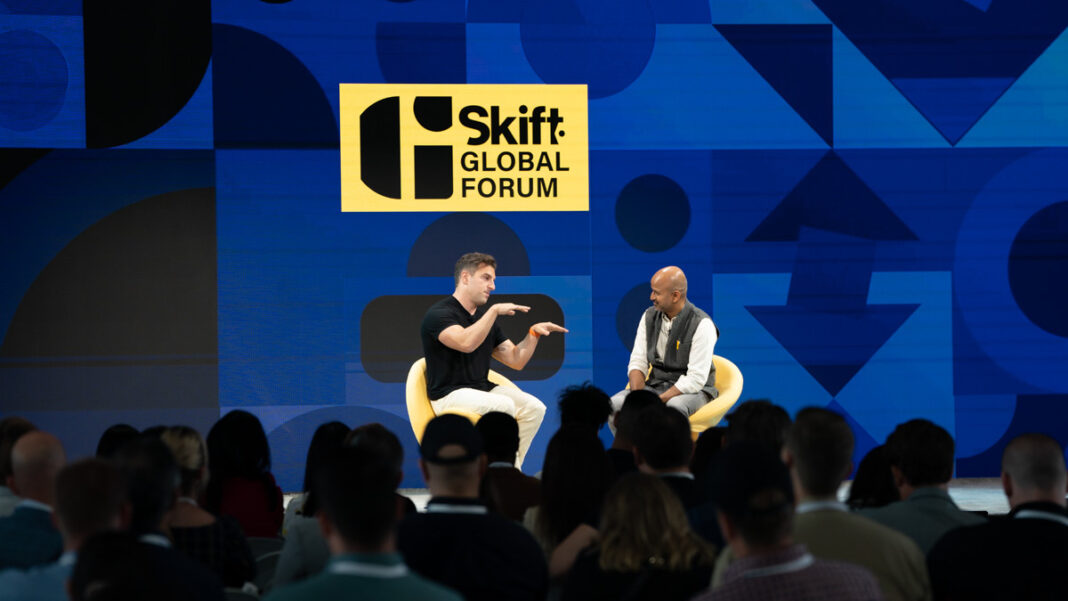 According to industry experts featured at Skift Global Forum, groups will meet in more second and third-tier cities with the main goal being to connect.

“A golden age of travel” is what awaits us which will be a boon for meetings and events. This is what Brian Chesky, Airbnb CEO and co-founder, predicted during the last session of the information-packed, two-day Skift Global Forum in New York City in which he was in discussion with Skift founder and CEO Rafat Ali. Chesky also predicts that cities will not regain the popularity they had pre-pandemic. “A city used to be the place to be. Now the place to be is the Internet,” said Chesky.

Las Vegas, Rome, and Paris will be replaced by some of the 100,000 cities and markets Airbnbs are located in. This is also good news for groups wanting to gather in a home environment but may have a smaller budget. Second- and third-tier cities offer tremendous cost savings.

We are living in a dystopian way as people are glued to their screens. “People need connection more than ever,” he said. This is good news for meetings and events that will focus less on getting business done and more on connection.

Financial technology products (fintech) were also a focus of the second day of the Skift Global Forum. Frederic Lalonde, the CEO and founder of online travel agency Hopper attributes much of his company’s success to such products like the one that lets customers pay a fee to leave a hotel for any reason. In addition, the company is working on a group travel product that we will be reporting on in the coming weeks.

Lalonde said the company generates nearly 40 percent of its $1.3 billion annual revenue from fintech products. Almost half of that figure comes from flight revenue as Hopper is the third largest online agency in the U.S. behind Expedia Group and CheapOAir.

Peter Kern, vice chairman and CEO of Expedia Group, was featured in another session and responded to Barry Diller’s comments from the day before in which he called working from home a “crock.” “There is clear evidence it can work, but we have to make it work. If it can’t make it work, Barry is right; we should all be back in the office,” said Kern.

Diller’s frustration is fueled by the reluctance of Expedia employees to return to work full-time as waiting for them is a new $900 million headquarters. “Sitting at a laptop computer on a dining room table is kind of stupid,” Diller said.

One of the most emotional sessions of the day focused on Ukraine. Mariana Oleskiv, chairperson of the State Agency for Tourism Development of Ukraine addressed the group saying, “Russia is fighting for the past. Ukraine is fighting for the future.” Her plea to the travel executives in the room was for help to rebuild Ukraine as a tourism destination.

It’s duality, like fighting for the past or future, that is the focus of Indonesia-based Potatoe Head, a lifestyle brand with locations in Singapore, Hong Kong, and other areas. A focus of Potato Head’s brand is just that, which is vital in the culture of Bali. “Everything has to be a balance,” he said. Another tenant of the company is producing zero waste as he sat next to a hotel chair he had designed made from ocean plastics.

Skift Meetings will be digging in many of the topics featured at the conference deeper in the coming weeks.

Rachael Lorenzo on the Need for ‘Indigenous Women Rising’