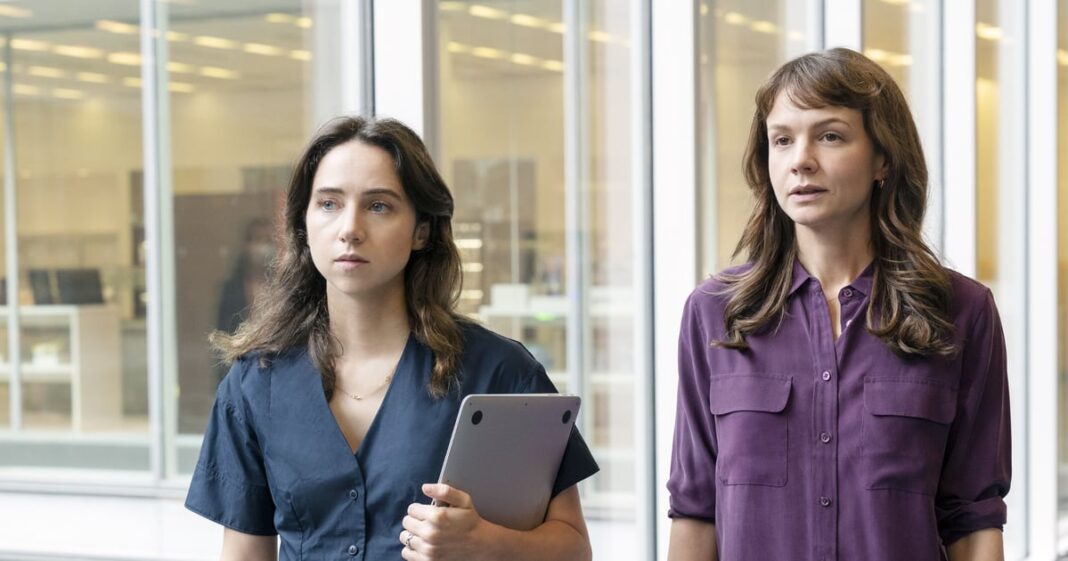 The new movie “She Said” chronicles the investigation by New York Times reporters Jodi Kantor (played by Zoe Kazan) and Megan Twohey (played by Carey Mulligan) into sexual harassment and assault allegations against former Hollywood producer Harvey Weinstein. The article they eventually published on Oct. 5, 2017, was groundbreaking, and their reporting (along with New Yorker journalist Ronan Farrow’s) eventually led to dozens of women coming out with allegations about Weinstein. It also helped spark the #MeToo movement.

The story central to “She Said” involves a lot of famous people, but the movie takes a mixed approach in how it portrays them on film. On screen, the writers talk to Gwyneth Paltrow (just like they did in real life), but the movie doesn’t show their conversation, just that they went to her house. Meanwhile, Ashley Judd, who went on the record in Twohey and Kantor’s first story, plays herself in the film in multiple scenes. The voices of Weinstein, Donald Trump, and Rose McGowan are all also heard in the film. Ahead, we’re breaking down who did the voices — and also the one time the movie uses authentic audio.

Donald Trump’s Voice in “She Said”

At the start of the movie, Twohey is investigating sexual-harassment allegations against President Donald Trump in October 2016. While at home, she gets a phone call straight from the president himself. It sounds just like Trump, but that’s because they hired an expert to mimic his voice. James Austin Johnson, who is a “Saturday Night Live” cast member and impersonates him on the show, voices Trump in “She Said.”

Rose McGowan’s Voice in “She Said”

In the early stages of the investigation in the film, Kantor tries repeatedly to reach McGowan. Eventually, the actor calls her back, and they have a heated phone call about the Times’s past coverage of McGowan. Kelly McQuail voices McGowan in the phone call during the film.

McGowan’s settlement with Weinstein was reported in Twohey and Kantor’s original story, but the actor didn’t speak on the record with the Times. She eventually spoke out about Weinstein and alleged he raped her in tweets she wrote in 2017. She also wrote about the experience in her 2018 memoir “Brave.”

Is Harvey Weinstein’s Real Voice Used in “She Said”?

“She Said”‘s approach to its portrayal of Weinstein is actually a little complicated. For most of the movie, Weinstein is portrayed by actor Mike Houston. He does both the voice work heard in telephone calls and briefly appears as the producer in a New York Times conference room, though he has no lines in the scene and is only seen from the side and behind.

But there is one point in the movie in which Weinstein’s real voice is used. In 2015, model Ambra Battilana Gutierrez accused Weinstein of groping her. She went directly to New York police, who came up with a plan for her to meet him the next day while wearing a wire to try to get an incriminating statement. Though Kantor and Twohey knew about her case, they were not able to get their hands on the recording. However, New Yorker reporter Ronan Farrow did, and he published the tape as part of his Weinstein investigation (which was published on Oct. 10, 2017). According to “She Said”‘s end credits, the movie uses the actual recording of the encounter that Farrow originally published.

The Rudest Celebs In Hollywood, According To Other Stars