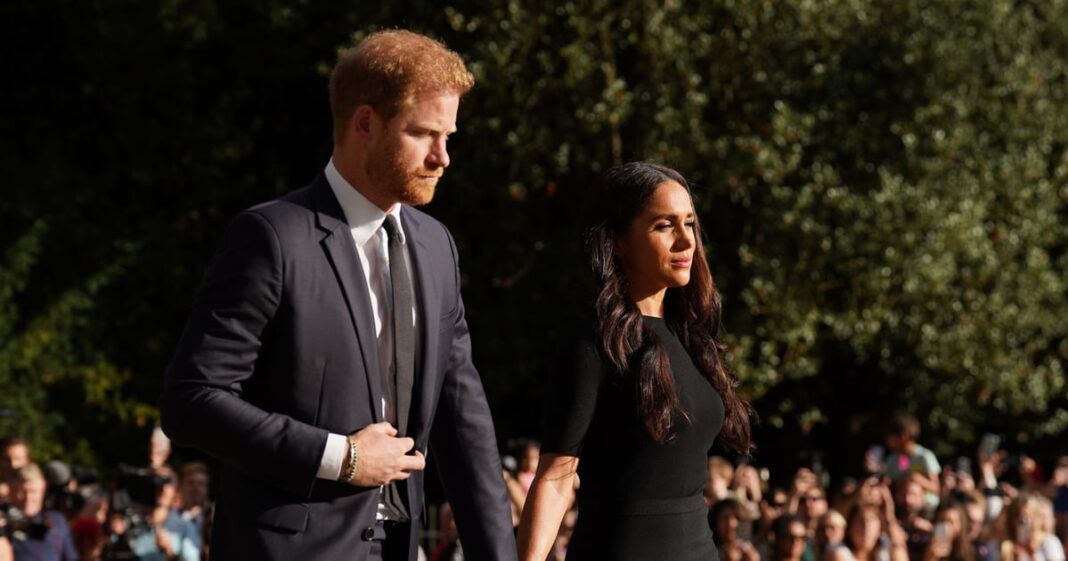 The royal family is paying tribute to Queen Elizabeth II in the wake of her death. On Monday, Sept. 12, Prince Harry became the latest royal to release a touching tribute to his “Granny” and is “forever grateful” for her years of dedication.

The statement was published on the Archewell website, the organisation founded by Prince Harry and his wife, Meghan Markle. “We are all reminded of the guiding compass she was to so many in her commitment to service and duty. She was globally admired and respected. Her unwavering grace and dignity remained true throughout her life and now her everlasting legacy,” he wrote. The Duke of Sussex, went on to reference the personal moments shared with his grandmother and his family: “from my earliest childhood memories with you, to meeting you for the first time as my Commander-in-Chief, to the first moment you met my darling wife and hugged your beloved great-grandchildren.”

Prince Harry details that he will “honour” his father, King Charles III, and finished his emotional tribute with gratitude. “Thank you for your commitment to service. Thank you for your sound advice. Thank you for your infectious smile. We, too, smile knowing that you and grandpa are reunited now, and both together in peace.” Prince Harry and Meghan Markle joined Prince William and Kate Middleton, Princess of Wales, on a walk around the grounds of Windsor Castle to speak with mourners and view tributes to the Queen on Saturday. In video shared by The Sun, Harry can be seen speaking with the people who came to pay their respects to his grandmother. In the video, he said that Windsor is “a lonely place” without the Queen.

Prince Harry and Meghan Markle joined Prince William and Kate Middleton, Princess of Wales, on a walk around the grounds of Windsor Castle to speak with mourners and view tributes to the queen on Saturday. In video shared by The Sun, Harry can be seen speaking with the people who came to pay their respects to his grandmother. In the video, he said that Windsor is “a lonely place” without the queen.

Also on Saturday, the Prince of Wales issued a moving statement about the impact the queen had not only on her country, but on his life. “I knew this day would come, but it will be some time before the reality of life without Grannie will truly feel real,” he wrote in part in a message posted across the official Prince and Princess of Wales’s social media accounts.

The new king — the queen’s eldest son — took the lead in paying tribute to the queen. On Sept. 8, Buckingham Palace confirmed via a statement on its website that “the queen died peacefully at Balmoral” just a few short hours after reports noted her family rushed to be by her side. The queen’s death followed worries about her health, which were announced in a separate, earlier statement from the palace that said “the queen’s doctors were concerned” for her.

Shortly after the queen’s death, her son, Charles, who has now acceded the throne as King Charles III, issued a statement via the Royal Family’s Instagram to pay tribute to the late monarch. “The death of my beloved Mother, Her Majesty The Queen, is a moment of the greatest sadness for me and all members of my family,” it read. “We mourn profoundly the passing of a cherished Sovereign and a much-loved Mother. I know her loss will be deeply felt throughout the country, the Realms and the Commonwealth, and by countless people around the world.”

The following day, Sept. 9, Charles gave a televised address to UK citizens — his first as King — speaking not only of his mother’s legacy, but also about the future of the country. He then attended a service of thanksgiving for Queen Elizabeth II at London’s St. Paul’s Cathedral. During his speech, King Charles spoke about his mother’s “profound personal commitment” to her country, highlighting her “sacrifices” and “devotion.” He concluded his message, “Darling mama, as you begin your last great journey, to join my dear late papa, I want simply to say this: Thank you, thank you for your love and devotion to our family and to the family of nations you have served so diligently all of these years. May flights of angels sing thee to thy rest.”

During her 70-years-long rule, Britain’s longest-reigning monarch achieved many milestones. Her legacy began when she was appointed to the throne in 1952 at 25 years old following the death of her father, King George VI. In her day, the queen was head of the Commonwealth, which currently includes over 50 countries, and celebrated her achievements with her Silver, Golden, Diamond, Sapphire, and Platinum Jubilees.

Tributes for the queen have poured in from Britain and celebrities all over. Read ahead to see how the royal family is mourning their loss.

How To Read a Sunscreen Bottle, According to Derms