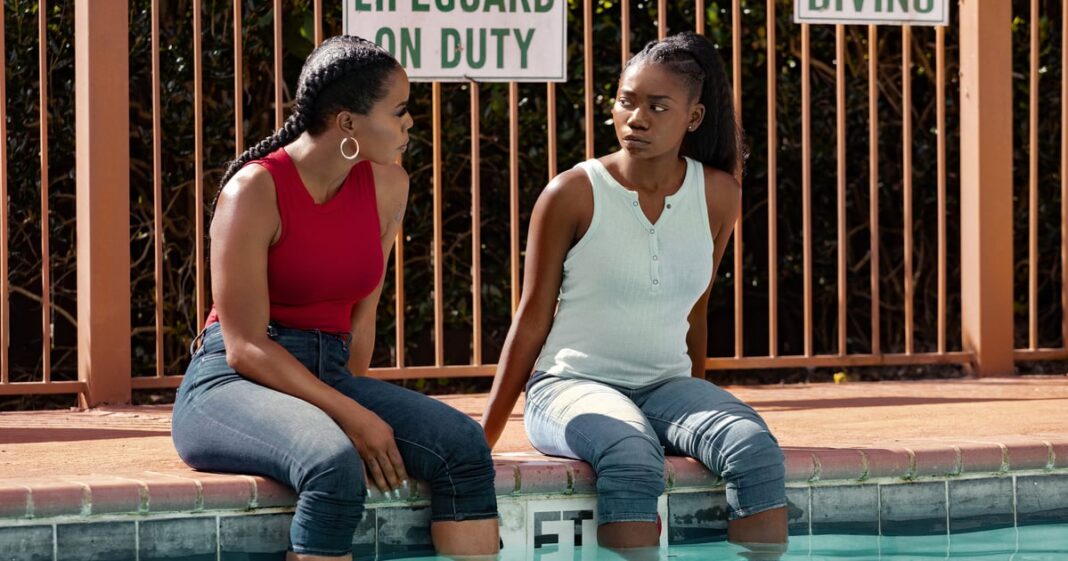 Editor’s Note: We at POPSUGAR recognize that people of many genders and identities are affected by abortion access, not just those who are women. For this story, the interview subjects generally referred to people who may seek abortions as women.

“P-Valley” season two is proving there are critical stories to be told both inside and outside of The Pynk. This week, amid a trip to Jackson, MS, the show breaks down a new wall in Mercedes (Brandee Evans) and Terricka’s (A’zaria Carter) mother-daughter relationship after the latter finds herself grappling with an unplanned pregnancy. The show ventures into new territory with an episode that fearlessly explores reproductive rights, accessible healthcare, and a person’s right to have agency over their own body.

“It was an opportune moment to really lay out specifically what a woman, a young woman, has to go through when this decision is put into her hands.”

According to creator Katori Hall, the pregnancy storyline in “P-Valley”‘s seventh episode, titled “Jackson,” has been something the show wanted to explore since the very beginning. “I had actually always wanted to write an episode that focused on a woman’s right to choose in Mississippi from the inception of the series. We just weren’t given that opportunity in season one,” she tells POPSUGAR. “So going into season two — the fact that Mercedes was a young teenage mother who was forced to give up her child to the father, due to her mother’s pressure, and to see her own daughter being put in that position where she, as a 14-year-old, would be dealing with teenage pregnancy — I just felt like it was a necessary story. I also feel as though there aren’t that many stories told about the Black female experience in regards to reproductive rights. [So] it was an opportune moment to really lay out specifically what a woman, a young woman, has to go through when this decision is put into her hands.”

Evans says she cried when she first read the script for the “overwhelming” episode — it’s her favorite of the season. Partially, she says, because it shows a new side to her character: a mother grappling with parenthood who hopes to break a generational cycle. “I was very excited that Mercedes was out of the club and having this moment with her daughter,” Evans says. “I really wanted the world to see that, because I’ve even had questions about that as the actor. Like, what happened to her when she was younger? What caused this and that? I think Katori answered a lot of those questions in this episode.” 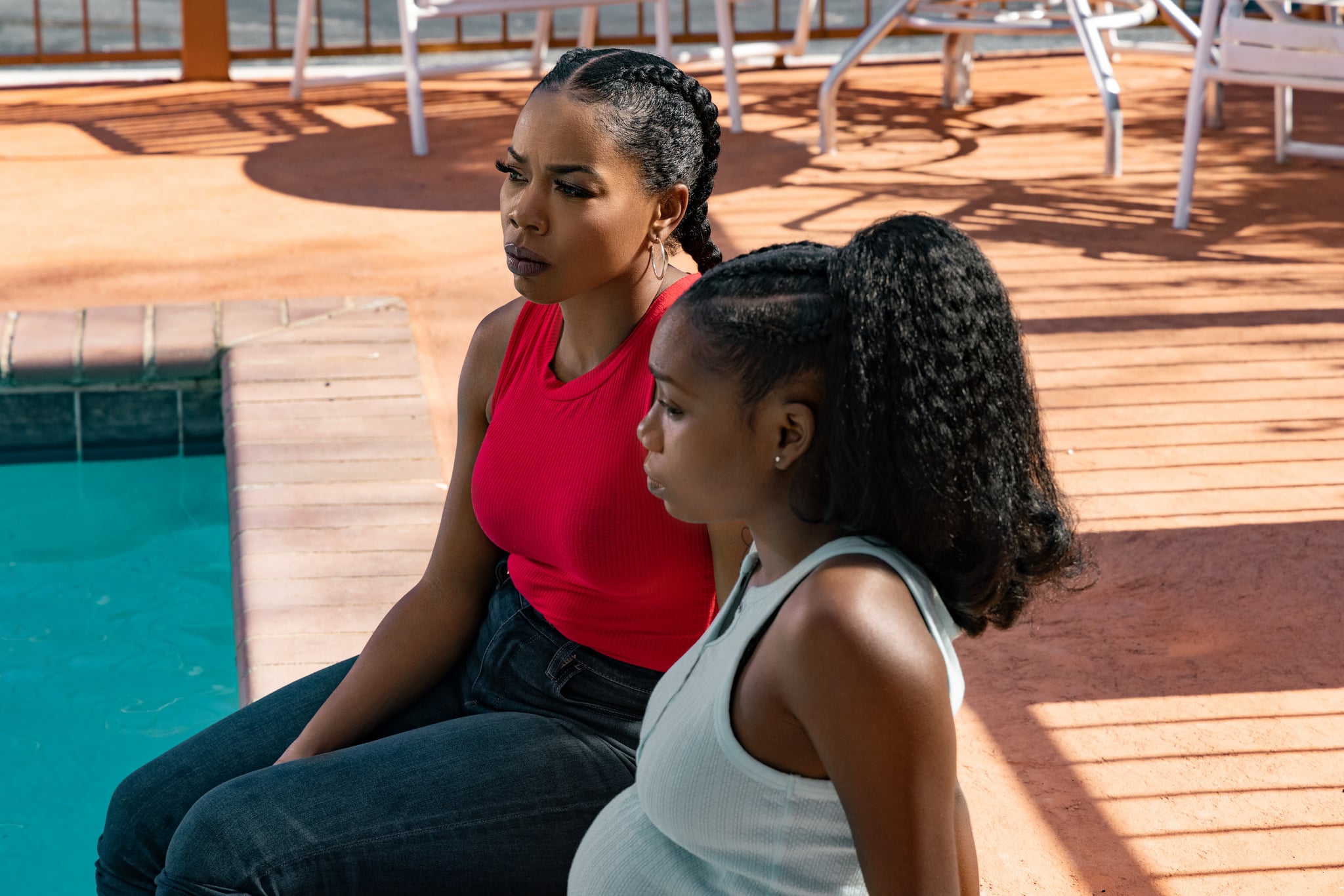 “P-Valley”‘s “Jackson” episode was written and filmed after season one aired in summer 2020 but long before the ruling to overturn Roe v. Wade shocked most of America last month. The Supreme Court case that led to the overturn — now affecting legal abortion access in the country — is Dobbs v. Jackson Women’s Health, the latter being the same organization at the heart of this episode of “P-Valley.” The abortion clinic has since been sold and will not reopen its doors even if a state court allows it to do so, the Associated Press reported on July 18. Sadly, it was Mississippi’s last remaining facility. This polarizing moment in American history makes Hall’s exploration of reproductive rights in a state banning most legal abortions take on a whole new meaning, both on screen and off.

“. . . it’s so important that we filtered this very emotionally complicated issue through one of our beloved characters.”

“I did not foresee writing this episode that by the time it aired, Roe v. Wade would be overturned,” Hall says. “I did not foresee that the only abortion clinic in all of Mississippi — the Jackson Women’s Health Organization, aka the Pink House — would be shut down in the wake of that overturning. It wasn’t even an inkling. There is a war, a metaphorical war, and quite frankly, a literal war, that’s been waged on Black women’s bodies.”

She continues, “The fact that so many of the women who went through those doors were young, Black — them being the ones who are going to be disproportionately impacted by this ruling, not only in Mississippi, but all across this nation — it’s so important that we filtered this very emotionally complicated issue through one of our beloved characters.”

Though “P-Valley” is set in the fictional town of Chucalissa, MS, the series borrows a lot of inspiration from real-life figures, events, and landmarks in the Southern state. Which is why naming this latest episode after the capital city was so crucial to Mercedes and Terricka’s emotional storyline. “Chucalissa, MS, is like an hour-and-a-half north of Jackson,” Hall adds. “So, everyone knows that if you’re pregnant and you’re going down to Jackson, it’s this kind of coated language of, ‘Oh, you’re about to go get an abortion.'” 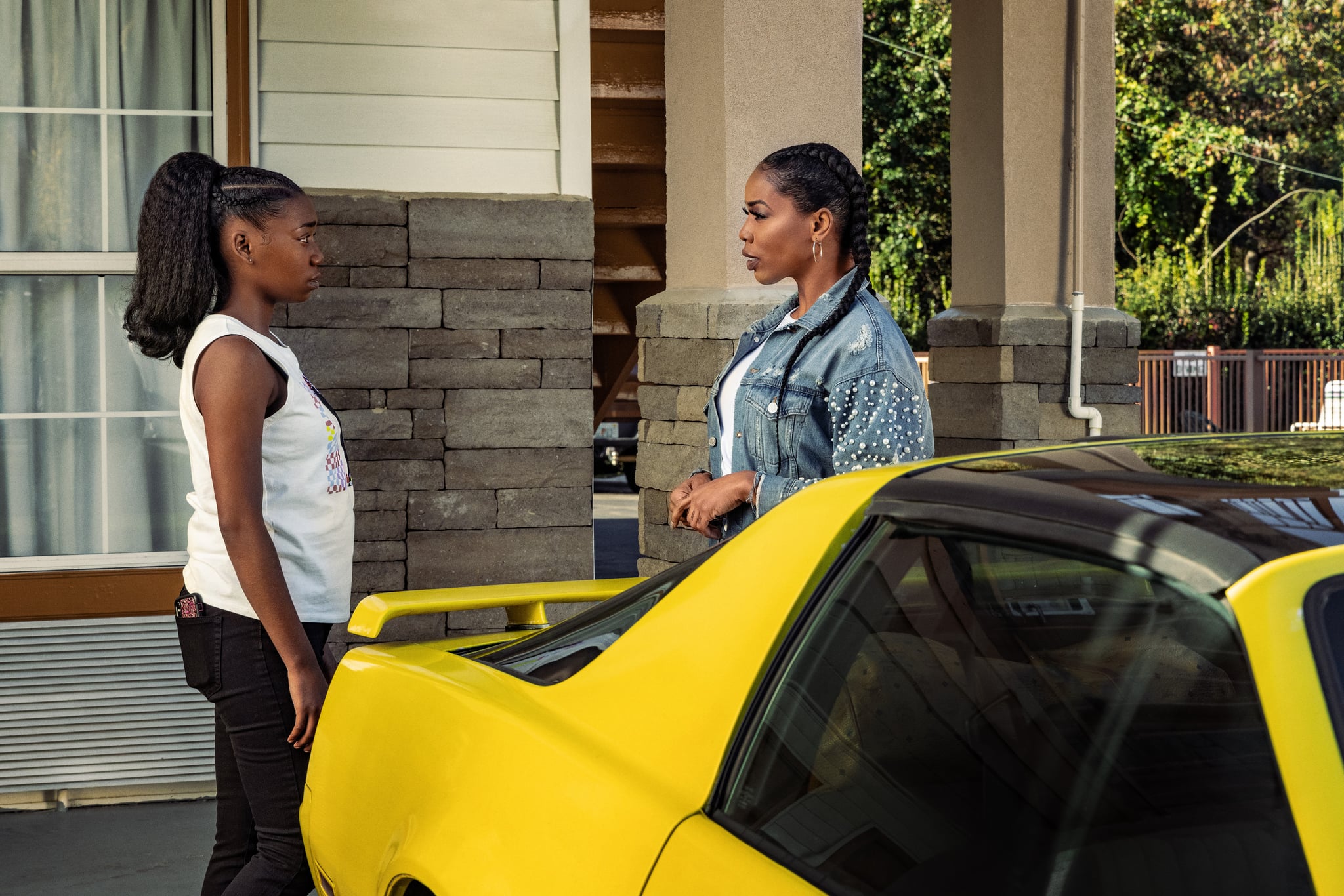 “. . . Mercedes does something that her own [mom] did not, which is hold space so that her child can make her own choice.”

In the episode, Mercedes and Terricka’s ride to the Jackson abortion clinic is accompanied by a walk down memory lane, where the former revisits a humiliating scene between herself and her mother, Patrice (Harriett D. Foy). As viewers see in the diner flashback, teenage Mercedes wasn’t given much guidance or many options from her mother when it came to sex. The gray area Patrice created by participating in the hypersexualization of her daughter contributed to Mercedes’s early pregnancy, and as a result, she wasn’t given a choice over how to handle parenthood in her youth. Mercedes doesn’t want to repeat those same parental mistakes with Terricka.

“Being given that mantle of being a mother in this episode, Mercedes does something that her own [mom] did not, which is hold space so that her child can make her own choice,” Hall explains. “I think what’s really cool about the episode is that it doesn’t shy away from how emotionally sticky it is for women to be in this position of, ‘Do I abort and terminate this pregnancy? Or, do I keep it to full-term and beyond full-term? Like, for life?’ Motherhood is a long job, so this episode really articulates that there are so many different perspectives. Whether it’s Patrice’s complicated, morally gray reasoning as to why Mercedes should have this child, to Mercedes saying, ‘No, this young woman must have a choice.'”

Evans and her character have had a lot of firsts in season two (like, for example, her first same-sex love scene in episode four). The actor reveals, however, that years ago, she helped someone who was once in Terricka’s same position: facing down an unplanned pregnancy. “Yes, I actually coached a little girl. I was in college, and she was younger than Terricka, and this happened to her,” Evans shares. “So I was sadly very familiar with youth getting pregnant and making their own choice, which I think is very important, either to abort or to carry. I think that it’s every woman’s choice what to do with her body, no matter what age she is.”

That memory is where Evans pulled from to channel Mercedes’s emotions in episode seven, as well as the conversations she had with costar Carter in which they “[asked] each other questions to dig deeper with our pain.” Much like how her character comforts Terricka through her difficult situation on the show, Evans did the same for her friend in real life. The experience left a lasting impact: “[All] I could do was not judge her [and] support whatever decision she made, which I did,” she says. “We still talk to this day, and she’s doing amazing.” 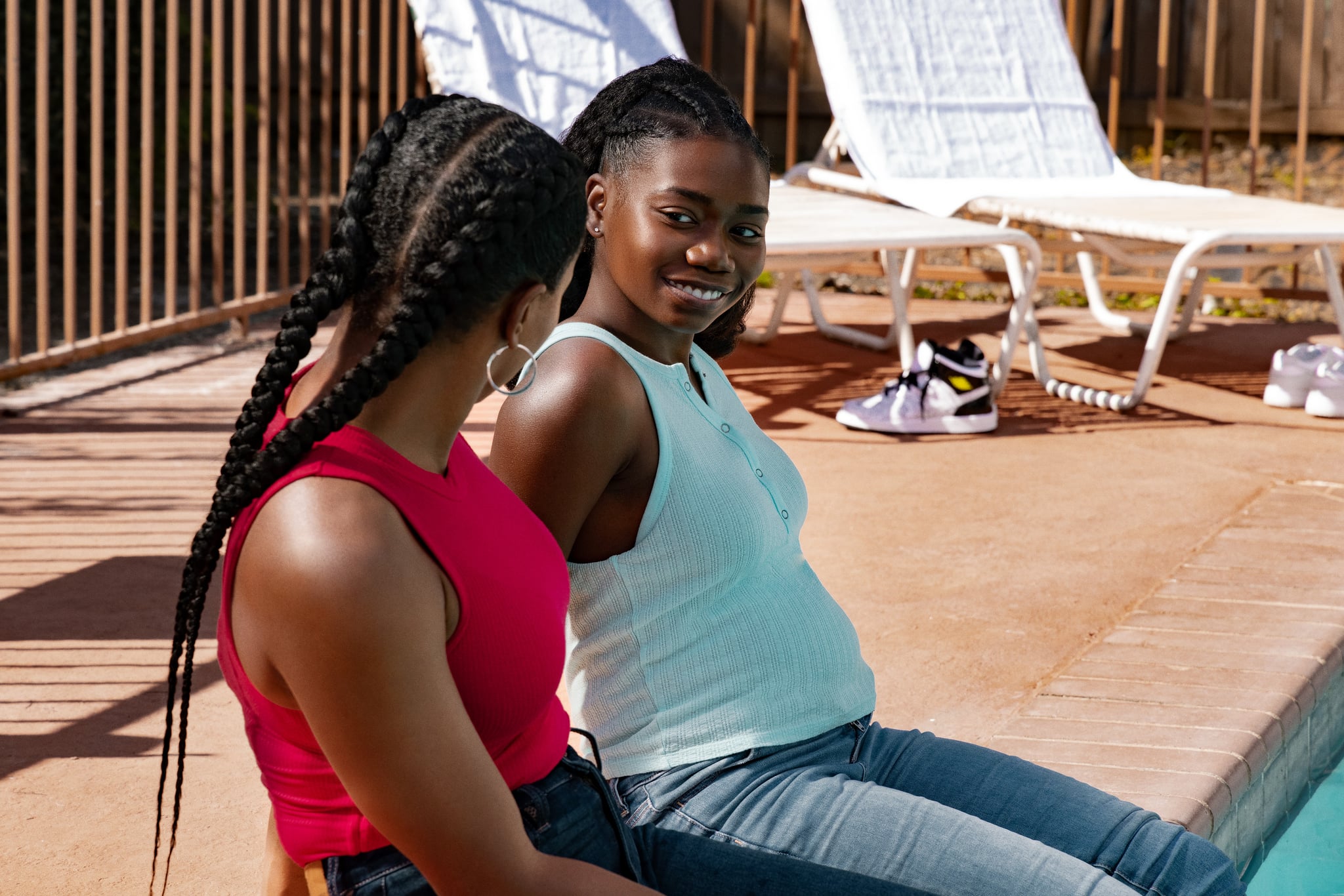 “P-Valley”‘s seventh episode offers a snapshot of what many young Black youth go through in the South when weighing options around pregnancy and abortion. Hall notes that teen pregnancies have occurred in her own family, which is why she wants this particular onscreen storyline to be a conversation starter more than anything. “I want young women, mothers and daughters, fathers and sons, daughters and fathers, to begin to have the conversation, because still, today, people don’t want to have the sensitive [talks] surrounding sex in their own family,” she says.

Meanwhile, Evans is hopeful that episode seven will unlock a new sense of empathy for Mercedes, as we finally see her lean into a more active parenting role. “Vulnerability, that was really important for me,” she says. “Yes, you see Mercedes get angry in episode seven for certain reasons, but I feel like you see her pull herself back, [too], and I don’t think you see that a lot with her trying to control her emotions. I love that you see it twice, specifically where she steps into that mirror and she sees herself and Patrice, or she sees Patrice in the mirrors, meaning that she’s seeing herself, but she has that moment of reflection . . . that’s what makes it so beautiful is that you see Mercedes trying to be more open and grow.”

“I just pray that [they] see the conversation that Mercedes can have with her daughter and those beginnings of conversations start happening within our communities, [too].”

Similar to past installments, Evans predicts “P-Valley” fans will feel “all the emotions” after watching “Jackson.” “I think people are going to be happy, angry, and sad . . . Happy because [pregnancy and abortion] are being talked about with children, women in general, who deserve to have a choice with their bodies,” she remarks. “Then they’re going to get angry because that has now been taken away from us, especially Black women in underserved communities. It’s very heartbreaking when you think of that. And then it’s the sad part because somebody’s going to watch this that knows somebody that probably needs to get an abortion, or wants to get an abortion, and they don’t have that choice. Either they can’t afford it now to drive to a state that’s going to allow it, or it’s illegal where they are. It’s just so many different variables, so it’s a roller coaster of emotions.”

The silver lining is that “P-Valley” is raising awareness about reproductive rights and abortion access in America, giving a voice specifically to young Black women on a platform that has not otherwise displayed this kind of story before. “What’s so beautiful about TV specifically is that it’s such an accessible art form; anybody can get it anywhere,” Hall points out. “This story is literally going to be in the palms of millions of people come Sunday, and I just pray that [they] see the conversation that Mercedes can have with her daughter and those beginnings of conversations start happening within our communities, [too].”

8 Unique Pools Around the World