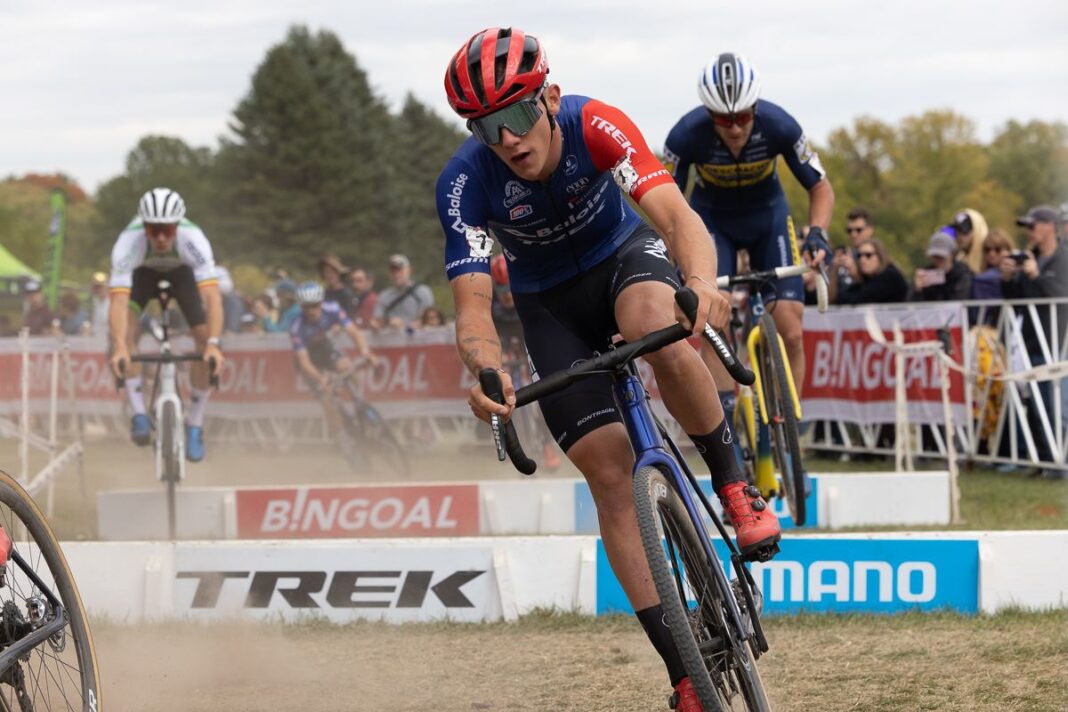 More than an elite race, Sunday’s World Cup Waterloo was a redemptive ride for Thibau Nys (Baloise Trek Lions). Just a year ago Nys competed in the men’s elite World Cup contest but could not finish due to a broken collarbone.

“My mission has been accomplished. I didn’t dare to take the initiative myself in the last [lap], because then I could still be third. But I’m glad Lars is still third. Perhaps this was the best result possible left for us to get,” the 19-year-old said at the finish to Wielerflits.

To finish well inside the top 10 was a big achievement for the 2019 junior World Champion. Last season, his season was all highs and lows, due to the Waterloo crash and recovery. He managed to race several World Cup elite races, with his best finish 19th in Koksijde.

Nys was glad to reverse the outcome from last year in Wisconsin, which he called a ‘nightmare’. He recalled that a light rain began to fall during the elite men’s race, making sections slippery. He fell hard before the run-up located directly behind the Trek Bicycles factory building in a paved transition area.

“I tried to save it, but by trying to save it, I only made it worse. When I saw the footage of the crash, I think I was really lucky to not hit my face on the fence as well. So yeah, it could have been way worse than breaking the collarbone,” he recalled.

“Breaking your collarbone, so far from home, in the second race of the season is every rider’s nightmare, I think. [But] after all, it turned out quite OK. I hope it doesn’t happen again,” Nys told Cyclingnews, a big smile breaking out on his face. “Now I can go into the new season I worked so hard for without any big problems.”

He returned to ‘cross competition only three weeks after surgery but struggled a bit due to the long-term healing process for his entire body. By December he was back in balance and won three U23 races during the busy Christmas racing block. Then at the Belgian Nationals, he crashed again, with his shoulder taking the worst of the impact. He nonetheless salvaged a bronze medal in the U23 category at the Worlds in Fayetteville.

In May he turned the year around with a GC win on the road at Flèche du Sud and in August raced as a stagiaire for Trek-Segafredo. He’ll officially join the WorldTour team next year on a two-year deal for the road, so wants to make the most of this ‘cross campaign. With that in mind, he did not miss participating at the Road World Championships, held in Australia just a few weeks ago.

“Of course, there is another World Championships next year on the U23, in which I can still compete. So I felt that that was the right choice.”

“I think this one is already a pretty heavy trip in the beginning of the season and to add some more jetlag to it would not be perfect. So, yeah, I’m really happy with the decision I made.”

“I will not stop riding cyclo-cross. It’s my goal to ride more on the roads in the next couple of years but still feel like a cyclo-cross rider. So not only race three or five or maybe 10 times but really have a cyclo-cross season, maybe starting later and finishing a bit earlier.”

Nys heads to Fayetteville, Arkansas for the next round of the World Cup series, and he plans to also compete in the C1 race on Friday.

He’ll again be part of a long list of rising stars vying for podiums in elite races. Waterloo turned out to be a playground of youngsters, 11 of the field of 46 men were still teenagers, the youngest Benjamin Sweet of Canada who turned 18 five days before the race. Joining Nys in the top 10 on Sunday were two riders aged 23 or younger, his Baloise Trek Lions teammate Pim Ronhaar in sixth and Nils Vandeputte (Alpecin-Deceuninck) in eighth.