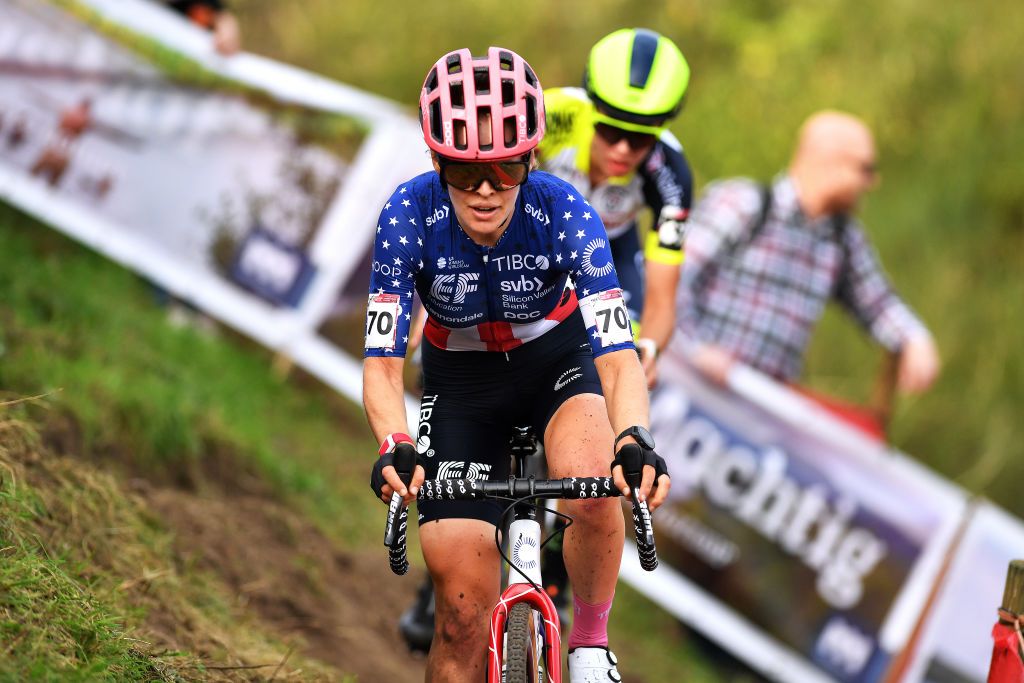 The regulars of the men’s field in cyclocross received stinging beat-downs by part-timers Mathieu van der Poel, Wout van Aert and Tom Pidcock this weekend, who’ve come off impressive road campaigns and gone straight to the top of the podium. For the women, however, it’s been quite the opposite, with the CX specialists taking centre stage. Somewhere in the middle is Clara Honsinger.

The pandemic in 2020 pushed Honsinger to race cyclocross full-time in Europe because there were no races in the US. However, she has now raced her first season with a WorldTour team, EF Education-TIBCO-Silicon Valley Bank, and had a more extended road season that included the Classics.

When she began her cyclocross season this year, the landscape had changed. Three 20-year-old specialists have dominated in the elite women’s fields: Fem van Empel leads the World Cup ahead of Puck Pieterse and Shirin van Anrooij and the trio have been pouring the pressure on the more established riders.

Honsinger says they have raised the level of cyclocross but she’s been holding her own, finishing inside the top 10 in most of her races, with her best result a fourth in the Koppenbergcross.

“It’s amazing,” Honsinger said when asked about their success. “In the past three seasons, as they’ve come into the sport, the speed and depth that the field has developed. I think back to when I first started racing, and the women at the fast end of the races were incredibly fast. However, there were maybe three women at that speed. Now we’re looking at eight women at that speed.

“They’ve been pushing each other to go faster and faster, and get stronger and stronger. And it’s amazing that the strides that the sport has taken in the women’s field the past few years, I think it’s definitely been at a rate of growth faster than any other discipline and definitely faster than the men’s.”

Honsinger skipped most of the early season races in the US but scored a victory in her first outing at the Trek CX Cup C1 race in Wisconsin and was the top American in the first World Cups in Waterloo and Fayetteville.

She started her European campaign in Nommay, where she scored confidence-building victories in two C2 races there in October. Rather than chase the World Cup, Superprestige or X2O Trophy series, Honsinger is aiming for consistency and a steady build toward the World Championships in Hoogerheide, February 4-5, 2023.

“I am racing a little bit shorter of a schedule this year. I omitted the US races at the beginning of the season, because I wanted to take a little bit of time at home after the road season,” Honsinger said.

Since Honsinger rose to the upper echelons of cyclocross amid the pandemic, where she ended the 2020 pandemic-shortened season as the fifth-best rider in the world, she’s had to temper her expectations. The World Cup is an especially big ask for most riders since the UCI expanded it to 14 rounds, with races almost every weekend.

“It used to be that North Americans could be competitive in the World Cup overall series,” Honsinger said. “When there are fewer races they could fly back and forth to on weekends to make the races. Now when there’s a World Cup every single weekend, it’s just really hard to make that travel turnaround – even for the Europeans. I’m omitting some races, just focusing on having good results at the races I do race, then coming back for a little time at home midseason and doing our national championship.”

This season has looked somewhat different to last year for the 25-year-old. Her former cyclocross team, Cannondale-Cyclocrossworld, folded. Now she is supported by her road team who formed a ‘cross programme for her and Zoë Backstedt.

“I was really lucky in that my road team, the EF Education-Tibco-Silicon Valley Bank WorldTour team, was able to pick me up and put together a cyclocross programme for the fall. They also took on Zoë Beckstead, who is, of course, the junior cyclocross world champion.

“It’s a little bit different, but I think it’s for the best in that it’s really nice to have one programme all year long. I’m not being pushed to race an extended road programme and I’m able to transition into cyclocross when I like. It’s honestly such a great situation.”

Honsinger is the favourite to win her third national title at the USA Cycling Cyclocross National Championships on Sunday in Hartford, Connecticut. Still, she is trepidatious about having limited interactions with the domestic fields after racing in Europe since October.

“I definitely felt pressure for this race,” she said. “I feel that I’m regarded as the favourite having won this race and consistently being the top US rider. So to do well is really important to me.

“However, it’s a little bit of a mystery because I’ve been over in Europe while a lot of the US riders have been racing in North America, so I don’t know how fast they are, how they’re riding their bikes. It’s a little bit scary to go into this race and have no kind of race background with them.”

While Honsinger won’t have direct familiarity with her competitors and their form, she has been keeping tabs on the US races thanks to GCN streaming the US Cyclocross (USCX) series events.

“I spent some time watching races from earlier in the season that we’re lucky enough to have on TV and observe their riding but it really won’t be until the light turns green on that Sunday that I get a feeling for how the race is going to play out.”

After Nationals, Honsinger will head back to Europe for the intensive ‘kerstperiode’ races in December to build toward Worlds.

“The big goal is winning nationals of course, and from there I head straight to Europe. Over that Christmas block, some races that I’m really looking forward to are the Gavere World Cup on the 26th of December and then GP Sven Nys in Baal on the first, and then the Zonhoven World Cup later in January. I’m really looking forward to that. I’ve never done it before, as well as taking a little training camp down in Spain before wrapping up my cyclocross season and at the World Championships in Hoogerheide.”

Honsinger then heads straight into her second WorldTour season where she will be “hitting the Classics so I feel sharp before taking a good break late in the spring, and that’s when my offseason will be.”

Don’t miss a second of our coverage of all the action from this season of Cyclocross with a full subscription to Cyclingnews. Join now