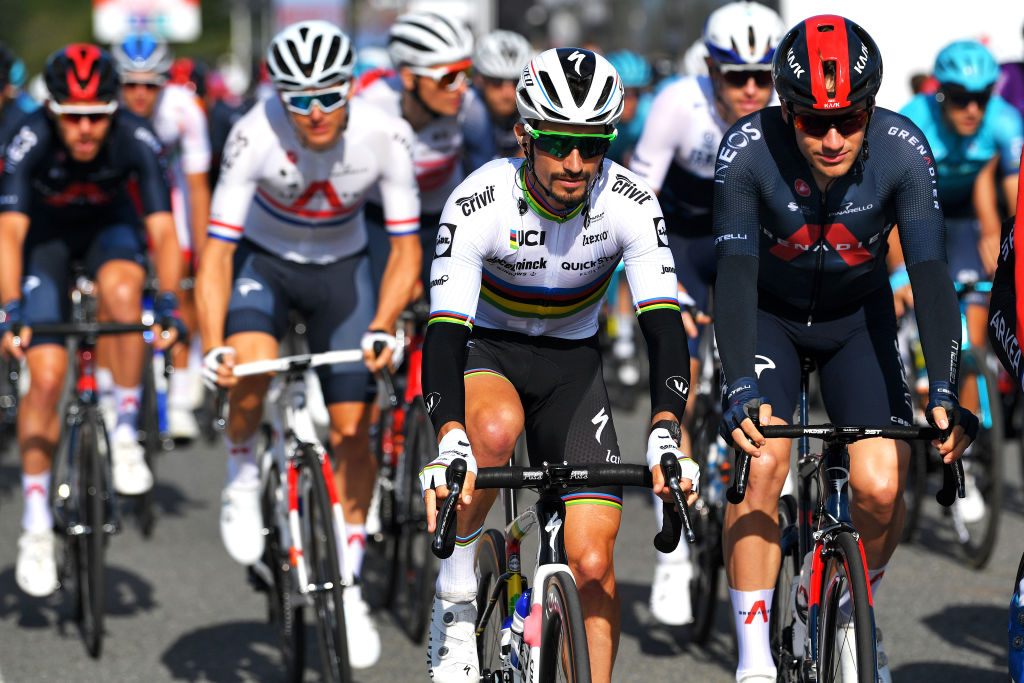 The Tour of Britain will see Julian Alaphilippe race for the final time as World Champion and Deceuninck-QuickStep teammate Mark Cavendish contest the sprint stages, while Wout van Aert (Jumbo-Visma), Michael Kwiatkowski (Ineos Grenadiers) and Michael Woods (Israel Start-Up Nation) will all use the eight-day race to fine-tune their form ahead of the UCI Road World Championships and their end of season goals.

The Tour of Britain returns between September 5-12, ending on the same day as the European Road Race Championships but exactly a week before the time trial at the World Championships in Flanders.

The 2020 Tour of Britain was cancelled due to the COVID-19 pandemic but this year’s race has attracted a quality field for the eight days of hard racing.

The 2021 race starts in Cornwall and heads north via Wales and an 18.2km time trial before finishing in the north of Scotland. Stage 2 in Devon features 3,500m of climbing between Sherford and Exeter. Stage 4 is an uphill finish on the Great Orme in Llandudno in Wales. A finish in Warrington on stage 5 is followed by an undulating Pennine stage from Carlisle to Gateshead on stage 6. The race ends with two Scottish stages, with the 2021 winner crowned in Aberdeen on Sunday, September 12.

Alaphilippe and Cavendish will have support from Tim Declercq, Davide Ballerini, Mikkel Honoré and Yves Lampaert, with Cavendish chasing  an 11th sprint win, some eight years after his last win in London on the final day of the race. Alaphilippe won the 2018 Tour of Britain and will lead the French team at the World Championships.

Wout van Aert (Team Jumbo-Visma) has opted to ride the Tour of Britain rather than this week’s Benelux Tour so he can spend more at altitude and test his time trialing ability one last time before targeting the world title in both the time trial and road race.

Van Aert’s success at the Tour de France proved he can win sprint stages and the time trial and perhaps the overall classification. He will have the support of George Bennett, Chris Harper, Pascal Eenkhoorn, Tobias Foss and German veteran Tony Martin.

Ethan Hayter is expected to lead Ineos Grenadiers at the Tour of Britain after his win at the Tour of Norway and fast finish. He will have the support of Richie Porte, Rohan Dennis, Welshman Owain Doull and young Spaniard Carlos Rodríguez.

The Tour of Britain will be one of the final races of Greipel’s 16-year career, during which time he has claimed over 150 victories. The German sprinter has won at least one stage in each of his four rides in the Tour of Britain, amassing seven victories in total.

“Combined with the truly spectacular and challenging route we’ve designed, the quality of this year’s start list makes me believe that we’re about to witness one of the most exciting editions of the modern race to date,” Tour of Britain race director Mick Bennett said.

“The fact that we were unable to run the Tour of Britain in 2020 was enough to raise the excitement level going into this year’s event.

“We look forward to seeing the roads of Great Britain lined with spectators all the way from Penzance to Aberdeen, and I would encourage everybody planning to attend the race to respect their fellow spectators and, of course, the riders, as well as following local COVID-19 guidance.”

Cyclingnews will have full coverage of the Tour of Britain with stage reports, news and exclusive interviews.

Fun Last Day of School Activities Your Students Will Love

The latest Trunk Club – The Fitnessista

The Power of Chi, the movie, and a response

9 Beautiful, But Functional Objects for The Home