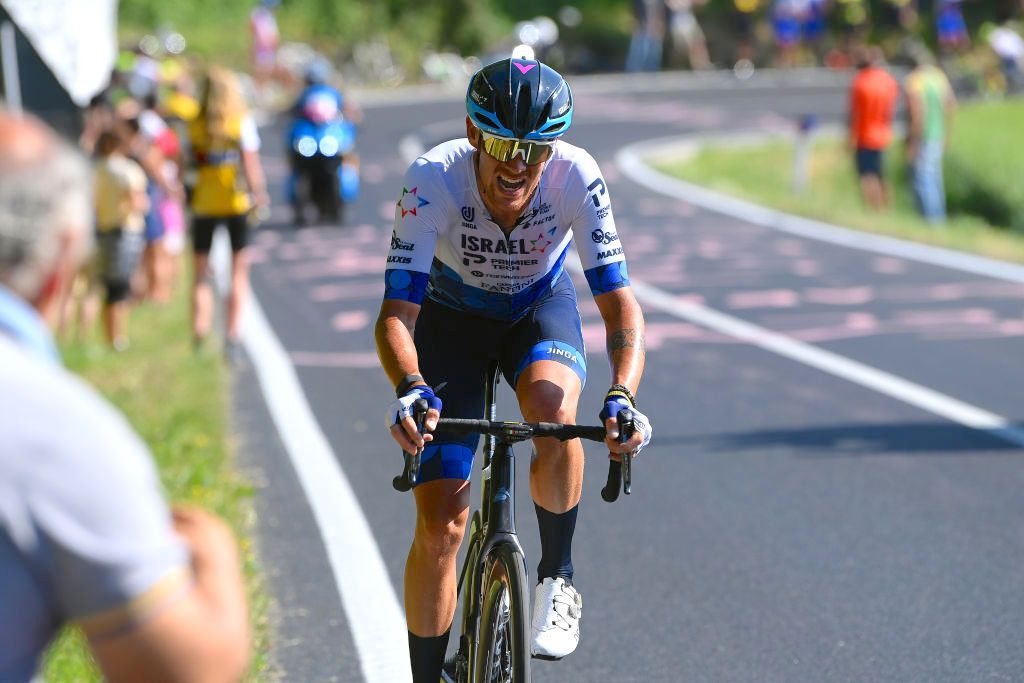 Matteo Trentin didn’t have any doubts. In the honeyed light of an autumn afternoon in Vicenza, there was one wheel to follow above all in the winning break at the Giro del Veneto. To win the race, he knew he couldn’t give Alessandro De Marchi an inch.

“Today, the person who worried me the most was obviously De Marchi,” Trentin said after he had pinned back his compatriot’s late attack and then won the sprint. “He’s someone who had to attack and normally if you give him three metres, then buonanotte, you won’t bring him back.”

De Marchi remains among the peloton’s most reliable strongmen after more than a decade as a professional. His peers know it only too well, as Trentin’s vigilance on Wednesday showed, yet the Friulan somehow finds himself reaching the end of the season still without a contract for 2023.

“I’m simply waiting. We have some leads that could open, but that haven’t opened yet, so I’m simply trying to focus on the races,” De Marchi told Cyclingnews before the start of the Giro del Veneto, which he would finish in fifth place. “I’m waiting for something to move and for certain things to fall into place to try to find somewhere.”

Cycling has always been a sport with an absurdly short memory. Just last year, De Marchi wore the maglia rosa for two days at the Giro d’Italia. The feat was notable not just for the athletic endeavour, but for the eloquence that followed in a thoughtful post-stage press conference, where he discussed everything from the campaign for justice for Friuli native Giulio Regeni, abducted and killed in Egypt in 2016, to his own, unfettered vision of the sport.

“My way of doing things is a lot more romantic than modern cycling allows,” De Marchi said then. “Maybe my style isn’t the most practical. There have been races where I spent the day in the break and got caught, and I was still happier with those than races where I got a placing.”

Still, De Marchi showed he knew how to win last season, too. A heavy crash ended his Giro prematurely, but he rallied to sign off on his 2021 campaign with a fine victory at Tre Valli Varesine. It all augured well for the 2022 season, but a sequence of illnesses ruined his Spring, bringing an early end to three successive stage races.

The 36-year-old somehow struggled his way through the Giro, but it was only at the Vuelta a España that the vim of old truly returned. His aggression there has continued in the late-season Classics, including almost 100 miles off the front at Il Lombardia last weekend.

“This season, I was ready to carry on from how I finished last year, because I’d shown that I’d sorted myself out after the crash and recovered from it,” De Marchi said. “But what happened was that COVID and two other illnesses in the spring blocked me, and I had to start again from zero right before the Giro d’Italia. There wasn’t a real, 100% recovery. That’s only come about now in this last part of the season – but obviously it’s October, and that’s a bit late.”

De Marchi has spent the past two seasons with Israel-Premier Tech, and staying with the squad remains a possibility, despite their imminent relegation from the WorldTour. “For me, the issue of being WorldTour doesn’t change what’s on the table. At the moment, riding here is a possibility too, but I’m waiting for it to solidify in some way,” said De Marchi, who acknowledged that the squad’s forlorn hunt for the UCI points necessary to avoid the drop had made it a complicated year.

“It certainly wasn’t an easy thing to deal with, and we did our best. Some seasons can be good and others less good. Unfortunately, we’ve run into in a negative season, and it’s come at a bit of a delicate moment. The team has had to face up to a very difficult and stressful situation, that’s inevitable. Nobody can deny that the second part of the season was very difficult.”

Despite the twin pressures of racing for UCI points and riding to put himself in the shop window, De Marchi carved out space in his calendar to compete in the inaugural UCI Gravel World Championships last Sunday, placing seventh in Cittadella just a day after his long raid at Il Lombardia. His own forays into recreational gravel – not the mention the lure of the maglia azzurra – meant he couldn’t resist.

“It was an opportunity that I was given, and it felt like it would have been a mistake to waste it,” said De Marchi. “I enjoyed it, even if it wasn’t exactly gravel racing as we know it. But I feel happy to have participated in the first edition, and lucky too.”

De Marchi will hope his luck changes in his final race of the season at Sunday’s Veneto Classic, where he will again be among the favourites, even if he noted that his current predicament hasn’t much altered his approach to these late-season events. He lines up each time with the same spirit that informed his career since he turned professional with Androni in 2011. It’s carried him this far, after all.

“OK, this year, in the end, I have an additional motivation, but the substance of my approach doesn’t change: when I have something to give, I try to race on the attack and play my hand no matter what,” De Marchi said. “And I’m sure that if I get another contract, I’ll be able to continue doing that without problems. I have no doubts about that.”