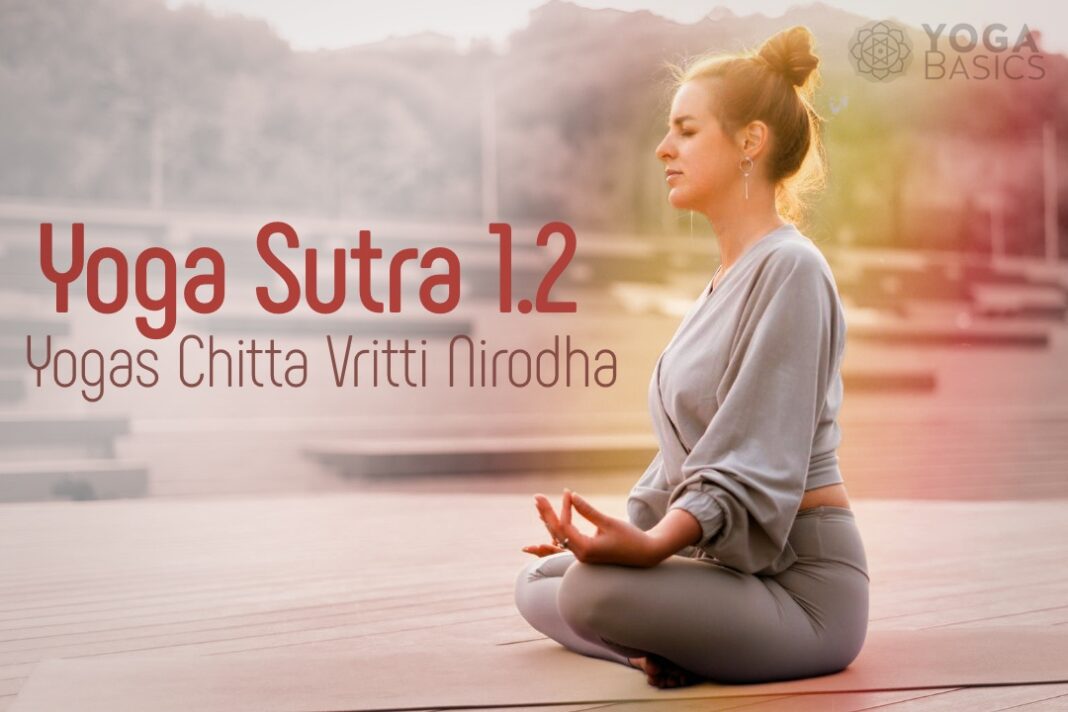 When the sage Patanjali outlined the practice of yoga two thousand years ago, he used a form of short, easy-to-remember sayings that could be recited or chanted as slokas, the Sanskrit root for the English word “slogan.” Today we know slogans as catchy phrases used to promote products or sum up larger ideas, like “It’s the real thing,” or “Be all that you can be.” But if yoga has one ageless, all-encompassing slogan, it’s Patanjali’s second sutra “yogas chitta vritti nirodha.”

The Sanskrit phrase “yogas chitta vritti nirodha” is commonly translated as “yoga is the stilling or controlling of the modifications or fluctuations of the mind.” As a phrase, Yogas citta vrtti nirodha may not be as catchy as “Just do it,” but as an experience, it’s familiar to nearly every yoga student. You know it as the blissed-out feeling that follows an asana class, or that moment of pure awareness during meditation. You feel it when the thoughts slow and the mind becomes anchored in the present moment. The second sutra is the very heart of yoga, and a closer look at the Sanskrit meanings reveals why.

The four functions of chitta

According to yoga philosophy, the mind has four functions. Manas is the aspect of the mind that records external stimuli. Buddhi, sometimes called “higher mind,” discriminates between and classifies these incoming impressions. Ahamkara is the ego mind, which filters everything through the lens of “I/me/mine.” The sum total of these creates the citta or “mindstuff,” a vast storehouse of conscious and subconscious impressions.

The fluctuations of vritti

“Vrtti” is often translated as thought waves or the modifications of the mind, but when this root is used in asana names (such as Parivrtta Janu Sirsasana or Jathara Parivartanasana), it means to revolve or turn around. Each of us has experienced how the vrttis—which include emotions, memories, and imagination—spin around inside the mind, especially when we try to sit for meditation.

When vrittis arise, they create a kind of ripple effect throughout the body and nervous system. When these ripples become patterns, they form samskaras, or impressions left by past experiences. They form the basis for future reactions, habits and mental fluctuations, which bind us to our karma.

Calming the mind with nirodha

The final word in Sutra 1.2 has been translated variously as restraint, control, or mastery, but nirodhah also implies a process of self-training. Through the process of yoga, we learn to restrain the vrttis, which many teachers have likened to calming the surface of a choppy lake so that we can see all the way through to the bottom. When we get to the bottom of this lake, we find Atman, the true self.

When we catch ourselves caught in a mental fluctuation, we can simply pause, acknowledge the distraction, and return our focus back to the breath. As we repeat this process over and over again, we begin to train our attention and restrain the vrttis. It becomes easier each time we try to return to the present moment.

“Yoga is both the means and the end,” says B.K.S. Iyengar in his commentary on the Yoga Sutras. In other words, our aim in yoga practice is to realize a unitive state, which Iyengar defines as “integration from the outermost layer to the innermost self.” We integrate; we don’t banish thoughts or repress memories or emotions. Rather, we free ourselves from the turmoil that they (the vrttis) cause by training the mind to observe, discern, and detach through asana, pranayama, meditation, and other yogic practices.

Practicing yogic breathing exercises like alternate nostril breathing and sama vritti pranayama will quickly calm an agitated mind. Soothing and grounding yoga asanas like Child’s pose, Supine Bound Angle  and Seated Forward Bend promote deep relaxation and help quiet an agitated mind. Devotional yoga practices such as chanting mantras, reading ancient scriptures and singing Kirtan songs help calm and soothe strong emotions. A regular meditation practice will help you develop your ability to be still and quiet. Meditation helps us slow down enough to notice and categorize the vrittis arising within us. Lastly, pratyahara, the withdrawal of the senses, helps you let go of distractions and mind chatter and a following a yogic diet will encourage mental equanimity.

Finding your true self

As the first chapter of the sutras continues, Patanjali gets even more specific about the nature of the mind, the obstacles along the yogic path, and the ways we can overcome them. But we don’t have to reach the end of the journey in order to catch glimpses of the true self. Yoga as a path offers a multitude of ways for finding peace within the sometimes-dizzying kaleidoscope of sensations, information, and stuff of modern life. And though most people practicing yoga today came to it via asana as a form of exercise, many have discovered the meaning of the second sutra—that the main goal of yoga is “inner-cise.”

This is an ongoing process of self-discovery, and it requires patience, perseverance, and commitment. As you begin to understand yourself better, you start to see what lies beneath the surface of things, and you become able to recognize when something isn’t working right for you anymore. Through regular practice, you’ll slowly peel back layers of conditioning and habituation until you reach the core of who you truly are.

Shopify reports $1.2B net loss, lays off 10% of its workforce