Qi Gong: A Guide to This Ancient Chinese Practice 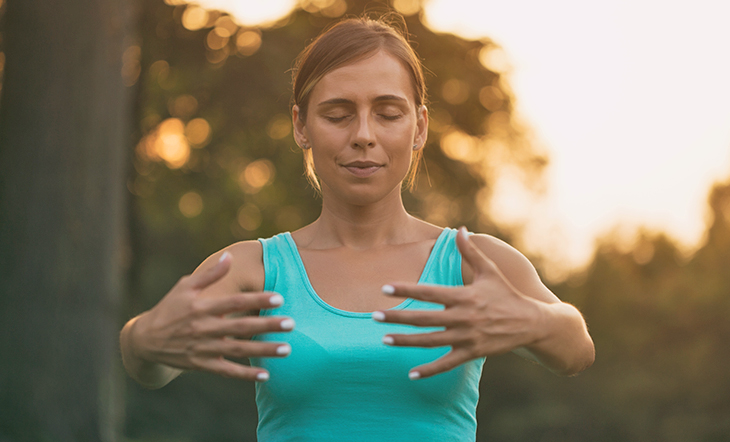 You’ve probably heard of Tai Chi, but have you heard of Qi Gong? Tai Chi and Qi Gong share similarities, such as both being a central practice rooted in Traditional Chinese Medicine. Tai Chi actually descended from Qi Gong in ancient China, and both are practices that balance your body’s energy (or qi).

In this article you will learn more about the similarities and differences between Tai Chi and Qi Gong. You’ll also learn how Qi Gong can support your healing, improve your balance and connect you deeply with a sense of wholeness.

I met this ancient practice serendipitously, deciding one day to take a different path to work than my usual. As I approached the community park courtyard, I saw a sea of people, each standing one arm’s distance apart, engaged in slow, gentle, wave-like movements, their faces tranquil, with the faintest hint of a smile.

They were practicing Qi Gong.

My body needed this. Four years later, I became an instructor of this healing practice and now support women to heal and reconnect with their bodies, hearts and minds through ancient wisdom of Yoga, Qi Gong and Chinese Medicine philosophy.

What Is Qi Gong? How Is It Different From Tai Chi?

According to a 2014 study, this energy cultivation practice is believed to be at least 4,000 years old, and has its roots in Traditional Chinese Medicine and Taoist philosophy.

Qi Gong is an umbrella term for a set of internal energy cultivation practices which include shaking, tapping, stationary stances, fluid, flowing forms, meditation, visualization and breathing techniques that has its roots in Taoist philosophy and Traditional Chinese Medicine (TCM).

Just like within Yoga there are various types and lineages of Yoga such as Ashtanga, Yin Yoga, and so on, there are multiple types of Qi Gong including Buddhist Qi Gong, Medical Qi Gong, Martial Qi Gong, and so on.

Tai Chi is the the short-form of Taijiquan 太极拳, a Martial form that involves more complex footwork with fixed sequences that generally take longer to master than Qi Gong. As mentioned previously, both are ancient practices rooted in TCM.

Who Should Practice Qi Gong? What Are the Benefits?

The earliest form, Dao Yin (导引), was practiced by Taoist priests as part of their pursuit to attain immortality, then later Shaolin monks and other martial arts practitioners.

Though it’s unlikely you’ll become immortal from maintaining a regular practice, clinical studies have shown this healing practice offers a host of physical and mental health benefits which include an improved sense of balance, greater mental focus, lower levels of stress and anxiety, and decreased chronic disease risk.

In the 1950s, medical doctors started to formalize Qi Gong and promote it as a health-boosting exercise for patients, calling it ‘Medical Qi Gong’. Since then, prominent institutes including Harvard Medical School have advocated the benefits of Qi Gong.

This energy cultivation practice has been shown to help heal with various conditions, including arthritis, as detailed in a 2017 clinical study, breast cancer, menopausal-related problems, menstrual disorders, and a variety of physical and psychological illnesses, as described in a 2015 study.

An idea that you as an individual are a microcosm of the macrocosm that is the universe, and that everything that can be found in nature can also be felt and experienced within your internal landscape.

The secret to a healthy, happy and long life is to align with nature, which can be experienced by seeking to embody the balance of YinYang, two equal, opposing and complementary forces that underpin everything.

And by flowing with the Five Elements (五行), the five moving forces that drive the unfolding of all phenomena such as the seasons.

Qi Gong or Yoga? Or Both?

Modern Yoga, as taught in the West, and especially in styles like Power Vinyasa Flow, has often become associated with athleticism and is often synonymous with being a ‘workout’, attracting a strong following of millennials ranging from early 20s to late 40s.

On the contrary, most people turn to Qi Gong for healing, with a core following of practitioners being those in their 60s and above, those recovering from injury or those with chronic health conditions like arthritis or heart disease.

So which is better? In truth, it depends. Both tools help heal the body and connect one with a greater purpose. Neither is better than the other, though depending on your individual circumstances you might have a preference. Both are embodied mindfulness practices that empower practitioners to feel good and live better.

To understand if either modality is suitable for you, let’s examine the differences.

Qi Gong Vs. Yoga: The Main Differences Between the Two Practices

Firstly, most of Qi Gong is practiced in a standing position, and can be adapted for a seated position, while Yoga poses can be floor-based (supine, prone, hands and knees), chair-based or standing.

Second, Yoga styles like Hatha, Restorative and Yin Yoga focus more on static holds, while Qi Gong forms such as shaking, tapping and flowing forms can often look and feel like moving meditation.

Yoga poses tend to be more linear, whereas Qi Gong has a heavy emphasis on spiraling movements that cut across different planes. Because both refer to a wide range of practices, however, there is diversity.

For example, Ashtanga Yoga or Vinyasa Flow yoga classes can feel more like a fluid, flowing form of moving meditation while some Qi Gong forms are static; stances are held and there is no physical movement but your awareness is drawn inwards to the fluctuation in your energy and breath.

Lastly, Qi Gong stances tend to have a more soft, rounded look and feel to them than Yoga poses.

Comparing fundamental stances for example, in Yoga, Tadasana Pose (Mountain) is traditionally taught with feet as close together as possible, ideally big toes touching and arms down by the sides.

The secret to a healthy, happy and long life is to align with nature, which can be balancing for your YinYang energy.

Whereas in Qi Gong, Wu Ji 无极 (Limitless stance) takes a more rounded shape, with one’s feet hip distance apart, joints spacious and soft, knees bent slightly and tailbone tucked under just slightly to allow spaciousness in the lower back and kidney area, and a tiny gap between the arms and armpits.

One way to compare these modalities is to place them along a spectrum of Yin-Yang (阴阳), where Yin embodies stillness, ease and being, while Yang represents movement, effort and doing.

I see Hot Yoga, Ashtanga Yoga and Power Vinyasa as being on the furthest end of the spectrum associated with movement and effort, followed by Martial Qi Gong.

On the opposite end of the spectrum, associated with stillness and ease are the practices of Yoga Nidra, Restorative Yoga and Yin Yoga. Somewhere in between these practices are Hatha Yoga, gentle flow and general Qi Gong.

The Takeaway (Plus a Unique Yoga Class to Try)

In closing, Qi Gong offers a host of benefits, from physical to mental, and is a wonderful alternative or complement to your Yoga practice. This ancient Chinese practice will support your healing, improve your balance, and help you cultivate a deep sense of wholeness.

For me, adding it to my movement repertoire has helped improve my spatial awareness, mobility and balance, and I’ve seen this trickle into my Yoga practice. This is why I encourage all my students and the Yoga teachers I mentor to try this moving art.

Try This Unique Yoga Class on YA Classes

In this yoga class, you’ll explore the 5 Tibetan Rites, which are a 2,500 year-old form of Tibetan yoga with exercises (rites) that are designed to increase your longevity, just like the other ancient practices we explored in this article!

Do you practice Qi Gong? Does it balance and energize you? Please share with us in the comments below – we love hearing from you!

Kelly Rowland Reacts to Being Told She Was Second to Beyoncé