Om Mani Padme Hum: The Meaning Behind the Mantra 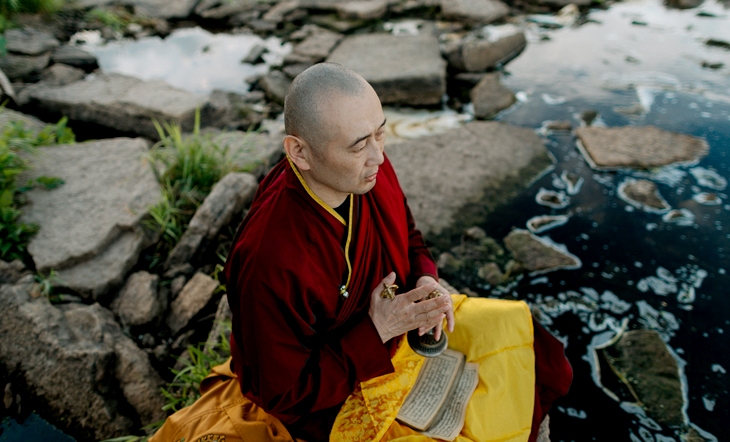 Next to OM, om mani padme hum is one of the most commonly chanted mantras in yoga.

This special yogic chant is Sanskrit, and it’s pronounced OHM-MAH-NEE-PAHD-MAY-HUM. It’s comprised of four words, and those four melodic words are all the words on many of those colorful Tibetan prayer flags.

Om mani padme hum is an ancient Buddhist mantra. In English, this rhythmic chant literally translates to “Praise to the Jewel in the Lotus.” This might not make much sense to new yogis or even to well-practiced yogis, but the mantra’s essence is powerful and pure.

As the Dalai Lama said, its meaning is “great and vast” because all the teachings of Buddha are wrapped up in this one phrase.

Read: An Introduction to Buddhism, The Four Noble Truths, and The Eightfold Path

There are a lot of different meanings and different opinions on what each syllable means.

Generally, each syllable represents one of the six goals of Buddhist existence and helps heal or purify and bring forth the positive qualities associated with that goal.

Let’s take a look at the meaning of each word in the mantra:

Chanting in general soothes the senses and sends energy to the parts of your body (or the chakra centers) that most need it.

Calming sounds are known to help heal the body and mind. Plus, with all the division in the world, chanting allows all voices to come together to show unity and oneness not just of the self, but of the community and world.

There are many reasons why yogis choose to chant this powerful mantra, but here are a few main benefits:

The Takeaway Behind This Powerful Mantra

Many people consider this to be the most powerful, all-encompassing chant in yoga. So don’t be afraid in your next yoga class. Give it a try and chant away!

This article has been read 100K+ times. Wowzers!

How and Why a Retail Salesperson Should Create a Personal Brand