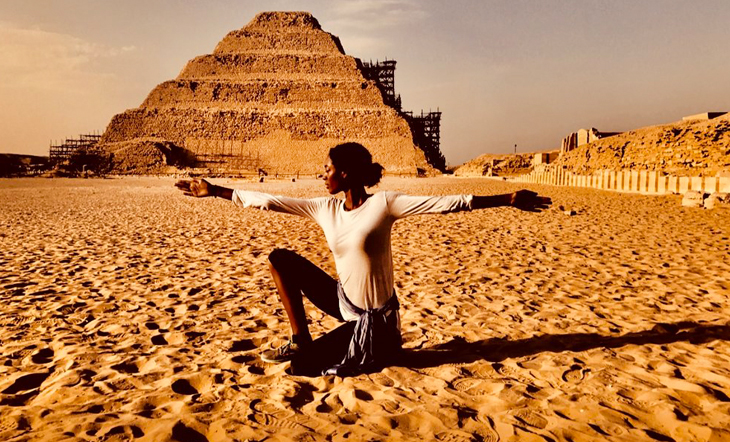 The Western world highly acknowledges India and its influence for yoga practices all over the world, but did you know that the yoga depictions on the walls of the Egyptian pyramids are examples of Kemetic Yoga of ancient Egypt?

This article will review the history of Kemetic Yoga, explore this ancient yoga practice and discuss the benefits.

The Lineage of Kemetic Yoga

According to the text, Egyptian Yoga: The Philosophy of Enlightenment, there is documentational proof of scriptural and iconographical evidence of Kemetic Yoga practices and principles; which includes meditation, occurring within ancient Egypt.

This evidence predates yoga’s existence in India and early civilization.

For our history buffs who could use a bit more context, here is further information from Return to Kemet’s blog, What is Kemetic Yoga?

Curious About the Origin and History of Yoga? Here’s the CliffNotes Version

“The Indus Valley Civilization, also known as the Harappan Civilization or the Indus Sarasvati civilization flourished from 3300 BC to 1800 BC. This territory extended from Baluchistan on the Iranian border of Pakistan beyond New Delhi, India and from Afghanistan and the Himalayan Mountains to Mumbai.”

Present day studies and research suggests that the Indus Valley was home to the indigenous Dravidians and Sanskrit speaking Aryans.

This is where it is said that “the great cultural and spiritual fusion” took place. According to suggestions from historical records, the Dravidian race migrated out of Northeastern Africa from areas within Egypt, Sudan and Ethiopia. Then they settled in the valley of the Indus River where they remain presently.

Through this research, we can assume that the Nile Valley cultural exchanges and the Nile Valley African populations migration ultimately led to their merging with the inhabitants of the Indus valley of South Asia.

To further reference the Ancient Egyptian evidence of yoga, Return to Kemet states in the same article:

“Images depicting positions resembling common modern-day yoga and meditation asanas have been recovered in the Nile Valley that date back to an earlier period that the Indus Valley records. These images have been acknowledged as precursors to modern-day yoga practice.”

Now that you understand the lineage of this ancient yoga practice, you may be wondering how this practice compares to yoga practices deriving from India? Let’s dive in!

What Is Kemetic Yoga?

Kemetic yoga’s birth originates from one of the oldest civilizations of Ancient Egypt in Northeastern Africa, Kemet. The practice’s creation focuses on studies, translations, and interpretations of hieroglyphic texts of Kemet and images of yoga on the Kemetic temples (Ancient Egyptian pyramids).

Kemetic teachings refer to the yoga practice as an expression to represent the journey of the lower and higher human self.

The Urban Yoga Foundations further helps us to understand the history of this practice by stating that the term yoga, which translates to “yoke” in Sanskrit, one of the languages presently spoken in India, is not indigenous to Kemet.

Instead, Kemetic teachings refer to the practice of yoga as Smai Tawi, which translates to “union of the two lands”. This is not a reference to physical land; more so, an expression to represent the journey of the lower and higher human self.

Kemetic Yoga Skills describes the this ancient yoga practice as including physical movements combined with controlled deep breathing and meditation which does sound similar to the practice we follow from India in the Western world.

Kemetic Yoga is based on cultivating nature’s application of geometry and physics into yogic forms.

However, it differs in the sense that the postures of Kemetic Yoga pay homage to Egyptian Gods or spiritual deities whereas yoga representation from India pulls from more animal and earthly references. You can read more on this in The Urban Yoga Foundations article, “What is Kemetic Yoga”, written by Sehu Khepera Ankh.

How Is Kemetic Yoga Different?

Return to Kemet says the flow of Kemetic yoga can be best characterized by a series of geometrical postures, a rule of four breath, and tongue connection.

Poses or postures within the Kemetic Yoga practice flow through spinal connection, call for the hands or fingers to take on the shape of a pyramid, and resemble geometrical shapes such as squares or triangles.

The goal of Kemetic Yoga is to allow nutrient and oxygen supply to flow more efficiently and abundantly to vital body systems.

Tongue connection refers to placement of the tongue to one of the three energy points on the roof of the mouth to create more of a powerful experience through your practice.

According to Return to Kemet these principles pay homage to the Ancient Egyptian origin of Kemet Yoga by forming a practice that aligns our bodies as pyramids, but it also serves an even deeper purpose.

What Are the Benefits of Kemetic Yoga?

The purpose is to represent pyramidal energy and sacred geometry through the Kemetic yoga postures.

The goal of Kemetic Yoga is to allow nutrient and oxygen supply to flow more efficiently and abundantly to vital body systems.

Kemetic Yoga is based on the belief that by cultivating nature’s application of geometry and physics into yogic forms, we can access higher consciousness and awaken divine spiritual wisdom.

So, there you have it! Everything you need to know about Kemetic Yoga and where to find more information on the practice.

This practice is supportive for all who wish to explore deeper into the roots of yoga. It is also incredibly warming to the souls of African Americans searching for roots and belonging to our own history and homage.

Kemetic Yoga honors our lineage, our culture, and allows us to reclaim bits and pieces of information that was stolen from us.

Allow this to be a reminder to keep searching for answers. To stay steadfast in aligning with our true heritage versus idolizing the imagery that was forced upon us. Continue to thrive and know you are derived from Kings and Queens.