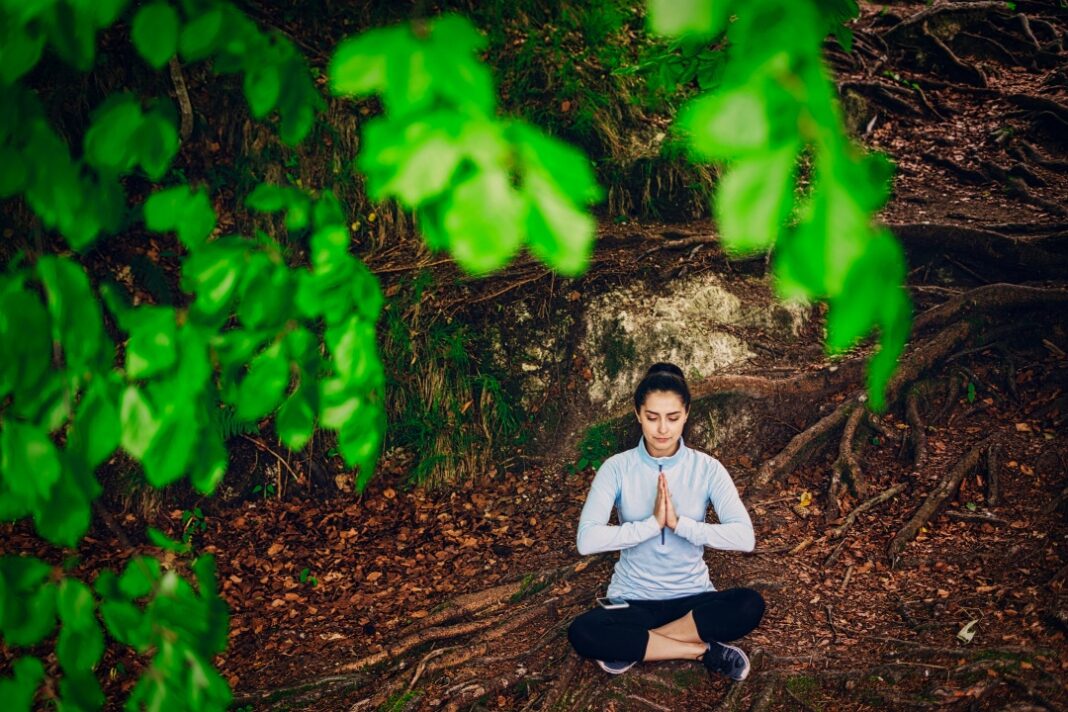 Hinduism, Buddhism, Sikhism, Jainism, and yoga philosophy all share common beliefs around the concept of self-realization and enlightenment. The possibility of freedom, liberation, and emancipation from the bondage of suffering, attachment, and ignorance are the guiding principles of these spiritual paths. While the philosophical concepts of Moksha, Maya, Karma, and Samsara can be difficult to understand, they are necessary for yogis to learn and study if they wish to move along the path of enlightenment. Even if your goal is not self-realization, the spiritual practices originating from these philosophies can reduce suffering and increase inner-peace, contentment, and joy. Every step that we take towards a state of moksha can bring us more peace, joy, and happiness in our lives.

Moksha or mukti, is a central concept of Indian philosophy. Moksha translates from Sanskrit as “liberation, freedom, emancipation or bliss.” It is a state of non-ego, where the ahamkara or “I-maker” vanishes and one stands free from all desires, actions, and consequences in a total state of oneness or absorption.

Attachment, desire, and the inability to see or experience the oneness of all life bind us to this material world. The ancient yogis view this bondage as the primary source of suffering in human life. Moksha is the path of liberation from suffering and the attainment of self-realization. Through this path of liberation, one can experience transcendental planes of existence and a profound state of bliss.

The liberation of Moksha is not a place; it does not exist in the heavens, the earth, or the spirit-world. This state of ultimate freedom has no space, no time, no location; it can only exist in the now, in the present moment. Moksha is not a destination, it is a process that begins when one becomes aware of their true nature.

Moksha is the ultimate goal of yoga practice. When we practice yoga, we’re practicing to free ourselves from the bonds of our own ego. We’re learning to let go of what we think we know, and instead, we’re cultivating a greater sense of who we really are.

Moksha is a state of spiritual liberation. It’s not about becoming perfect; it’s about being free. Moksha means freedom from the cycle of birth and death. It’s a state of pure consciousness where there is no separation between self and the divine.

Hindus believe in a cycle of birth and death called samsara, in where the next incarnation of one’s life is dependent upon the karma, or actions taken in previous lives. They believe the soul reincarnates over and over again until it has achieved moksha, or liberation. This concept of reincarnation has been around since ancient times, and is part of the beliefs of Buddhism, Jainism, and Sikhism.

These traditions describe Samsara as a cyclical prison of suffering. It’s a state of being where we have no choice but to experience pain, sorrow, and frustration. Yet we do have the opportunity to choose how we respond to those experiences. If we don’t choose wisely, we accumulate more bad karma, which will trap us in this cycle of suffering.

While good karma, spiritual practice, and devotion to the divine can help liberate us from the cycles of rebirth, ultimately, we must work towards achieving moksha. In order to achieve this state of liberation, we need to purify our minds through meditation and contemplation. Moksha is the primary pathway to break free of the endless cycle of samsara and attain freedom and liberation.

Maya translates from Sanskrit as “illusion or ignorance.” Maya is our memories, conceptions, judgments, and biases that present a distorted sense of reality. This is seen as both the psychological separation between the ego and the universe and the psychological filter that colors all of our experience. These impressions of past experiences become superimposed or projected on current experiences, creating a false reality. Maya reinforces the ego, strengthens attachment, and defines our individual “story” that defines who we are and our relationship to the external world. Maya is often viewed as the sum total of all of our karma and samsaras.

Essential to the concept of Moksha and Maya is the yogi’s understanding of Atman and Brahman. Brahman is the supreme being, the entirety of all there is in this existence. Brahman is described as the universal principle, supreme existence, or absolute reality. Atman is a tiny speck of Brahman existing at the center or core of our being. Atman is described as a soul, inner self, or spirit. Brahman and Atman are the exact same thing and seeing them as separate is the core of the illusion of maya.

Moksha is achieved when a yogi sheds the veil of maya and solely identifies with either Atman or Brahman. This results in understanding our true reality and experiencing Atman and Brahman everywhere—both inside and outside of us.

Rebirth, suffering, and the cycle of death

Moksha is one of four aims in human life, known in Indian philosophy as Purusartha. The other three purusharthas are artha (wealth/prosperity), kama (desirability/pleasure), and dharma (righteous conduct/morality). These four purusarthas are considered essential to experience happiness and fulfillment in life. They are also the means by which we progress spiritually and fulfill their purpose of living.

It is believed that as individuals progress through these three goals, their attachments to worldly possessions and desires gradually decrease until they are able to achieve moksha. In the Bhagavad-Gita, Krishna explains that one must pursue virtue while simultaneously avoiding attachment to material goods. He also states that one should avoid attachment to pleasure because it will only lead to suffering.

Both the ancient yogis and the Buddhists point to the kleshas, the five poisons or afflictions, as the cause of our suffering. These negative thought patterns distort our minds and our perceptions affecting how we think, act, and feel. They create an imbalance within us causing us to seek happiness in external objects instead of internal peace. According to the teachings of Patanjali, the first step towards achieving moksha is to purify oneself of the five kleshas, the root causes of suffering.

You are more likely to have encountered the word nirvana than moksha in Western culture, but both words are used interchangeably and in general terms, considered equivalent to each other. Within the many schools of Hinduism, Buddhism, Jainism, and yoga, moksha and nirvana do have subtle differences and describe slightly different states of consciousness. Therefore, yoga practitioners should avoid using Nirvana and instead use Moksha when referring to their own personal experience and spiritual practice.

How does one achieve moksha?

To achieve moksha, Maya must be cast off, anava (ego) must be dissolved, and both our attachments to pleasure and our aversions to discomfort must be severed. The five kleshas or negative mental patterns must be removed. The yogic virtues of faith (sraddha), vigor (virya), friendship (maitri), compassion (karuna), joy (mudita), equanimity (upekshanam), and wisdom (prajna) must be cultivated. Committing to the yogic vows of the yamas and niyamas will be necessary as a foundation for all of this spiritual work.

Moksha arises spontaneously when we become completely absorbed in the sensation of an experience without thought. This “taste” of total absorption is common yet fleeting. Through the practice of yoga, we seek to create the tools to consciously and willfully “pierce the veil” of Maya and see the transcendent nature of reality. These tools include selfless work (karma yoga), self-dissolving love (bhakti yoga), absolute discernment (jnana yoga), and meditative immersion (raja yoga).

The goal of moksha is most easily achieved through the process of jnana (knowledge) and bhakti (devotion). Through knowledge, we come to know ourselves and gain insight into the nature of reality. We then develop an intimate connection with God through love and devotion. With this connection, we are able to transcend the limitations of Maya and realize the truth about our own identity and the nature of reality.

The most fundamental tool yoga gives us to achieve moksha is conscious awareness. Through the use of awareness, we can slowly begin to see our projections, desires, attachments, and judgments for what they are. Once these distorting factors become conscious, they are able to dissolve and unblock the way to a direct experience of reality. When we become liberated from the illusionary world of maya, we are able to be in yoga: the union of the inner self (Atman) with the oneness of all life (Brahman).

The two stages of moksha

The first stage of moksha is where you experience a neutral and detached attitude towards problems and miseries. You’re able to remain unperturbed when faced with difficulties. When you’re experiencing pain, you don’t feel overwhelmed by it; you simply accept it as part of life. This acceptance allows you to let go of your attachment to things, which leads to freedom from suffering.

In the jivanmukti stage, you also begin to see the world as it truly is. You realize that everything has its purpose, and you no longer cling to anything. You become free from desire and greed, and you have compassion for everyone who suffers.

A jivanmukta has achieved a deep realization of her true self and understanding of the nature of the Universe. The liberated sage fully knows that he is not the body, nor does he identify with the mind. She also realizes that his experience of life is merely an illusion. In fact, he is free from the kleshas (afflictions) because he has realized the true nature of reality.

Swami Sivananda explains that a yogi in this stage “has now separated himself from the mind. He now stands as a spectator or witness of the mind.”

At the end of their lives, jivanmuktas achieve paramukti (final liberation). She is no longer bound by the eternal cycle of birth and death and therefore is free from the cycle of samsara. In videhamukti, the world entirely vanishes and is replaced by an experience of pure consciousness and the realization of supreme bliss. In the Bhagavad Gita, Lord Krishna Says that when one achieves this state, they enter into a realm called moksha loka (liberation land). This is where the soul lives eternally, without any physical form. It has no gender identity, no sense of time, and no desire to return to the material plane.

We don’t need to wait until we die to achieve freedom from desire. We can start right now by cultivating mindfulness and self-awareness. When we practice meditation regularly, we begin to see what we want, what we don’t want, and how we feel about those desires. We become aware of our thoughts and emotions, and we can choose to let go of them. We can stop wanting things that aren’t good for us, and we can stop craving things that will harm us. We can also notice when we’re feeling happy, sad, angry, jealous, fearful, etc., and we can decide whether we want to act upon those feelings. If we do, we can make choices that lead us toward happiness. If we don’t, we can make choices to avoid pain.