All About Terpenes and Their Health Benefits 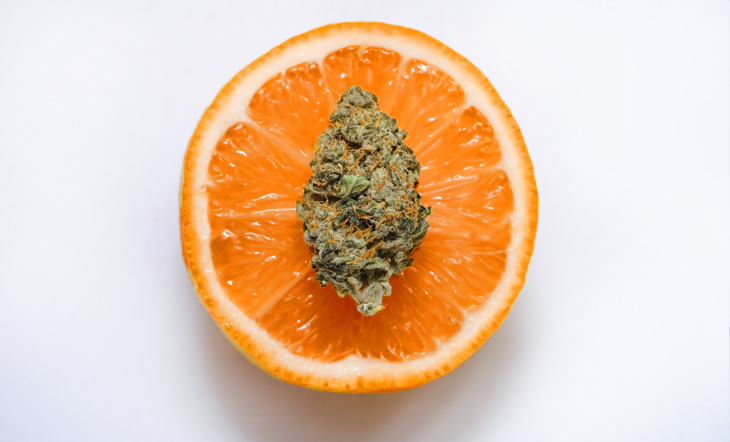 Have you ever wondered where cannabis gets its smell from? When it comes to the inherent skunkiness of weed, this infamous aroma is due to a surprising compound found in other plants like oranges and lavender: terpenes.

Read on to learn all about terpenes – the surprising thing marijuana, oranges and lavender have in common.

Cannabis is definitely one of those plants often smelt before seen. The innate skunky aroma is unforgettable. Yet, if you’ve taken a fresh bud between your fingers, given it a pinch, and taken a whiff, you know the aroma is much more complex than one could traditionally label as skunk.

One strain of cannabis can smell very different from another. And what impacts the aroma and even flavor of cannabis comes down to something called terpenes.

Confused About Cannabis? We Break Down Marijuana, Hemp, THC and CBD

Terpenes are found in various plants, including those of the citrus variety and the lovely lavender that helps with stress. Interestingly, they are the surprising thread between marijuana, oranges and lavender.

Terpenes or terpenoids are volatile, aromatic compounds made by plants and are responsible for specific aromas and flavors.

The sweet smell of lavender, the tangy taste of citrus, and the spiciness of black pepper are all related to terpenes. And of course, terpenes are also responsible for the complex and varying aromas and flavors of cannabis.

Plants ultimately make terpenes to aid in their own survival. A terpene’s job is to either repel or attract.

A plant will make certain terpenes as a way to protect itself from both predators and pests. And on the flip side, plants make terpenes to aid in attracting others for a symbiotic relationship.

For example, a plant may flower and release certain terpenes to attract bees for pollination. Or it may release a scent that repels certain predators. In fact, according to an article on finestlabs.com, some terpenes have displayed toxicity to herbivores. Talk about plant protection.

There are over 30,000 terpenes found in the plant world. And terpenes are classified based on their molecular composition. The different types of terpenes include:

Terpenes are classified based on how many isoprene units they contain.

They also interact with the human body, making them bioactive. This bioactivity may lead to health benefits for humans. Benefits of this unique aromatic compound include:

There’s so much more to say about essential oils, but for now, simply remember the concentrated oil you’re using comes from terpenes.

FINALLY! A Fact-Based Guide to Essential Oils: Expert Jennifer Pansa Shares Everything You Need to Know

Though there are many terpenes, again more than 30,000, the most common ones include myrcene, pinene, β-caryophyllene, Linalool and Limonene.

Let’s take a deeper dive into each one.

Myrcene is commonly found in cannabis, hops and bay, though it can also be found in citrus items and lemongrass. It has a pleasant scent and can be described as earthy and hoppy.

According to an article on Pubmed, myrcene contains analgesic, sedative, antidiabetic, antioxidant, anti-inflammatory, antibacterial and anticancer properties. Regarding cannabis, higher levels of myrcene in a strain may cause more sedating or “couch-lock” effects.

Cannabis and Spirituality: How to Expand Your Consciousness With This Plant Medicine

Pinene is another terpene found in cannabis, rosemary, pine trees and basil. It has a woodsy smell reminiscent of a pine forest or Christmas tree. Health benefits of pinene include having anti-tumor, antimicrobial, antioxidant and anti-inflammatory inflammatory properties.

Pinene is noted to be the most abundant terpene and is reported to have soothing and uplifting effects as well.

B-Caryophyllene is characterized by its peppery, spicy aroma. It’s the only known terpene to also interact with the CB2 receptors in the endocannabinoid system. This compound gives black pepper its spicy kick and is also found in cloves, cannabis, rosemary and copaiba.

This terpene is unique as it’s a sesquiterpene and phyto-cannabinoid. It’s also been approved by the FDA and deemed GRAS – or generally recognized as safe – when it comes to dietary purposes.

Health benefits of this unique compound include being antioxidant, anti-inflammatory, anticancer, cardioprotective, gastroprotective, nephroprotective and antimicrobial.

Linalool has a floral fragrance and is commonly found in lavender. It is widely known for having calming effects.

Limonene is responsible for the aroma and flavor of citrus plants. Health benefits of this compound are said to include aiding depression while also killing both bacteria and fungus.

And as a side note, two fun facts about terpenes are:

Curcumin, which is found in turmeric and linked to a wide range of health benefits, is also a terpene.

And amber, commonly found in crystal shops and favored by Jurassic Park fans, is actually hardened tree resin. This tree resin was once composed of many things, including terpenes. This resin or natural liquid bandaid turns into amber when hardened through a process called amberization.

All About Terpenes and Cannabis

Cannabis stores terpenes in its trichomes, those little bubble-filled sacs that can range from cloudy to golden. This is also where the cannabinoids, like THC and CBD are housed.

Regarding terpenes in cannabis, an article on Chemical & Engineering News reports:

Though research is conflicting, it’s long thought this special compound plays a role in what’s known as the Entourage Effect when it comes to cannabis.

The Entourage Effect is a theory about cannabis and its constituents. This theory hypothesizes that all cannabis compounds act best when together, thus providing the highest possible health expression.

Research on the Entourage Effect is ongoing, and whether or not this effect is real is up for debate. However, it’s an important consideration to make when using cannabis, specifically choosing between a full-spectrum or isolated product.

There’s so much to say about terpenes. And with research continuing, there’ll be even more to say in the upcoming years. Essential oils continue to be popular and not only for health and wellness, but also for cleaning and general household care – like pest reduction.

85 Ways to Use Essential Oils That Might Surprise You

As the cannabis industry continues to boom, we will be seeing and learning more about these special compounds called terpenes.