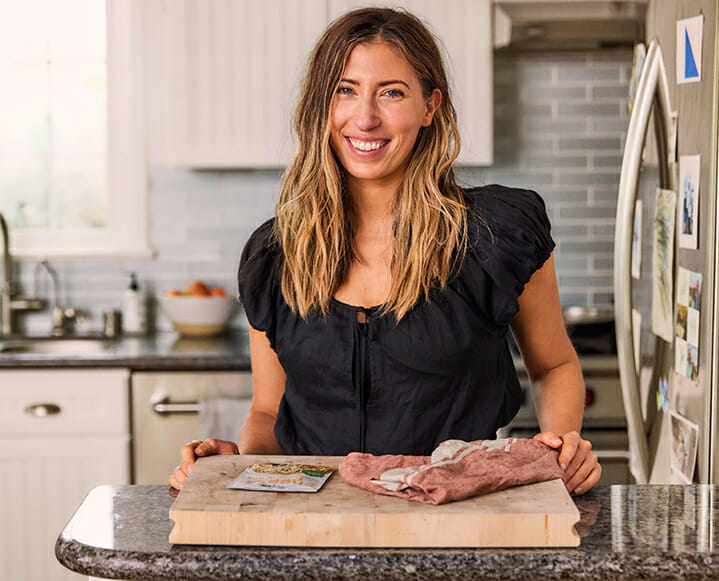 Let’s be clear:learning to eat for optimal health is not the same thing as “diet culture”.

Let’s embrace the dismantling of our culture’s unhealthy fixation with overly restrictive diets, while still celebrating the pursuit of sustained energy, mental clarity, and disease prevention through food.

So many of us have a complex relationship with food these days, but navigating those complexities can be made easier with a little support.

We’re huge fans of Shira Barlow, MS, RD, also known as The Food Therapist. Shira’s popular book, The Food Therapist: Break Bad Habits, Eat with Intention, and Indulge Without Worry was a hit with the goop set and lays out Shira’s easy-to-digest philosophy from cover to cover.

Just announced, Shira is bringing her take on intentional eating to a daily podcast with Dear Media. The new show, Good Instincts, will serve up snack-sized snippets of advice for her devoted following, including interviews, trend reports and Q+A’s like the one below!

Q: there are so many decadent treats at home that I wouldn’t normally have. How do I deal?

Shira: I’d like to share a story about a client of mine from a couple years ago. He was a very fancy food guy and he could not stop eating his kids’ stale Halloween candy…think waxy tootsie rolls. He would eat a bunch of them after his family was asleep, and then immediately feel bummed because they weren’t even worth it to him. There were a number of factors at play for him, but a big part of the issue was that the pile of candy was just there.

The way you think about and interact with decadent treats really matters. If you’re consuming them out of habit with little enjoyment, then really consider if they are worth keeping around. On the other hand,  if you’re savoring them like the special seasonal treats that they are, that’s always something I’m here for!

Q: I want to enjoy myself this holiday season, but also don’t want to feel like crap. How do I manage?

Shira: Our mindset around indulging is the most important thing here. A lot of people make the mistake of bringing wonky logic and ethics into the equation to rationalize indulging. My clients often use language that signal loopholes and moral licensing. I often hear things like, “This doesn’t count, it’s the holidays.” or “I’ve been so good, I deserve this!” The issue here isn’t the indulgence itself, it’s that it’s not rooted in reality or being done consciously.

A big misconception about health is that it is always about forgoing the indulgence (it’s not). It’s about having the ability to pause and consider if having the [insert your favorite treat] is really worth it to you. If it is, put whatever it is on a plate, and enjoy the absolute #$%& out of every morsel, slowly.

Of course, depending on your goals, you have to be willing to forgo some of those right-now wants some of the time. But the point is, indulgences have a place in a healthy life too. Allowing for them with self-compassion actually helps stop the indulge-repent-repeat cycle. Allowing ourselves some grace gets us back to balance more swiftly.

Q: How can I deal with social pressure at holiday functions, especially for drinking more alcohol?

Shira: One of the things I don’t see talked about much online, but is discussed frequently in my sessions, is the role social pressure plays when it comes to what we choose to eat (and drink). This pressure often comes from well-meaning friends, family and loved ones! For example, it could be the pressure to split dessert or the fear of disappointing a host by declining something you’d rather skip.

In these situations, I feel strongly that being clear is being kind, and I mean that in two ways. Being clear is kind to ourselves because we’re being intentional about what we actually want and honoring that. And, ultimately, being clear is also a kindnessto others. It’s not that different from the way I try to communicate with my 4 year old when I’m telling him no: it’s warm, but firm. A warm, but firm and honest response can go a long way. This is how we approach boundaries in any healthy relationship. You got this!

Read Next: The Crudites Trick: How To Tell If You’re Hungry Or Just Bored

Based on a True Story Cast and Release Date | Peacock