Why You Shouldn’t Make Your Child Hug Other People 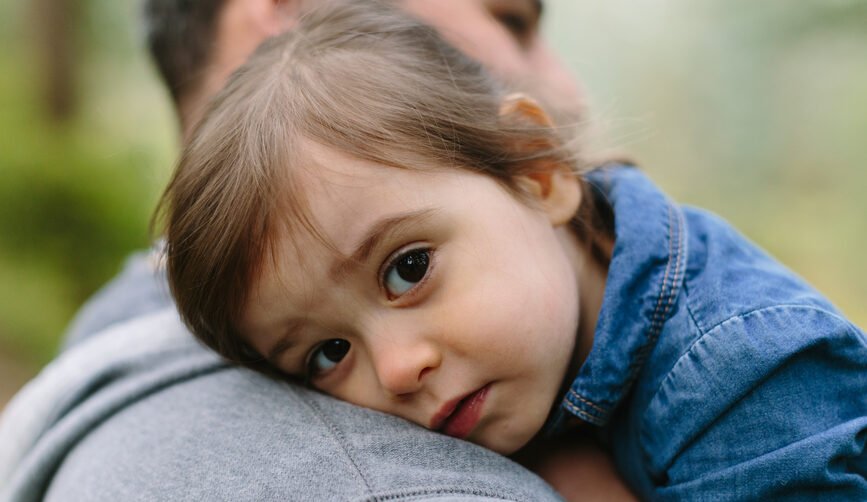 Decades ago, famous family therapist Virginia Satir once said that humans need four hugs a day for survival, eight hugs a day for maintenance, and twelve hugs a day for growth. After having to abstain from them for the better part of two years thanks to the COVID-19 pandemic, we’re inclined to agree.

Apart from the psychological benefits, a great hug has the power to reduce cortisol levels, improve our immune systems, and boost oxytocin naturally. Having lived without them for an extended period of time—and with the December holiday season in full swing—many of us find ourselves more eager than ever to get a good squeeze in from those we’ve missed most.

While relatives might be itching for an embrace from your little ones this holiday season, therapists warn against forcing your kids to hug them in return— regardless of familial relation or good intention—because of the surprising negative impact it can have on kids.

The importance of boundaries and intuition for kids

It’s difficult to consider that someone you know and love could hurt your child, but the reality is it’s more common than you might think. Suzy Gange, LPC-S, licensed counselor and director of clinical services and education for Children’s Advocacy Center for North Texas, has worked with victims of child abuse for over 25 years. She says that the bulk of her work involves victims whose abuse was at the hands of trusted family members. These offenders are often unassuming to parents because of the implicit trust already established between the parent and the abuser.

“It’s not the stranger down the street,” says Gange. “The scary thing is that I’ve been doing this since 1995, and my kids are older now, but this could have happened to me. We don’t put people around our children that we think could hurt them.” Yet statistics show that 93 percent of child abuse perpetrators are known to the victim; 34 percent are family members.

One of the most important ways to help protect kids from abuse is to teach kids about physical boundaries, according to sexual violence advocacy group RAINN. Specifically, that no one has the right to touch them or make them feel uncomfortable—even people who they know and love.

“One of the goals that we want to teach our kids, especially for safety and boundaries, is how to have their own boundaries and how to say no, especially when it comes to their own body.” —Suzy Gange, LPC-S, director of clinical services and education, Children’s Advocacy Center for North Texas

According to Gange, allowing children to say no to hugs and other kinds of physical touch can help them establish physical boundaries and boost self-confidence in the process. “One of the goals that we want to teach our kids, especially for safety and boundaries, is how to have their own boundaries and how to say no, especially when it comes to their own body,” says Gange. “What we’re doing is giving them confidence so that they can handle and manage things on their own.”

Supporting your child when they say no, Gange adds, also sends a powerful message to the adults in your child’s life. This kind of explicit support shows other adults that you’ve got your kid’s back (so to speak). It also shows your child that you support them and their boundaries—which helps them trust you.

Being empowered to act on their instinct—that gut feeling that certain touch makes them uncomfortable—also helps develop a child’s intuition, which can protect them in unsafe situations, says Canadian trauma therapist Shannon Moroney, RSW. Essentially, if a child feels that something is dangerous or wrong, a well-developed intuition can help them stay safe or seek help from a trusted adult. But consistent forced contact (like hugs) can “erode [a child’s] intuition, or their ability to trust their intuition,” Moroney says. “We want our kids to have a ‘spidey sense’ of when something just doesn’t feel right in your gut.”

Forcing kids to hug family members, despite their negative gut feelings, can send a harmful message about authority figures, Gange adds. Children trust adults to protect them and act in their best interest. So when those trusted adults push them to do things that don’t “feel right”—say, force them to hug someone they don’t want to— they begin to think that this level of discomfort is normal.

Body safety skills, according to the American Academy of Pediatrics (AAP), include knowing what “good” and “bad” touches are, not forcing hugs and other forms of physical affection, and understanding appropriate language for body parts.

Some kids might not always love hugs—and that’s okay, too

Beyond the very real safety concerns, it’s also important to remember that children are emotionally complex individuals, just like adults. Just as our moods and desires can change in an instant, theirs can, too. A stressful day of holiday travel can cause adults and children alike to feel exhausted, upset, and even withdrawn—and not at all in the mood for a hug. While relatives may want (or even expect) a hug immediately, a grace period after arrival just might be in order, says Moroney.

Like adults, kids also have different personalities and temperaments that impact their desire for hugs, kisses, and other forms of healthy physical and social contact. Just as some adults aren’t naturally big huggers, some kids aren’t either. Some kids—particularly those with autism spectrum disorder—might also be overstimulated by touch or physical affection. And that’s okay.

Hugging isn’t the only way to show affection

Saying no to physical affection is easier said than done, especially when it involves an innocent hug from a doting grandma. But it’s important to help your kids set boundaries with what makes them uncomfortable, and uphold them around family members.

Parents can support their children during these awkward encounters by offering some greeting alternatives (fist bumps, high fives, side hugs) and politely affirming their child’s decline. “I’m a huge proponent of ‘I’ statements,” says Gange. Some examples she gives:  “I’m okay if Susie chooses not to hug you right now,” or “I’m teaching her that she’s able to say no. She’s not trying to hurt your feelings.”

“We want kids to have physical touch. We just want them, as for ourselves, to be able to choose it.” —Shannon Moroney, RSW

Moroney also encourages asking family members to consider their phrasing when asking for a reunion hug. Asking a question opens up the opportunity for a direct answer rather than a guilt-driven embrace. Rather than say “Come give me a hug,” for example, try saying “I’ve missed you— can I give you a hug?” Think invitation rather than command.

Apart from physical affection, holidays and family gatherings hold opportunities for other forms of connection between family members. Storytelling, playing games, and looking through old family photos are all ways to strengthen family bonds without touch.

It’s important to note that the power of physical affection shouldn’t be discounted. A welcomed hug from loved ones can comfort, reassure, and even energize. A forced hug is similarly powerful, but in negative ways. At the end of the day, Moroney says, providing children with the ability to choose who and when they hug can result in more genuine displays of unprompted affection.

“We want kids to have physical touch,” says Moroney. “Kids are cuddly— they need it, it’s what we all need. We just want them, as for ourselves, to be able to choose it.”

Strengthen Your Foot Core With These 3 Moves