This Coffee Skillet Monkey Bread Recipe Is So Cozy 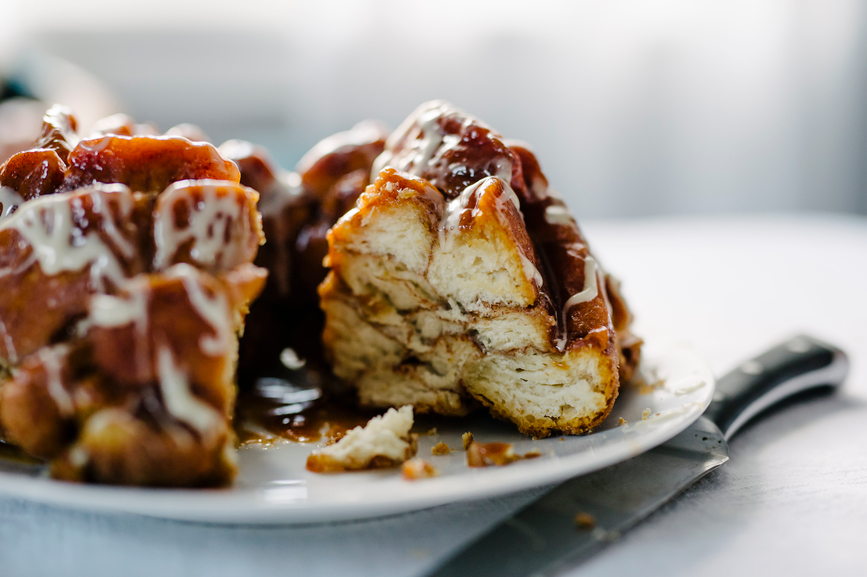 When it comes to dessert, and namely dessert that doubles as breakfast, is there anything better than a cinnamon sugar pastry? Turns out the answer is yes, particularly when said dessert is high in protein (read: a legit, healthy enough way to start your day right) and packs the delectable taste of coffee in each and every bite. We know we may be biased in this affirmation—after all, it’s not the first time we’ve professed our love for cinnamon sugar treats or coffee—but we have a sneaking suspicion that your mouth is about to water just like ours…

With that said, we’re pleased to introduce you to this coffee skillet monkey bread recipe by Kiley O’Donnell, aka @wellmadebykiley, who specializes in whipping up health-focused desserts. Keep reading to see why this monkey bread gets our stamp of approval before discovering how to make it yourself.

Why we love this coffee skillet monkey bread recipe

Cinnamon. Glazed. Dessert for breakfast. We’re tempted to leave the benefits of this recipe with these few words only. However, we’re operating in the wellness world after all, so let’s take a quick gander at how and why this monkey bread checks out from a nutritional standpoint.

To start, this monkey bread recipe packs protein, carbs, and fat, making it a balanced yet still sweet treat for breakfast. As far as the first macro goes, Greek yogurt is the star of the show. According to the USDA, eight ounces of regular Greek yogurt (which this recipe calls for) can offer up to 23 grams of protein—not to mention satiating healthy fats and carbs, as well as gut-friendly probiotics—depending on the variety you choose. While making sure you get adequate protein throughout the day is key, experts routinely suggest loading up on it for breakfast in particular. As Erin Palinski-Wade, RD, CDE previously told Well+Good, “Starting off your day with a protein-rich breakfast may have the biggest impact, since it can help to stabilize blood sugar levels all day long—meaning more consistent energy.”

From there, a few other ingredients of note are:

Last but not least, for the maple coffee glaze, O’Donnell suggests using Oat Haus Coffee Granola Butter. It not only mimics the flavor of an oat milk latte, but also offers nutritional perks. Her recipe calls for a quarter cup of the vegan, gluten-free granola butter, which adds four grams of protein and fiber to the mix. If you don’t have this specific option on hand, don’t fret; simply sub in two tablespoons of freshly brewed, antioxidant-rich coffee to round out the flavor profile, delight your taste buds, and enjoy a small kick of caffeine.

Alas, here’s how to inch closer to your own slice (or two) of heaven in the form of coffee-flavored monkey bread.

1. Preheat oven to 375°F. Butter a medium skillet or baking dish; set aside.

2. In a medium bowl, combine the flour, Greek yogurt, and baking soda. Mix together until a dough forms (you may need to use your hands to fully incorporate).

3. In a separate small bowl, mix together the coconut sugar and cinnamon for the cinnamon sugar coating.

4. Scoop the dough out (about two tablespoons per ball) and use your hands to roll into a round shape. Roll around the ball in the cinnamon sugar coating, making sure to completely cover the surface. Repeat until the dough is gone.

5. Place the dough balls into the prepared skillet or baking dish.

6. In a small bowl, whisk together the melted coconut oil, maple syrup, and granola butter. Drizzle the maple coffee glaze mixture over the dough balls in the skillet or baking dish. Bake for 20-22 minutes.

7. While baking, beat together the ingredients for the cinnamon cream cheese topping.

8. Remove the monkey bread from the oven, allow to cool for 10 minutes, and then top with the cream cheese topping. Enjoy!

How To Overcome Your Fear of Heights