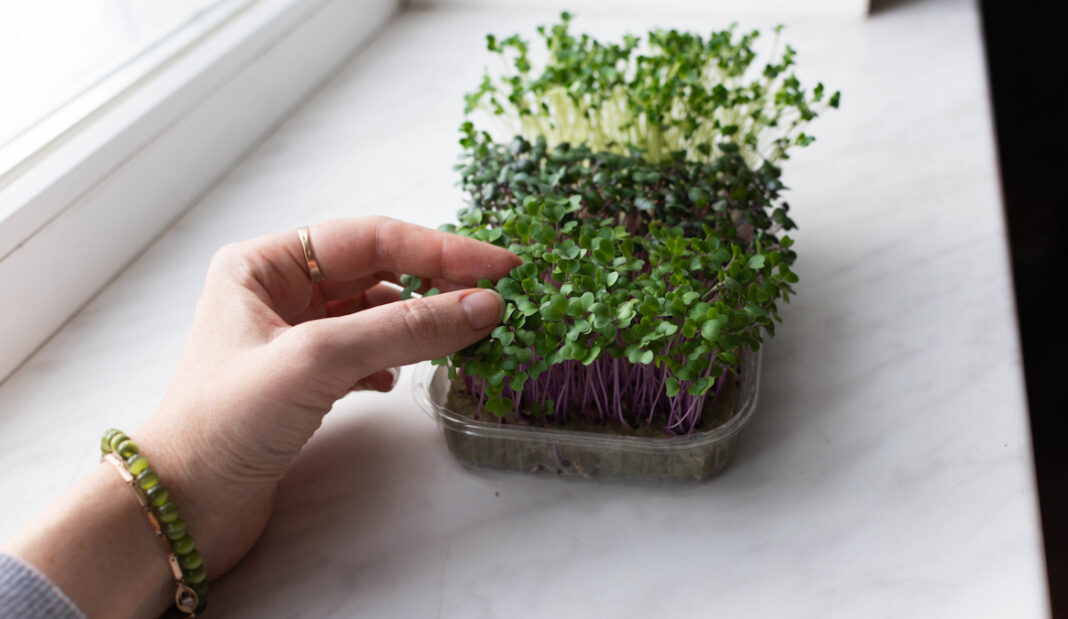 Remember when everyone was getting really into plants? Like, at the beginning of the pandemic when everyone’s new-found hobby was propagating pothos vines (along with baking bread, of course.) Well, I never did. Not because I didn’t want to, but because I have a black thumb.

I can’t even count how many houseplants I’ve killed (the last one I remember was named Mariah #5, and yes there were four “Mariahs” before that). Because of my complete lack of botanical skill, the thought of tending to my own vegetable garden like the aunts in Practical Magic would remain a fantasy. That is, until I discovered Ingarden ($160), an indoor hydroponic smart garden that grows organic, superfood microgreens in about a week. The system uses an energy-efficient light system and watering technology that allows you to grow microgreens without much management at all. (It also comes in a variety of pretty colors like mint, pink, black, and beige.) Clearly, that speaks to me.

Uh, what exactly are microgreens?

In the past couple of years, I’ve become a real microgreens nerd. Admittedly, I didn’t really have a good understanding of what they were at first, even though I did buy microgreens from Trader Joe’s from time to time. They’re often confused with sprouts (which are young greens grown from sprouted seeds) and while they’re both packed with nutrients, they’re actually different. “It’s easy to imagine microgreens as baby vegetable greens,” explains Ingarden co-founder and co-CEO, Mariana Ferreira. “They are usually harvested, meaning ready to eat, one to three weeks from when seeds are planted.”

According to Ferreira, microgreens contain up to 20 times more nutrient density than regular vegetables, so they can double as a nutritional supplement while also adding texture and flavor to foods. “Because they are recently sprouted greens, they contain more of the beneficial nutrients our bodies crave in ratio with other components,” she says. “For example, the amount of starch in a broccoli increases over time as it matures at a much faster rate than the amount of vitamin A, thus a micro broccoli has more density of these essential nutrients than the mature vegetable.”

I had learned about the nutritional power of microgreens from one of my favorite wellness podcasts, and began buying them more often, tossing them in salads or eating them with baby potatoes (aka my “potato salad”.) Before I knew it, though, I was buying my own hydroponic garden to grow my own.

Growing ‘greens with the Ingarden

I was a little nervous about using Ingarden (obviously because of what happened to the five Mariahs), but Ferreira made it sound so easy: “From a mom wanting to teach their 8-year-old how to grow something easily, to that millennial who’s apartment gets no direct light, Ingarden’s mess-free hydroponic system can help you grow greens anywhere, any time of year at some of the fastest rates,” she says. She assured me in as fast as 5-7 days, I’d have lil’ greens ready to eat. Also assuring—I didn’t have to pick just one veggie type. You can grow three different kinds of foods at the same time, such as arugula, kale, broccoli, bok choy, and more.

How to use the Ingarden

My kitchen is small and doesn’t have a lot of counter space, so I decided to let Ingarden do its thing in my living room, but away from any windows so it doesn’t get sunlight, which could mess up the growing process. After quickly setting up the frame and ceramic bowl together, I placed three seed pads (which were mustard, radish, and red cabbage greens) on the frame, filled the bowl with water, and set the light timer to be on for 12 hours and off for 12 more.

And that’s it! Because the bowl acts as a water bank, it’ll water the greens automatically via the wicks that transfer the water inside the bowl to the pads. The only mistake I made was that I set it up in the afternoon, so the lights were on when I was going to bed, which was slightly annoying because I could see them from bed and I like to sleep in pitch darkness like a vampire. (Ingarden recommends that you synchronize the Ingarden with your sleep cycle and start the timer in the morning when you wake up.) Over the next week, I began watching my microgreens grow. Glorious! After a week or so, I was able to harvest and enjoy my delicious greens.

If you’re wondering how to incorporate microgreens into your meals, good news: it’s easy as ever. “From simply adding them in a smoothie or garnishing a soup to making them the main flavor pop of a fancy avocado toast or steak, you choose to eat them in so many ways,” says Ferreira. Ingarden also released its first recipe ebook ($9) containing popular recipes you can try at home.

For my first harvest, I decided to make a bougie bagel using the mustard greens. Since then, I’ve made egg dishes, elaborate salads, and tossed microgreens over pasta. There’s something about the greens that instantly make a homemade meal look like a culinary masterpiece. Not only did it feel amazing to eat something fresh and nutritious that I grew in my own “garden,” but it also inspired me to get creative with my meals (and not order from Postmates, ahem). And I didn’t even need a green thumb after all.

Want to be the first to hear about the latest (and greatest) SHOP product drops, custom collections, discounts, and more? Sign up to have the intel delivered straight to your inbox. [form id=”shopping-list”