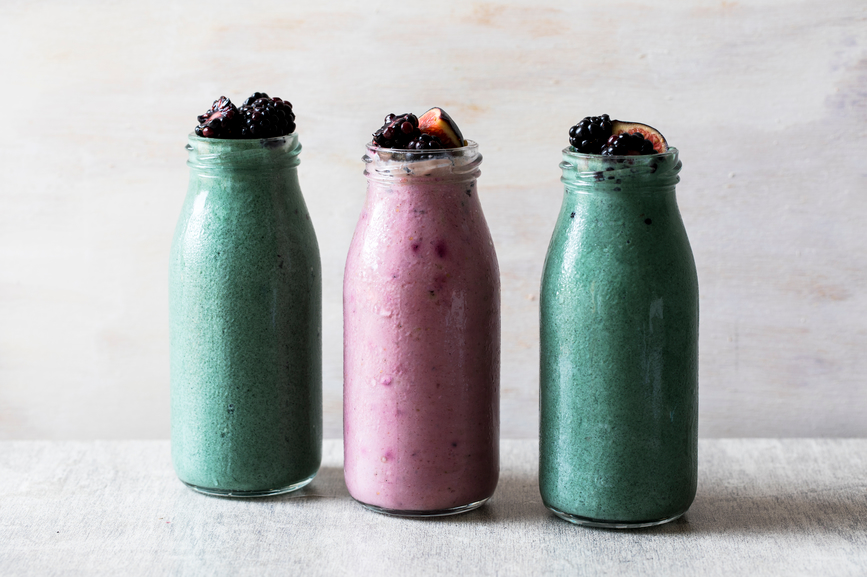 Fall is just weeks away, and that means cuddling up on the sofa with spooky movies playing on repeat for hours on end. Needless to say, the excitement gearing up for the Hocus Pocus sequel premiering at the end of September is already through the roof.

The best part, you may ask? The iconic steamy cauldron scene as the three sister witches throw in a little bit of this and a little bit of that to make their super secret potion from the magical spell book. Which, I’ll be honest, looks like me first thing in the morning as I throw in a blender a pinch of turmeric powder, a spoonful of yam, and a splash of coconut milk to make one of my favorite gut-healthy smoothies to start the day.

Of course, unlike the Sanderson sisters, my end *smoothie* goal isn’t to make a powerful life-sucking elixir that replenishes my own youth and vitality. However, making a refreshing, nutrient-filled drink is certainly a key objective. So, when using magic is out of the question and so are overpriced (ahem, 17-dollar smoothies at Erewhon, I said what I said), making them at home is your best bet. And if you haven’t been clued in on one of the best greens (not grown on land, that is) to add to your smoothie yet, spoiler alert: It’s sea moss.

Turns out that this marine plant that comes in all sorts of shades like green, red, brown, and yellow is filled with tons of health benefits registered dietitians are giving the sea, I mean seal, of approval. So, naturally, we’ve gathered some of the best sea moss smoothie recipes out there to really seas (sorry!) the day.

What makes a sea moss smoothie so great?

Smoothies are by far one of the easiest ways to sneak in some extra nutrient-rich foods. (Seriously, not even the pickiest of eaters will likely be alarmed by a sneaky prune or legume that’s made its way into your delicious smoothie concoction.) So it’s no surprise that sea moss has become one of the latest go-to smoothie additions everyone can’t seem to get enough of—after all, it’s chock-full of health benefits.

This five-ingredient ginger and mango smoothie recipe by That Girl Cooks Healthy features so many gut-loving ingredients: think mango, pineapple, ginger, coconut water, and sea moss. Though sea moss gel on its own might have an earthy flavor, the strong punchiness of ginger and sweetness from the mango will help meld all of the ingredients together for a delicious beverage. Plus, the mango is a natural probiotic that helps feed good bacteria in your gut and support a healthy and balanced microbiome.

Get the recipe: Ginger and Mango Sea Moss Smoothie

This strawberry smoothie recipe by TikToker @tayloralxandra tastes like sunshine and rainbows in a cup. Not to mention the fact that it’s packed with gut-healthy ingredients, like omega-3-rich flaxseeds, plant-based milk (yes, it’s vegan), cinnamon, and a few tablespoons of sea moss for added nutrients.

Although this may look like your normal, everyday berry smoothie, it’s loaded with a secret ingredient. Any guesses? Sea moss, of course. This five-ingredient blueberry smoothie recipe by Good Food Baddie features all your favorite smoothie go-to ingredients like almond milk, blueberries, and banana but packs a punch of nutrients thanks to just a few spoonfuls of the marine veg.

Although most types of sea moss aren’t green like the moss found on land, this green smoothie recipe by TikToker @chanteljroch certainly is a vibrant shade of the color, thanks to a heaping handful of spinach and creamy avocado. Have we mentioned our love for spinach, aka a leafy green filled with tons of heart-healthy benefits? *Insert heart emoji.*

@nebulanaturals been seeing the popular #coconutcloudsmoothie all over my feed, so of course I had to recreate it with sea moss💙 10/10 ⭐️ #seamosssmoothie #seamossgel #seamoss #bluemajik ♬ original sound – thepocketqueen

You likely have seen the viral coconut cloud smoothie recipe all over TikTok in the last few months. But if not, let us introduce you to this heavenly smoothie combination by TikToker @nebulanaturals, which features ingredients like coconut cream, blue spirulina, and sea moss that are all easy on the eyes. FYI: Though blue spirulina looks like an artificial food dye, it’s far from it and is actually an algae relative of sea moss (meaning it’s also loaded with tons of health benefits, vitamins, and minerals).

Julian Alaphilippe crashes out of Vuelta a España

Bojana Vasiljevic and Chris Minnes Share Why They Got into Promoting