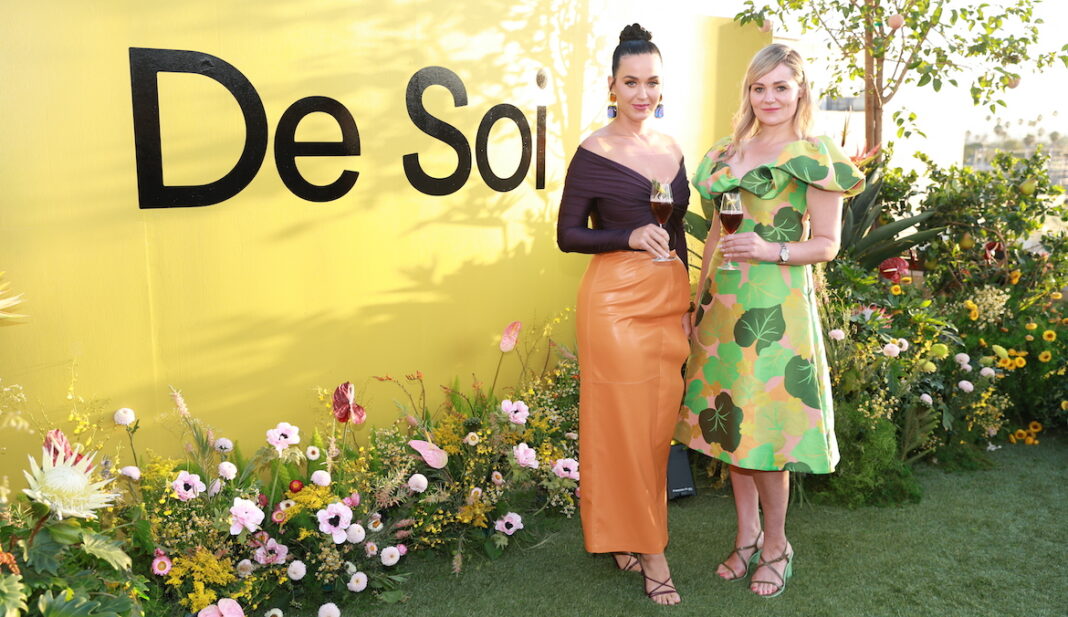 Katy Perry is a woman of intention. From her personal life and habits to her business opportunities, this is a woman who knows what she wants and is very meticulous about how that transpires. Sitting down at Heimat in Los Angeles, Perry admits that she had been approached to do a lot of drink lines—either to be the face of one or to create her own—but, she says, it “never felt right.” Even though she enjoys alcohol from time to time, she wanted to be a part of something she aligned with. It was meeting with Morgan McLachlan, the distiller at AMASS Gin, that set everything right. Both wanted to create an option outside of alcohol that still felt like a sensory experience—and something special.

After launching the non-alcoholic aperitif De Soi in January 2022, they recently raised $4 million in funding. The name, De Soi, comes from the philosophy of Jean-Jacques Rousseau, or as McLachlan says, this idea “of enjoying life, but also being in control,” aka pleasure with restraint. The line is made up of three flavors: Golden Hour (with notes of citrus), Purple Lune (with notes of blackberry and vanilla), and Champignon Dreams (with notes of strawberries and grapefruit).

All three elixirs also feature adaptogens, which are natural ingredients like reishi mushroom and ashwagandha, that are said to be helpful in working with your body and relieving stress and fatigue, among other things. (“I can be a little anxiety prone,” says Perry, who loves De Soi’s Purple Lune, made with ashwagandha, because it helps her relax.) Both McLachlan and Perry emphasize that the drinks can make you feel refreshed, calm, or loquacious without booze—something more consumers are wanting in today’s world.

“I think we’re just so much more aware [of wellness] in general,” says Perry, as we (including McLachlan) sip. “We’ve all been through a kind of a health situation. So there’s that consciousness and awareness of our bodies.”

Both Perry and McLachlan underscore this awareness and conscious drinking—and say that you don’t have to pick one or the other, necessarily.

“We’re both in our late thirties and we’re thriving and we’re the matriarchs and it’s a delicate balance,” says Perry with a laugh. “And so I like providing options to those matriarchs and beyond, whether that’s what you want all the time or for the Mondays through the Thursdays.”

“We’re both in our late thirties and we’re thriving and we’re the matriarchs and it’s a delicate balance,” laughs Perry.

“I didn’t [want to] feel cheated out of that sort of sensual moment [of having a drink out],” says McLachlan. “I want a nice drink to have at a party, and also to unwind with.”

Perry is also big on the unwinding factor. Besides her favorite De Soi drink that helps to calm her anxiety, she credits her 12-year practice of Transcendental Meditation (TM) to helping her improve her mood swings and rest easier. “You can do it for 20 minutes a day or in the morning and at night. And it feels like you’ve found two hours in a day,” she says. “It really reboots, and gives you your deepest rest.” A lesson in intention if I’ve ever heard one.