I Tried Eating Japanese Breakfast Inspired By This Blue Zone 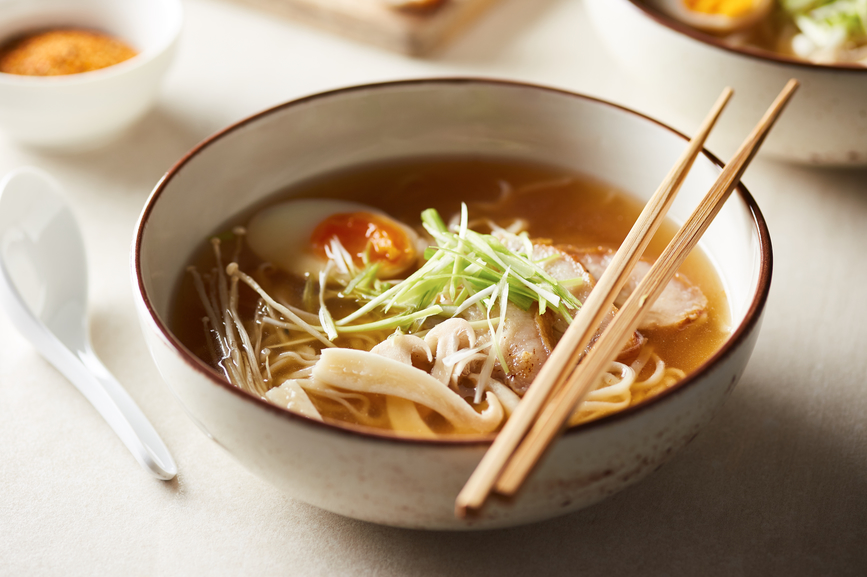 If you expect to order a sweet breakfast filled with cinnamon rolls and pancakes in Japan, you might be surprised to find that they’re not on most breakfast menus. That was my exact reaction the first time I visited Tokyo. As a young seven-year-old accustomed to eating Fruit Loops and syrup-slathered Eggos in the United States, I was shocked by our hotel’s spread of savory items.

There was warm miso soup, grilled fish, and pickled vegetables on small individual plates and bowls closely nestled together to fit on a large platter. As everyone around me delved right into the food without hesitation, I was puzzled. Why was no one else confused by the selection? Was it the time difference that had me out of sorts, and I had somehow slept through breakfast—which was most definitely quite possible—and made it to lunch?

Of course, the jet lag had me feeling some type of way, but it was, in fact, time for breakfast, aka my favorite meal of the day. With an immense amount of hunger mixed with exhaustion from the travel, I decided to spare my family the gazillion questions I had and give it a shot. After all, it did look and smell delicious. To my *pleasant* surprise, it was absolutely exquisite and a meal I still dream about to this day.

So, what exactly made this Japanese-style breakfast so special? According to Dan Buettner, a National Geographic reporter, longevity expert, and founder of the Blue Zones, what I ate was similar to the foods eaten in Okinawa (Japan’s southernmost prefecture), the island with some of the longest-living people in the world. Whoa, it tastes good, and it’s that good for you? I’m sold. To mimic Okinawans’ secret sauce for longevity, I decided to recreate some of the foods I ate for breakfast during my travels to Japan and see firsthand how I felt for a week. Here’s how it went.

What is Japanese breakfast, and what do Okinawans eat in the morning?

According to the Blue Zones, Okinawan centenarians eat mostly sweet potatoes (a whopping 67% of their diet), rice, vegetables, legumes, and a small amount of fish, meat, and poultry. The predominantly plant-based Okinawan diet is typically high in nutrients and low in calories. It features a lot of stir-fried vegetables, sweet potatoes (seriously, a lot of it), and tofu. “The Okinawa diet gets a lot of attention because the people who live on the island have a higher than average life expectancy at 100 years old, compared to the US at 78.8 years and the rest of Japan at 84 years old,” registered dietitian, Nora Minno, RD, previously told Well+Good.

When investigating Okinawan breakfast, I came across the Okinawa Daiichi Hotel, which serves various dishes that reminded me of the meal I enjoyed when I first visited Japan. In an article by Okinawa Clip, the hotel shared some of the traditional breakfast items eaten on the island, including bread made with purple yam and turmeric, marinated carrots and tomatoes, bitter greens, miso soup, fresh seaweed, fluffy tofu, and seasonal fruit. The meal was vibrant, colorful, primarily plant-based, and consisted of multiple courses made up of small portions of each food.

I ate a Japanese-style breakfast for a week, and here’s what happened

Although most Okinawan-style breakfast dishes might not be available to grab and go in most grocery stores in the United States, the pillars of eating similarly can be easily translated to just about anywhere. By focusing on incorporating more vegetables, gut-friendly fermented foods, and fruit, I successfully recreated a Japanese-style breakfast from my home in California.

I introduced more soy-based products into my diet

First, I cut out most of the overly sweet breakfast items like muffins, pancakes, and waffles from my meal prep routine and traded them in for more savory and simple foods. One of the main go-to sources of protein for Okinawans comes from soy, so I decided to incorporate more tofu, miso, and fermented soybeans into my diet. Nattō, which is a gooey, slimy, and fermented soybean dish, might be an acquired taste for many Americans, but it was one of my favorite dishes to eat in the morning over a bowl of steamed rice.

This probiotic-packed food is loaded with 31 grams of protein and nine grams of fiber per cup; it’s great for reducing inflammation and promoting gut health. On the days I didn’t eat this dish, I opted for a soothing bowl of warm miso soup filled with a wide range of B vitamins that helped keep me energized throughout the day.

I got loads of fiber from sweet potatoes

For a sweeter, filling, and fiber-filled treat, I added more sweet potatoes to my breakfast routine. To keep things super simple, I air-fried Japanese yams until soft and creamy in the center. As the natural sugars caramelized while cooking, the yams became tender and sweeter, which were great even on their own. Best of all, I saved any leftovers to throw into smoothies for an instantly creamier and richer consistency.

I ate grilled fish for breakfast

I traded in my coffee for green tea

Instead of the usual cup of joe, I swapped it for Japanese green tea packed with tons of health benefits like L-theanine, linked to improved attention and cognitive function.

For a little sweet treat, I added a side of fruits like berries and Japanese pear for a refreshing snack to help cleanse my palate and keep me hydrated and energized.

After just a few days of adapting my breakfast routine, my taste preferences began to shift. I’d expected to crave the sugary foods I typically ate in the mornings, but I found that I didn’t miss them all too much. Instead, the simple and varied meals helped improve my energy levels and bowel movements (yes, I became more regular than ever, thanks to all of the fiber). All around, I felt less sluggish and happier throughout the day.

Despite my initial apprehension about whether this shift would be more labor-intensive or require more meal preparation, I found that it was very straightforward and mainly relied on simple foods that weren’t overly processed. To make things easier, I cooked the fish and sweet potatoes in a larger batch at the start of the week and simply portioned out what I needed for each day, which made eating Japanese breakfast something I’ll do on the reg from now on.

Are You Getting Enough Vitamin D?