How To Take Pills Orally For Faster Absorption 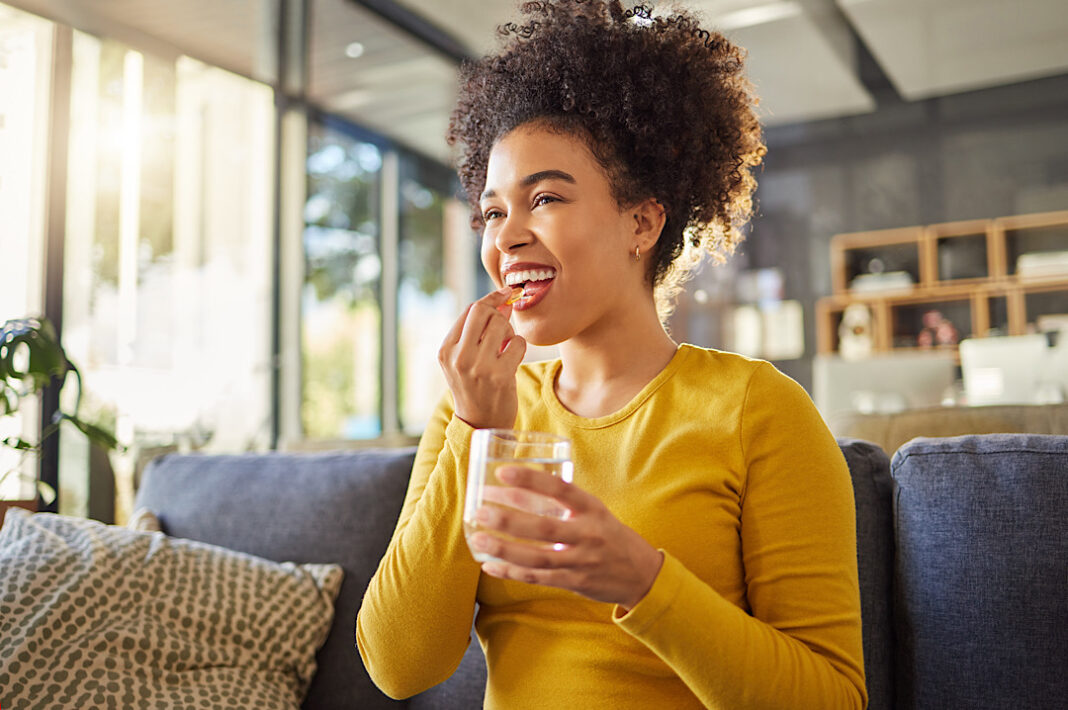 If you’re the type of person who strives to take their allergy meds at the best time of day for rapid relief, opts for liposomal vitamin capsules because they’re more bioavailable, and would love to make your melatonin supplement kick in a little quicker at night, you’re in luck. Researchers at Johns Hopkins University have new insights into how to take pills orally for faster absorption.

While most people consume pills sitting or standing up straight, it turns out that if you were to lean to your right, you could cut absorption time significantly and increase the amount of active ingredients that make it past your stomach (which is basically the bouncer of your gastrointestinal tract) by up to 83 percent.

According to Jung-Hee Seo, PhD, an author of the study and an assistant research professor in the Department of Mechanical Engineering at Johns Hopkins University, a slight right lean for five minutes sped up the rate at which pills dissolved in the stomach from 23 minutes to 10. The researchers only looked at rates for non-disintegrating pills (think: a chalky Tylenol pill) so rates could potentially be even faster for rapid-release tablets.

Why posture matters when taking pills

It seems wild that such a tiny tweak to your posture could have such a major effect on the absorption and accessibility of active ingredients in your system, but after speaking with Dr. Seo, the reason is clear: gravity. The human stomach  sits at a diagonal from left to right, so mimicking that posture with your body allows a pill to find its way to the base of your stomach more quickly. This is important for a couple of reasons, Dr. Seo explains.

“The contraction of the stomach is downward and acts as a jet,” he says. Liquid flow at the top (left side) of the stomach is much gentler, more like a lazy river, than it is as the bottom (right side), which looked more like white rapids in the simulation Dr. Seo shows me. Not only does the more torrential nature of the base of the stomach help to break down pills faster, it’s also closer in proximity to your intestines—where active ingredients need to get in order to be passed into your liver and eventually your bloodstream. Conversely, leaning in the left direction during the study extended absorption times to 100 minutes, since the pill stayed at the top of the stomach for longer.

But scientists have known about gravity since that apple allegedly fell on Sir Isaac Newton’s head, so why is it only in the year 2022 that people are making this connection between posture and pill absorption rates? Essentially, what we understand about this process comes from a model that doesn’t really mimic what the human stomach looks like, the effect gravity has on it, and the flow of liquid from the stomach to the large intestine, Dr. Seo says.

Currently, the dissolution tests used to measure absorption rates of pharmaceutical pills in the U.S. looks like a U-shaped tub with a rotating paddle in the middle, along with what looks like a blender blade at the bottom to oscillate the water. “Various studies have shown that this device does not represent the conditions and flow patterns of the real stomach,” Dr. Seo says.

Developing new tests that do mimic the stomach, however, is expensive, which is why Dr. Seo and his fellow researchers at Johns Hopkins used a simulation of a male human stomach for their study. When asked, Dr. Seo says he believes the findings would be similar for women and children, but that his team hopes to do further research looking at the influence of factors such as sex, age, and even stomach content in the future—their absorption rates are based on an empty stomach with just water.

Before you start leaning like the Tower of Pisa every time you take a pill, it’s worth noting when speeding up absorption rates is really helpful—and when it’s potentially only offering a placebo effect, something Mandy C. Leonard, PharmD, BCPS, senior director of Drug Use Policy and Formulary Management at Cleveland Clinic breaks down below.

There are two main reasons most people take pills, according to Dr. Leonard—chronic conditions and acute pain. And the majority of the time, it’s for the former. “For chronic conditions, the rate of absorption doesn’t matter because you’re taking it over a certain period of time,” Dr. Leonard says. “We’d call this steady state, meaning that the amount you’re taking in equals the amount that’s going out. So someone’s not going to be concerned that their Lipitor [cholesterol medication] is being absorbed in 10 minutes versus 30; it’s not going to make a difference.”

So any pills you take daily, including vitamins and supplements, aren’t worth doing your best Little Teapot impression. “But it may be helpful with acute pain, like a headache,” says Dr. Leonard, who adds that she sees no instance where leaning to the right while sitting or standing would be detrimental when taking oral medication, such as when taking extended-release tablets since they’re designed to eke out active ingredients slowly, regardless of where they sit in your stomach. “Some tablets have laser-drilled holes in the top of them that release the drug over a period of time,” Dr. Leonard says, “and some have these coatings that are supposed to be broken down over a period of time.”

You may also want to try this tip with antihistamine pills for your allergies. “Antihistamines take at least 30 minutes to work,” Purvi Parikh, MD, an allergist/immunologist with the Allergy & Asthma Network, previously told Well+Good. But you could presumably expedite the process by adjusting your posture.

Similarly, “if you can take your sleep medication, and it can be absorbed quicker, maybe you don’t need to plan to take it an hour before you go to bed,” Dr. Leonard says. Should a fast-track to quality zzzs sound dreamy to you, there’s more good news: The study also found that rolling to your right side after taking a pill could also significantly speed up absorption rates. Rolling to the left, on the other hand, could keep you up even longer counting sheep.

And one last tip: “Since some antihistamines make you drowsy, it’s actually best to take them before bedtime,” according to Dr. Parikh. Favoring your right side could be beneficial when taking them, too.

Why Is Everything Funnier When I’m Tired?