Here’s What You Should Know 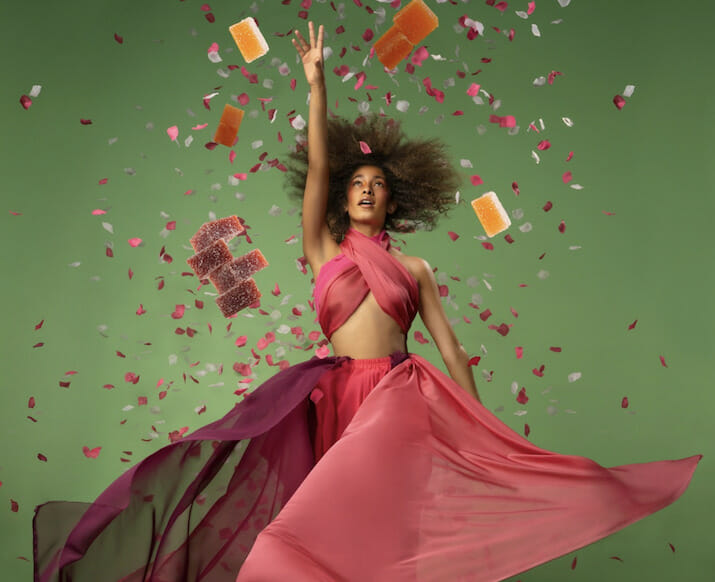 If you know me, you’ll know that at The Chalkboard, I’m basically the resident CBD specialist at this point—and by “expert,” I really just mean that I get to try a lot of hemp-based goodies and see how they make me feel. All in a day’s work!

Last summer, I had the pleasure of trying DankeSuper’s Pâte de Fruit, which was my intro into the world of Delta-8 THC, a minor cannabinoid derived from Delta-9 (the one that gets you high). While Delta8 didn’t get me high, it was a highly chill experience that showed me there were, in fact, many nuances to the #GummyGame.

So when I heard they had unveiled a whole new line of cannabinoid products—pushing boundaries that many have not been creative enough to push—I obviously said, “Sure, I’ll try your THCp Gummies!”  Note: I had no idea what THCp was, but I was told these gummies were twice as strong as DankeSuper’s OG Pâte de Fruit.

Listen, I’m no scientist. I really wasn’t even good at chemistry in high school (fun fact: my high school chem teacher got so frustrated with me during my final that he gave me the answers and I still didn’t get an A, but more on that later). But what I can tell you is that THCp is no joke when it comes to psychoactives.

THCp, also known as Delta-9-tetrahydrocannabiphoral, is yet another cannabinoid that mirrors that of its celebrity relative, THC. It was really only discovered back in 2019!

While it is found in very low concentrations in the cannabis plant, it is potentially 33x as potent as THC. I REPEAT: 33X AS POTENT.

See, the thing is: THCp and THC might interact with the endocannabinoid system (ECS) similarly, but THCp favors the cannabinoid receptors much more, binding to CB1 receptors up to 33 times more than THC. For those of you who need a quick cannabinoid refresh, the CB1 receptors play a major role in the brain’s ability to regulate the release of neurotransmitters like serotonin, dopamine, and glutamate. An exciting foreboding of what’s to come!

Without getting into atoms and alkyl side chains (what?), I’ll just tell you that because of THCp’s ability to securely attach to receptors throughout the body in a way that any psychotherapist would be proud of (that’s an Attachment Style joke, btw), it takes a smaller amount of THCp to impact the different functions of the ECS.

THCp potentially carries a lot of the same benefits as Delta-9 THC, just with an added dose of potency. Some include:

Now to the fun part—well, almost—how does one consume it? If you haven’t heard of THCp, that’s because you really can’t get it anywhere. DankeSuper is at the forefront of the cannabinoid movement, maximizing niche cannabinoids like Delta8, THCp, THC-O, and HHC in the coolest way possible by creating synergistic combinations in a really palatable format. Cut to your weed waiter saying, “Tonight’s menu is extremely fruit-forward.”

The D8 THCp Gummies are no exception.

Ideal for some serious R&R time, these gummies are considered a clinical strength high with 20 mg of D8THCp and 10 mg of CBD per gummy. To be clear, these gummies are not for a focused high, where you’re doing work or taking Zoom calls. These bad boys are for when you want to feel like you’re melting into your couch, leaving your body through deep meditation, getting a full night’s sleep, or forgetting that you have pain that nags at you every minute of every day. They take about 30 minutes to one hour to set in, and even the most experienced “weed heads” should take it slow when getting cozy with THCp.

DankeSuper recommends starting with a quarter or half square and cautiously increasing your intake over time, which will be a tough sell when you’re dealing with high-end blended fruit pairings like Blood Peach, Pomegranate Cranberry, Peach Ginger, and Morello Cherry. And this is real fruit we’re talking about, sourced from Le vergers Boiron, La Fruitière du Val Evel, and The Perfect Puree. Fancy!

Remember: it’s a marathon, not a sprint! Unless you want to relive that one time in college where you started hysterically crying because you all of a sudden couldn’t figure out where you were supposed to sleep. No? Not you, too? What Happened When I Ate D8 THCp

I have pretty much taken every kind of self-evaluation “test” there is. I’m a Virgo Sun, Pitta-Vata constitution, I/ENFJ, and a Type 1 (and sometimes 2) on the Enneagram scale. Why does this matter for this story? Because it means I’m hyper-analytical, restless, anxious-skewing, and some might even say organized!

But why does any of that matter? Well, because I’m someone who could severely benefit from a calm-inducing substance. Therefore, I was more than open and willing to try the D8 THCp Gummies.

I started my tasting the same way I began my Delta8 experiment: With a plan.

The content for the evening would be Netflix’s Chef’s Table: Pizza, and I would be doing nothing except performing a castor oil pack while lying flat on the couch. I had just returned from a trip from Europe and wanted to set myself up for an insane amount of rest. And yes, that was a brag re: my trip to Europe.

I started with a half (because I’m a Virgo, remember??) of the Peach Ginger, convincing myself the ginger would help settle my stomach from my travels.

First of all, the gummy was, as they say in French, delicieux (and I didn’t even go to France!). It’s very rare where something tastes like its given name, but I could so clearly experience both elements as if they were in their whole form. Can you tell I was watching Chef’s Table?

In less than 45 minutes, I could feel the soothing weight of relaxation hit, where I no longer felt of this world, if you know what I mean. This is going to sound super stoner-esque, but I felt like everything became extra 3D, and my senses heightened without peaking my cortisol levels. I think what I’m trying to say is I just felt super present in my body. I almost didn’t even notice that I was watching my show on my laptop because I still don’t have a HDTV (because I live at home and we’re fine with that).

Even though I was in a deep state of conscious meditation, I was still able to shower functionally, and get myself to bed. The best part? I didn’t feel slammed the next day in the way that I can sometimes feel like a train has hit me after a dropperful of CBD. Let me remind you, this was just from a half! Not once, but twice now, DankeSuper has undone all of my presupposed feelings about cannabis, cannabinoids, and “getting high” altogether. Whether it’s HHC for an energized, giggly high or THC-O for pain and sleep management, their ability to transform everyday experimentation into high-quality experiences makes me very excited for their combinations to come.