The Gut's Role in Parkinson's Disease 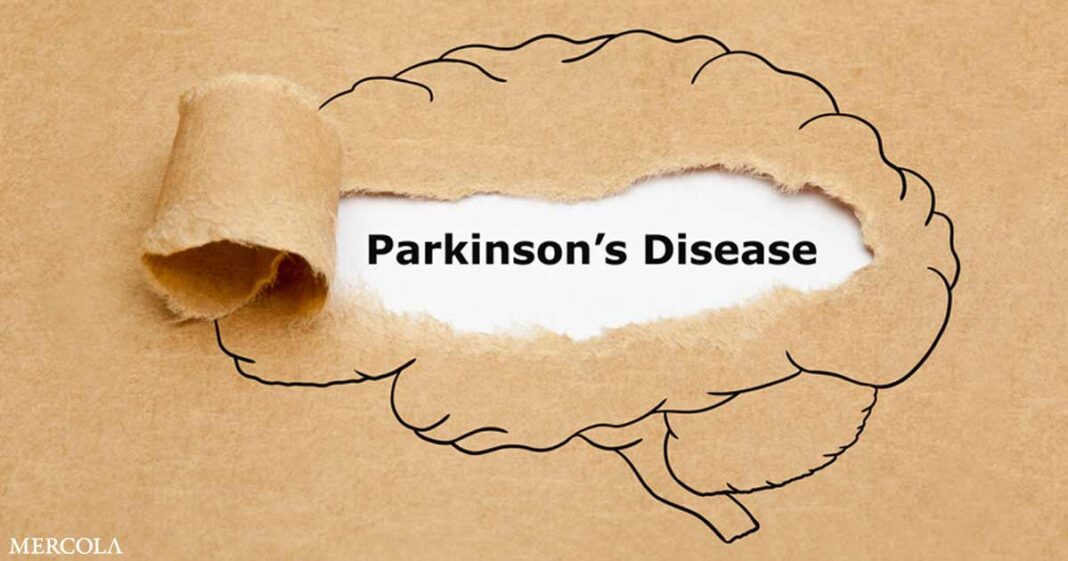 This article was previously published February 28, 2019, and has been updated with new information.

Parkinson’s disease is a neurological disorder in which neurons and dopamine-producing cells in your brain begin to die. Symptoms progress over time and include tremors, slow movements, rigid limbs, shuffling gait, stooped posture and an inability to move. Patients may also experience a reduced ability to make facial expressions.

While patients suffer significant physical disability, the condition may also trigger depression, speech impediments and personality changes. There is also an association with dementia. Parkinson’s affects as many as 7 million to 10 million adults worldwide, and approximately 60,000 Americans are diagnosed with Parkinson’s every year.1

Although incidence of the disease increases with age, an estimated 4% of those with Parkinson’s are diagnosed before the age of 50. Men are 1.5 times more likely to have Parkinson’s than women, and treatment can be expensive. Medications can an average $2,500 a year, while therapeutic surgery may cost up to $100,000 per patient.

A study2 published in the Journal of Parkinson’s Disease demonstrates an association between the development of this neurological disease and your gut microbiome.

The featured study focused on alpha-synuclein pathology, biomarkers and gut microbiome, and as other studies3 found alpha-synuclein plays a role in the development of familial and sporadic cases of Parkinson’s disease.

Unfortunately, diagnosis often occurs after brain cells have already been affected and died. For this reason, it’s more difficult to slow the progression of the disease, so researchers have been investigating ways to detect the condition earlier, which might positively impact treatment.

Past studies have demonstrated a link between the gut microbiome and Parkinson’s disease. This current review paper set out to investigate the most recent research available on this gut-brain connection.

Lead author Dr. Filip Scheperjans, from the department of neurology at the Helsinki University Hospital in Finland, believes understanding the role the gut plays in the development of the disease will help improve treatment.4

The review evaluated the involvement of an abnormal amount of protein aggregates associated with local inflammation and the impact on the gut microbiome. As noted by Scheperjans:5

“Our understanding and appreciation of the importance of the gut-brain connection in [Parkinson’s have] grown rapidly in recent years. We are confident that the coming two decades of microbiome-gut-brain-axis research will see an even accelerated development in this area that will reshape our understanding of the pathogenesis of [Parkinson’s].”

To this aim, the authors identified four key research areas where additional focus is needed:6

Alpha-synuclein is a presynaptic protein linked neuropathologically and genetically to Parkinson’s disease.7 While it may contribute to symptoms in a number of ways, the aberrant cells are toxic to cellular homeostasis, triggering neuronal death and affecting synaptic function.

Secreted alpha-synuclein may have negative effects on neighboring cells, including seeding aggregations, which contributes to progression of the disease. Detection of alpha-synuclein lesions in peripheral tissues has important clinical implications in the brain and peripheral organs.

Researchers have sought to identify potential pathways involved in the long-distance transfer of the protein from the brain to the gut, where it is found in those suffering from Parkinson’s disease. Although researchers have identified the alpha-synuclein protein in the development of the disease, the real function before the disease is triggered had remained a mystery.

Using a mouse model, researchers8 found increasing the expression of alpha-synuclein inhibited the mechanism of releasing neurotransmitters, essentially producing Parkinsonian symptoms. At normal levels however, the protein accelerated the release of these molecules if it was already occurring.

In another rat study,9 researchers were able to identify a specific transmission of the protein from the brain to the stomach. As explained by the authors:

“Following targeted midbrain overexpression of human alpha-synuclein, the exogenous protein was capable of reaching the gastric wall where it was accumulated into preganglionic vagal terminals.

This brain-to-stomach connection likely involved intra- and interneuronal transfer of non-fibrillar alpha-synuclein that first reached the medulla oblongata, then gained access into cholinergic neurons of the dorsal motor nucleus of the vagus nerve and finally traveled via efferent fibers of these neurons contained within the vagus nerve.”

The researchers believe the dorsal motor nucleus of the vagus nerve is a key relay center for transmission of alpha-synuclein proteins from central to peripheral locations. The presence of these proteins may represent an ongoing pathological process originating within the brain that can then affect other organs innervated by the motor vagal nerve.

Currently there is no cure for Parkinson’s disease. In one study,10 researchers described aspects of the disease as suppression of the autosomal-lysomal autophagy system, a systemic degradation of your body’s functional components due to cell destruction, characterized by the loss of dopamine transmitting neurons in a section of the midbrain.11

By activating autophagy, in essence repairing the dysfunctional mechanism, researchers believe neurodegenerative diseases may be successfully treated. Autophagy literally means “self-eating” and refers to the process of eliminating damaged cells by digesting them.

It is a cleaning out process that encourages the growth of new healthy cells and is foundational to cellular rejuvenation and longevity. Researchers explain the process in a paper published in Nature Reviews Drug Discovery,12 saying the pathway is involved in a variety of human health conditions, including metabolic disorders, neurodegenerative diseases, cancer and infectious diseases.

In response, there has been considerable pharmacological interest in inhibiting the pathway and upregulating autophagy as a means of therapeutically benefiting those with neurodegenerative diseases. In essence, this would clear out harmful protein aggregates that trigger symptoms and disease progression.

“Activating autophagy is a double-edged sword. One [sic] the one hand, the process clears toxic or infectious materials from cells. On the other hand, if the autophagy process goes beyond ‘recycling’ and clearing out proteins, it can start to destroy the cell, leading to cell death.

This means that autophagy must be carefully manipulated to avoid the death of nonrenewable and irreplaceable neurons.”

The good news is you don’t have to wait for a drug to be developed to improve autophagy. One of the easiest ways to do this is through fasting, which I discuss further below.

Mucuna pruriens (M. pruriens) is a climbing legume best known as a natural source of L-dopa, a dopamine precursor that affects energy, motivation and well-being, and is often used in the treatment of Parkinson’s disease in Ayurvedic medicine.

M. pruriens is a well-known source of protein in tropical areas of the world. Also known as the velvet bean, kapikacchu and cowhage seed, these legumes are a vigorous, annual plant, boasting nearly 100 different varieties. The legume originated in southern China and Eastern India, but now grows in tropical areas worldwide.

The plant has dark brown or speckled seed pods that are about 4 inches long and contain four to six seeds each. Although the bean is highly beneficial, contact with the pod may result in severe skin irritation and itching. When the beans are used for food, they are soaked until they sprout, then boiled and ground into a paste used in cooking.15

When used medicinally, the beans are boiled to remove the enzyme coat, then strained and dried. The kernels are ground into a fine powder commonly mixed with water and taken orally. The practice of using M. pruriens can be traced back thousands of years within the practice of Ayurvedic medicine.

The seeds are roughly 4% to 7% L-dopa, which easily crosses your blood-brain barrier, accounting for the interest in those seeking natural treatments for Parkinson’s disease.16

Although clinical trials have demonstrated its ability to produce equivalent or better results than medications, without side effects, Western medicine continues to use and promote a synthetic form of L-dopa in the treatment of Parkinson’s disease.

If you have the disease and would like to investigate this natural treatment, consult with your doctor or an Ayurvedic medicine practitioner before taking M. pruriens, especially if you are currently taking prescription medication, to ensure this remedy is right for you.

It may also be possible to prevent neurodegenerative diseases or reduce symptoms by addressing your gut permeability and autophagy dysfunction through natural means.

How to Decrease Your Gut Permeability

Your gut microbiome is an important part of the future of medicine. Nearly 15 years ago scientists believed the Human Genome Project would find information necessary to create gene-based therapies to produce cures for most health conditions.

Now science has learned genetics are responsible for only 10% of all human disease, while the remaining 90% are triggered by environmental factors.17 With further research and study, science is now coming to realize your gut microbiome is actually driving genetic expression, turning genes on and off depending upon which microbes are present in your gut.

You can improve the health of your gut microbiome, and thus may make significant changes to your health, through small lifestyle changes, such as eliminating sugar, using a cyclical ketogenic diet and including plenty of fiber rich foods.

How to Improve Autophagy

Your body was built for periodic cycles of feast and famine. Through intermittent fasting, you can enjoy improved cardiovascular health, reduced cancer risk and better gene repair and longevity. Fasting also helps support your immune system function and has a beneficial impact on your brain function as well, by boosting brain derived neurotrophic factor (BDNF).

Depending upon the region of the brain you may experience a boost from 50% to 400%. BDNF activates stem cells to convert into new neurons and triggers numerous other chemicals promoting normal health. This protein also protects brain cells from changes associated with Parkinson’s and Alzheimer’s disease.

Fasting is a powerful way to activate autophagy, but should not be done willy-nilly. If you are on medication, you need to work with your doctor to ensure safety as some medications need to be taken with food. Diabetics who are on medication also need to use caution and work with a health professional as they may need to adjust their medication dosage to avoid adverse effects. I also recommend you continue taking nutritional supplements and to take a high-quality salt.

One of the reasons I’ve reverted back to advising caution with water-only fasting is because multiday water fasting is very effective at liberating stored toxins from your fat, which can cause problems if your detoxification system isn’t properly supported.

While I’ve done several five-day water-only fasts in the past, I’ve now switched to a partial fast that supplies many of the nutrients your body needs to support your detox pathways instead. It involves a base of intermittent fasting for 16 to 18 hours, and once or twice a week you have a 300- to 800-calorie meal loaded with detox supporting nutrients, followed by a 24-hour fast. So, in essence, you’re then only eating one 300- to 800-calorie meal in 42 hours.

Using an infrared sauna and taking effective binders, like chlorella, modified citrus pectin, cilantro and even activated charcoal can help eliminate liberated toxins from your body and prevent their reabsorption.

A gentler way to still improve autophagy is daily intermittent fasting, providing you are not eating for at least 16 hours. You can also activate autophagy by alternating high intensity interval training or resistance training with a day of rest.

11 Best Pots and Pans Organizers to Maximize Your Space

How To Stay Motivated in an Online Course: 10 Tips For Success

Nordstrom lays off over 200 workers at supply chain facility

How Social Media Has Impacted Daily Sunscreen Use