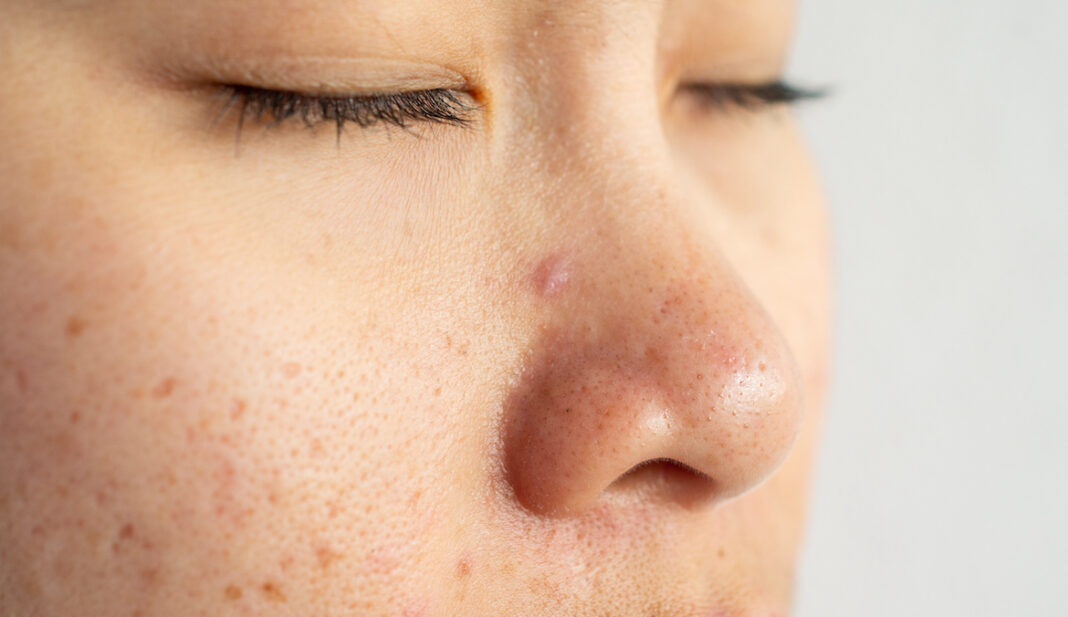 Nearly my entire high school experience (three-quarters of it, to be exact), was spent dealing with acne. Month after month, my face populated with pimples as tears ran down my face because nothing I did could the breakouts at bay.

After working with a doctor for a year, I had tried a pharmacy’s worth of prescription pills, a dozen topicals, and double cleansing, but the pimples persisted—as did the scarring and the tears that came with them. Nothing was working, and it felt like it was me and my pimples against the world.

When a devastating dermatology appointment ended with me getting yelled at for crying (… I’ll reserve my thoughts on that particular professional’s bedside manor), I made the decision to stop treatments—I was done. But unfortunately, my breakouts were not. I managed to live with them for about 6 months, and spent most of that time trying to convince myself that they were improving. I found comfort in knowing that 85 percent of people deal with acne at some point in their young lives, and tried to convince myself that it was no big deal, despite the wave of anxiety for the future of my skin that would overcome me with each new breakout.

Finally, I caved and asked my family doctor to refer me to a different dermatologist, who prescribed me isotretinoin.

Isotretinoin, which you may know as its more common (but now out-of-date) brand name, Accutane, is a vitamin-A derivative used to treat severe, cystic acne. It falls under a class of products known as retinoids, and is usually prescribed when other OTC and prescription products—like benzoyl peroxide and plain old tretinoin—have failed. It works by permanently shrinking oil glands, making it unique in the way it functions to prevent breakouts.

“Isotretinoin is the closest we have to a cure for acne,” says Joshua Zeichner, MD, a board-certified dermatologist and the director of cosmetic and clinical research in dermatology at Mount Sinai Hospital in New New York City. “I typically use it in people with severe nodules and cysts, in people who are not responsive to other treatments, or in people who are developing physical or emotional scars. Some people are genetically more likely to develop scarring in the skin, even from mild acne. Because scars are permanent, I will use isotretinoin to prevent them from developing in predisposed patients. I will also use isotretinoin in patients who do not objectively have severe acne, but do have a significant impact on their emotional well-being [related to their acne].”

“Isotretinoin is the closest we have to a cure for acne,” — Joshua Zeichner, MD

Though isotretinoin is undoubtedly effective, it doesn’t come without its fair share of side effects. “Isotretinoin decreases activity of the oil glands significantly as oil production decreases, which can lead to significant dryness of the skin and the lips,” says Dr. Zeichner. During the first few weeks, most people experience skin purging, followed by dryness, irritation, and sensitivity for the rest of the regimen.

On a more serious note, there are some side effects that go well beyond the skin “Rarely patients can develop headaches, blurry vision or joint aches, and the medicine can affect your liver and can raise your cholesterol levels. It can also lead to birth defects, which is why women of childbearing potential must be on two forms of contraception while they’re on the drug,” says Dr. Zeichner. “…Because of the side effects, patients are at their dermatologist once per month for in-person evaluation and blood work while they’re on the drug.”

For me, personally, the rewards that isotretinoin promised made it feel worth the aforementioned risks that came along with it. So a few derm appointments and some blood work later I was ready to start my course of treatment.

When I started Accutane, I expected my skin to immediately get dry and start to purge. Instead, I had an aching back, which shouldn’t have been surprising given that joining pain is a potential side effect of the medication.

Two weeks later, though, the purge began—and it was painful. Even after three years of dealing with acne, these were some of the largest, most deeply-rooted pimples I’d ever experienced. According to Dr. Zeichner, this was to be expected.

“Think of isotretinoin as a super pipe cleaner, pushing out the blockages within your pores,” he says. “The blockages in your pores have only one place to go, which is out, so in terms of the face, things actually get much worse before they get better.”

My skin wasn’t dry, but my lips did start to peel which—though I didn’t know at the time—was a foreshadowing of what was to come.

During my monthly doctor’s appointments, I found out my cholesterol was high as a result of the medication. Even though I knew this was a possibility, I was still in shock. It made me worry that I wasn’t taking good enough care of myself, and days later I was crying while watching old episodes of Community.

At the same appointment, I was also told that I needed to avoid upper body exercises to protect my aching back—news that bothered me more than I would have expected. I was already toning down my workouts so as not to injure myself with my ongoing back pain, but I suspect it had to do with a sense of finality that came with the advice that pushed me into tears. It forced me to accept that the pain wasn’t going away so long as I was on the medicine, and that wasn’t a pleasant realization.

As for my skin, I was told that it looked better. The dermatologist told me to look at old pictures so I could see the improvement, but I wasn’t convinced. All in all, I didn’t feel good.

By month three, I was finally experiencing the skin dryness that everyone told me to expect. Though it was physically irritating, it was a much-needed reassurance that the Accutane was doing its job.

It wasn’t a particularly cold fall, but I spent the month of October wearing mittens because my hands were so dry. I applied copious amounts of Vaseline all over my body, but particularly on and around my lips, and relied heavily on First Aid Beauty’s Ultra Repair Moisturizer to keep my dry skin from getting even drier. Dr. Zeichner touts the importance of lip balm and twice-daily moisturizing for anyone taking Isotretinoin, but notes that in some cases, skin can become so compromised that dryness turns to eczema, which may require a prescription anti-inflammatory to treat.

Alongside the dryness, another symptom that remained consistent was my elevated cholesterol. Although I did my next several blood tests fasted, the elevation remained. My dermatologist reassured me that this was normal and within a range that didn’t warrant changes to my medication course or lifestyle, which was good news.

In general, it was a pretty uneventful month, and my dermatologist decided to bump up my Accutane dosage by 10mg from 50mg to 60mg.

Throughout months four and five, my skin continued to get even dryer—the skin inside my nose started to peel, and my pregnant aunt and I laughed together about our bloody noses. In December, there was a mix-up with the doctor’s office that had me believing for a few tumultuous, tear-filled hours that the Accutane had spiked my blood sugar to concerning levels—but thankfully, that turned out to be a mistake. My cholesterol was still elevated and my back pain ensued, but my dermatologist continued to assure me that neither of these things was cause for concern.

When I finished my last blood test at the end of my course of treatment, I almost cried tears of joy, but decided to give my phlebotomist a hug instead. After five months, a few hundred pills, and a couple of panic attacks, I was finally done with Isotretinoin.

As I write this, four months after taking my last Isotretinoin pill, I’m happy to report that my dermatologist considers my acne case “cured.” All of the symptoms I experienced subsided shortly after I finished the medication, and my skin is no longer breaking out. For the first time in a long time, it doesn’t feel like my body hates me.

Accutane was one hell of a journey, but seeing my clear complexion makes it all seem worth it. Everyone’s skin experiences are different, and this is only a small portion of mine. It was chaotic and it was long, but with the right medication and support system, it got better. Now, onto treating the scarring.